How was Walt unharmed after throwing the mercury fulminate on the floor in Tucos office?

Later, Walt visits Tuco to make a deal and get the money he owes. While there, he throws mercury fulminate on the floor. It causes an explosion that blows out the windows. How come Walt wasn't harmed?

Basically, he was harmed... 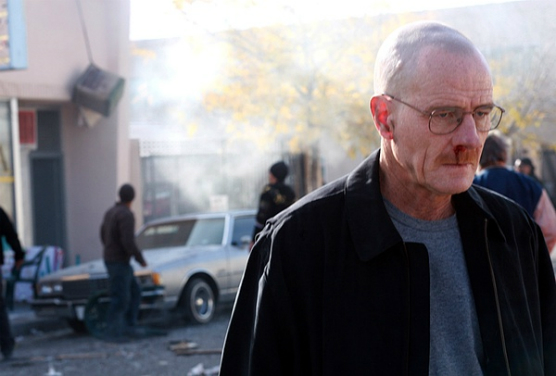 The visible effects are the blood dripping from his nose and his ears, but this is symptomatic of possibly more serious (although obviously not life threatening) internal injuries.

If you're asking why he wasn't as badly injured as the rest of Tuco's crew, it's because they had no idea what was about to happen and he was entirely aware (being the propagator of the attack)..

Walt wasn't disorientated, confused or alarmed, unlike everyone else in the room who just experienced the physical effects of a surprise explosion!

Not to mention he was all jacked up on adrenaline..this is the more or less the beginning of his Heisenberg persona.

27
Why would Gus do business with Walter knowing his brother in-law was a DEA agent?
15
How did Saul find Walt?
7
Would Mike's guys have gone to jail bar the bomb?
6
How did Walt get shot?
14
Why does Walt talk about Victor?
6
How did Walt know where Lydia was going to sit?
7
After what happened to Gale, was Gus still planning to kill Walt?
7
After the events of S4E11, why didn't Gus shadow Walt?
9
What was Jack's motivation in Felina?
3
After being rescued from captivity by Walt, why doesn't Jesse immediately surrender to the police?