Explanation of scene in the Official Story (La historia oficial)

In the movie, when Alicia goes to Roberto's workplace to see him, there is a man who's nervous and very impatient about seeing Andrada. He's afraid of being put in jail, but Roberto and his co-workers dismiss his worries "over a silly summons by a judge."

They say they will take him to see Andrada, but after they take him off camera for a little while, Roberto asks "What's wrong?" and we see the co-worker half-dragging the man into a room. The co-worker says everything's fine and tells them to go catch their flight, then shuts the door.

After a bit, when they are getting in the elevator, Alicia sees someone open the door to the room and walk out, and it seems like the co-worker is straightening the man's collar or something while he's semi-conscious. We don't see anything else, however, and it cuts to them driving to the airport.

What was he doing to the man? And what are we supposed to infer from that? 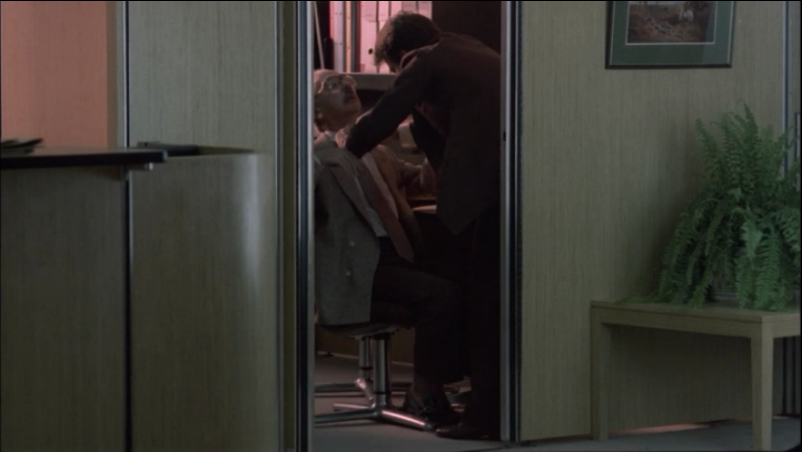 They grabbed him, called Macci, and took him into some office so the american walking to the elevator wouldn't see him ranting. He had complained in an earlier scene that he was only following orders and he was scared, saying "I won’t go to jail!" Is not clear if Macci was killed or not, but looks like if they are about to kill him.

His coworkers were afraid that he might say something that compromise them or put them in jail. Roberto was a friend of some members of the junta and that implies the company that Roberto worked for had benefited from them, but at that time started to be evident that the junta was going to be booted out of power due to raise of economy and social issues. The scene implies that people were disappeared to cover up the junta's tracks and some companies were in close ties with them.

Also, one important thing of this scene is to notice that killing could be a natural action for some ordinary people, not only militaries, an we can also watch Alicia not been so impressed with that, so we think she couldn't be so naive about Gaby’s parents.