What is the nature of the creature living in the ruins of Bethmora?

Near the end of Hellboy II: The Golden Army, when the team reaches the ruins of Bethmora, Liz and Hellboy are led by some lone goblin into a chamber where they meet some other creature who lives there, depicted here: 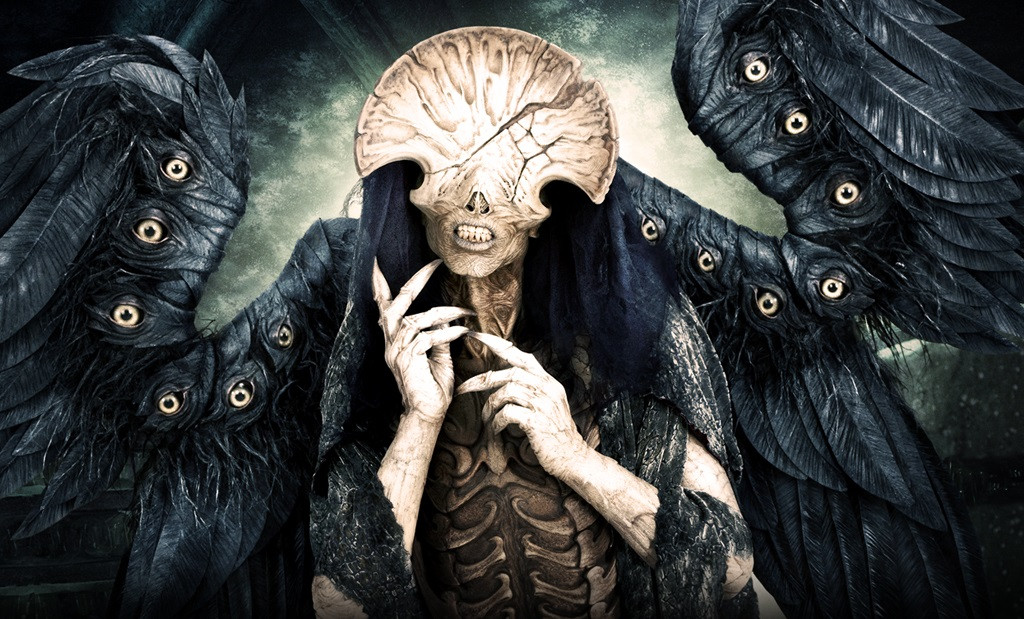 This creature seems to be somehow all-knowing or at least knows about Liz and Hellboy's true name and fate and makes prophecies about the future (and says it waited for Hellboy for a long time). It is also able to magically heal Hellboy from the serious injury he received from Nuada, with no effort from one second to the other. All in all it seems quite observant and indifferent to the world's actual fate.

While there is no doubt that this movie is full of weird and mysterious creatures, this one with its somehow decayed yet majestic and elegant appearance and its rather strange powers and mysterious aura was kind of fascinating, especially when found at such a desolate place. So is there any further information what this creature is all about? What are its background and motives and what does it do alone in the lost ruins of Bethmora?

She is Angel of Death.

Jones explained his portrayal, "The script refers to the angel as a her and that's what I do. I think she has feminine qualities, but she's not totally a woman either. And that's okay. I like characters that keep you guessing (Source: Wikipedia)

She is just one of the made for movie character and kept to make a guessing game around viewers or as an open end for sequel.

Not the answer you're looking for? Browse other questions tagged plot-explanation character hellboy-ii-golden-army .

11
What is Godzilla and what does he know and want?
12
Was Arrow's change in moral alignment motivated by his audience?
9
What was the official purpose of the fuel pod hauled by Furiosa in Mad Max: Fury Road?
5
What was the nature of Dobby the Elf?
5
What was the matter with the writer who didn't have an invitation to the show?
8
What happened to Claire?
3
What creature is Vanessa Ives?
0
What is the nature of the Nuclear Family?
3
Was Mirage (Syndrome's assistant) an innocent dupe - or complicit in murdering supers in "The Incredibles"?