Why can the Doctor not read River's Diary?

I don't watch Doctor Who on a regular basis. I know who River is. But why is it that she keeps the diary of their meetings and the doctor cannot see it?

In the Tardis Data Core website, it talks about this:

Upon saving the Doctor's life (after nearly killing him herself) by giving up her remaining regenerations, River ended up in the best hospital in the universe. It was there that the Doctor gave her the diary. This was done to make sure she kept track of their meetings to keep their timelines from becoming corrupted.

In the 52nd century, in Stormcage, River was writing about one of her outings with the Doctor before taking a phone call from Winston Churchill and escaping to help her husband.

After the Doctor reset the universe at the cost of his own erasure from existence, River temporarily gave her mother her diary as a wedding present to bring him back. Later, the Doctor returned the diary to River, telling her that all the writing had returned, but he hadn't peeked; foreknowledge is dangerous.

The last line spells it out. If the Doctor has the information contained in River's diary, he'd have knowledge which might be dangerous not only to himself, but to the Universe as a whole.

River and the Doctor are both time travelers, for reasons which are never quite explained they tend to meet each other in the wrong order (as one knows more about their history the other knows less).

The diagram below shows this (click for larger version): 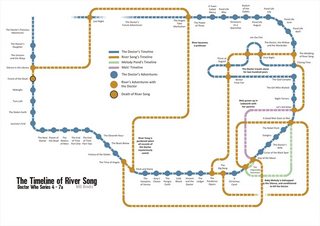 (Source: Will Brooks on Deviantart)

Through the series the diary actually pops up a few times. It was only after she met him for the first time (Let's Kill Hitler) the Doctor actually gave it her as a gift thus completing the cycle which and explaining how he ends up with the diary when he meets her for the first time (Silence in the Library).

As River has already experienced a lot of the adventures the Doctor hasn't had yet her diary contains his future. As such they've imposed a set of rules (which they jokingly remind each other as "spoilers") in reality the Doctor implies that it's very dangerous for either of them to know their own future.

3
Wasn't River crossing her own timeline?
7
Was the Silence Prophecy fulfilled in The Name of the Doctor?
11
Why did the Doctor call River "Mrs Robinson?"
5
Why is the Doctor sometimes afraid to die (or actually does die) instead of regenerating?
6
How does Sarah Jane meet the Doctor?
14
Is the 8th Doctor really half-human on his mother's side?
4
Is the Doctor doing anything in this scene?
0
Creepy Ancient Lady in the Bathtub in Doctor Sleep
5
Is Peter Capaldi the only Doctor to play another role in Doctor Who?