How did Nomak learn about the supposedly secret location where Blade was being held?

As per the ff: dialogue between Kounen and Blade in the film, Blade II:

KOUNEN: But fortunately for us, he doesn't know this location.

Kounen was talking about Nomak in his line above. The above dialogue was followed by a scene of Nomak attacking the vampires' security forces in the supposedly secret location where Blade was being held.

How did Nomak learn about the supposedly secret location where Blade was being held? Was Blade at some point able to communicate or let Nomak know about the location?

During the sequence in the tunnels, Blade is buying time for the remainder of the Bloodpack to get clear, as they will be affected by the UV bomb and Blade is unharmed by sunlight. 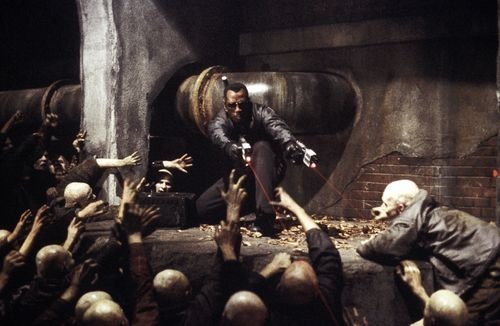 The UV bomb's remote detonation fails, meaning Blade has to get to the package and trigger it manually. In order to draw the Reapers towards him, Blade smashes a vial of Reaper Pheromones on his chest, making him a distinctive, traceable target for Reapers.

None of The Bloodpack are present at this point, and as such they would not know that Blade had
done this, which would explain their surprise when Nomak is able to trace him so easily.

Blade led (or should I say bled) him right to the location.

David Goyer's script makes it clear in the dialogue that immediately followed your quoted quote:

Not the answer you're looking for? Browse other questions tagged plot-explanation blade-ii .

7
How do studios decide which movie (classic) to release on Blu-ray?

6
Does Vinay know Anjali before meeting her at the jewelry shop?
11
What game is it Bond can't afford to play?
11
How did the Court prosecute Col. Jessup in A Few Good Men
4
Why did Sean get onto the plane in the Event?
8
What was the purpose of keeping Castor Troy alive after the face transplant procedure?
8
How does Batman know that Clark is Superman?
8
Why did the President still send the FBI after Benjamin Gates?
0
How was Abraham Whistler still alive in Blade II?
1
How does Malcolm get the idea in the end?