Why is there an umbrella man in this Breaking Bad song?

I'm curious why there is a guy holding an umbrella during the song "Los cuates del Sinaloa". 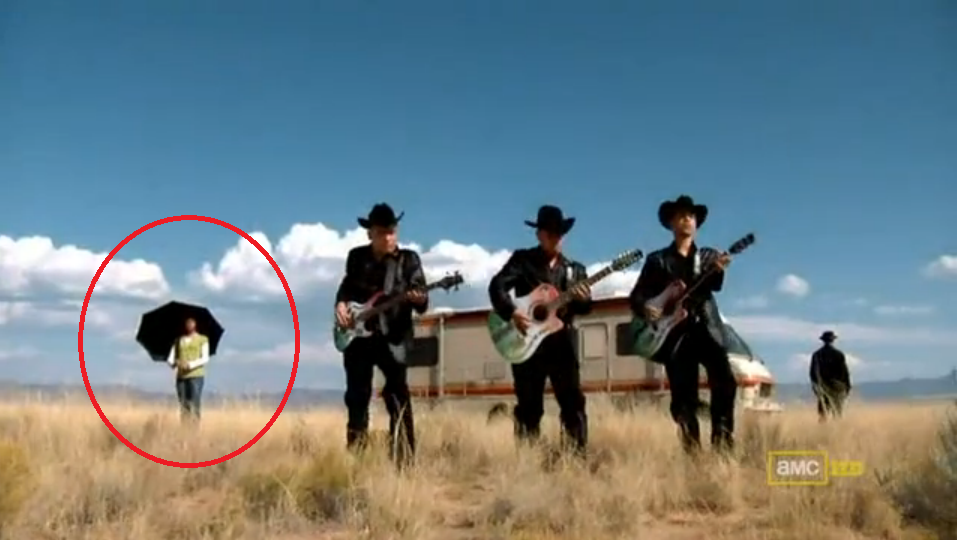 The only explanation I can imagine is that it's a reference to the Umbrella Man.

The "Umbrella Man" was a witness of JFK assassination. This generated many conspiracy theories, but none of them were true. So it might mean to stop analyzing every frame of the show.

The band is called Los Cuates del Sinaloa (The Guys from Sinaloa), and the song is called Negro y Azul (Black and Blue). The song is a narcocorrido - a drug ballad which tends to glorify drug lords. This type of music has become very popular in Mexico as bands write and sing about the battles between drug dealers and the federales and then post videos online. The lyrics for this ballad refer to a gringo named Heisenberg whose face has not been seen (he is to the right faced backward in the video). Black and blue refer to Heisenberg and his blue meth (as well as the color of bruised skin).

Possible meanings for the umbrella

The band is an actual narcocorrido band that was hired to perform the ballad (written by Pepe Garza) for the show. In an article about drug operations in Sinaloa (where they are from), Fox News reports that the umbrella is the symbol of the unregistered currency changer (American dollars for pesos) who launders money from the US in Sinaloa's "little market." This may have influenced their choice of the umbrella that Jesse is holding as he is the business end of the operation (though the currency changers are usually women with body guards, and the umbrellas may not be black as they are also sun protection).

Another possibility is the symbol of the umbrella (El Paraguas) from Mexican Loterias cards, which stands for being prepared in any situation, good or bad.

The umbrella was also a favorite symbol of the surrealists, and its odd presentation in unlikely places lets you know that you have entered a space that does not operate in an ordinary way. This is the interpretation that I am personally inclined toward, as my first impression on seeing the photo above was that it reminded me of a Magritte painting (actually multiple Magritte paintings) which featured simple settings, blue skies with puffy white clouds, black umbrellas, and faceless or backward men in bowler hats.

There is a short film about the making of Negro y Azul at amctv.com.

If it symbolizes anything, it symbolizes the storm that is coming for Heisenberg, the one they sing about in the song ("he doesn't know it yet, but he's already dead").