Why does Walt use tracer bullets for his machine gun?

As it can be clearly seen in the first and the last episodes of the fifth season of Breaking Bad, the ammo boxes in Walt's car say that there are tracer bullets in them. Why is that? It wasn't explained in the Talking Bad episode that followed right after the last episode, because it wasn't as important as the other things they only had an hour to talk about live, but I think it's still peculiar. 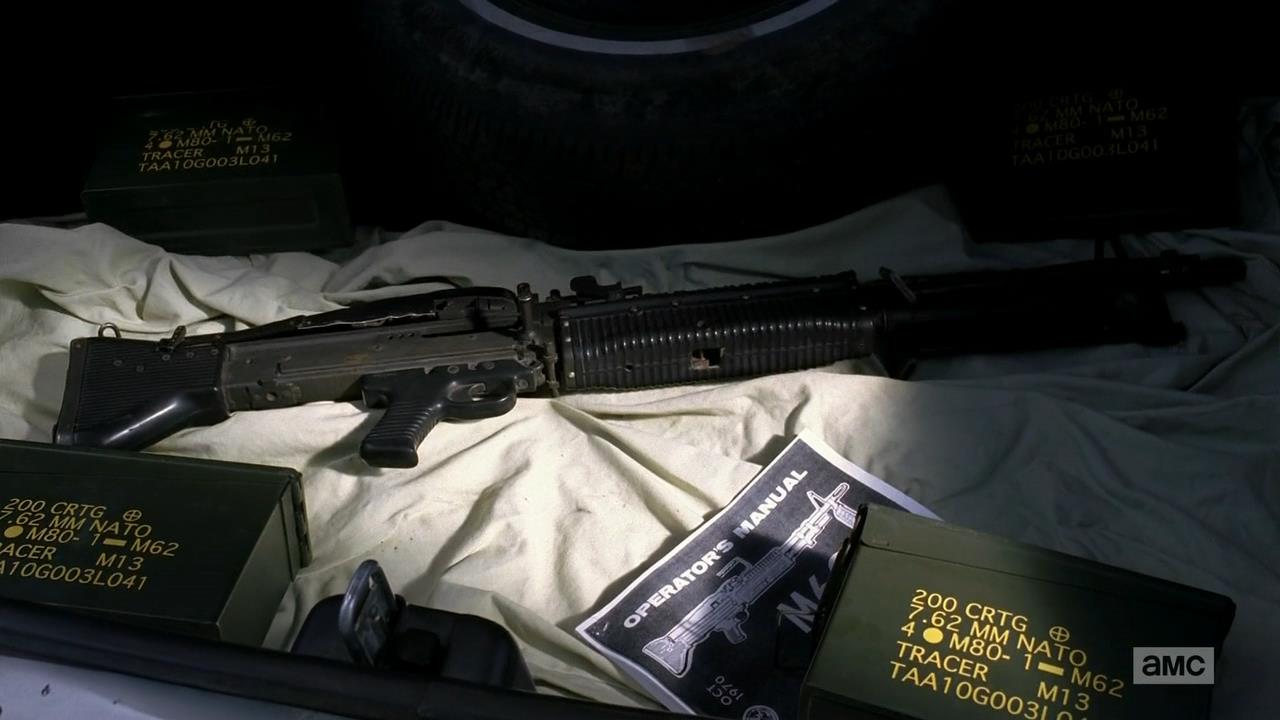 Why tracer bullets and not the ordinary ones? As far as I know tracer bullets only "ignite" at least about flying for ten meters or so, and there wasn't even that much distance between the gun and the back wall of the club house the shooting took place at.

It looks as though these are portrayed as standard US Military issue rounds. For this type of round, every fifth round is a tracer round ... it's the way they come in the can. Tracer rounds ignite as soon as the bullet is fired, which means they are glowing when they have left the barrel of the gun. The 7.62mm round fired out of the M60 will stay lit out to about 900 meters (max effective range of an M60 machine gun is 1100 meters). To give you a better idea on tracers, here is the excerpt from wikipedia:

Tracer ammunition (tracers) are bullets or cannon caliber projectiles that are built with a small pyrotechnic charge in their base. Ignited by the burning powder, the pyrotechnic composition burns very brightly, making the projectile visible to the naked eye. This enables the shooter to follow the projectile trajectory to make aiming corrections.

When used, tracers are usually loaded as every fifth round in machine gun belts, referred to as four-to-one tracer. Platoon and squad leaders will sometimes load their magazines entirely with tracers to mark targets for their soldiers to fire on. Tracers are also sometimes placed two or three rounds from the bottom of magazines to alert the shooter that their weapon is almost empty.

Tracer rounds may also ignite flammable substances on contact from a nominal distance.

As I stated, this is just the way the ammunition comes when pre-packaged for military use.

51
Why does Walt leave his watch at the gas station?
13
Why did Walt leave his gun on the couch when Jesse came to confront him?
26
Why does Jack let Walt go?
6
who was phoning in reports of Walt being back in town?
18
Why did Tomas have to die?
12
Why does Walt "try to take credit" for his crime?
7
Why did Jesse Pinkman leave Walter White?
7
Why does Walt refuse to ask his mother for money, or even tell her he has cancer?
9
What was Jack's motivation in Felina?