What is the significance of a man sitting on the train engine in the last scene of "Live and Let Die"?

In "Live and Let Die", after Bond throws Tee Hee Johnson from the train window at the very end of the movie, and returns to Solitair, we see an image of smiling Baron Samedi sitting on the train engine: 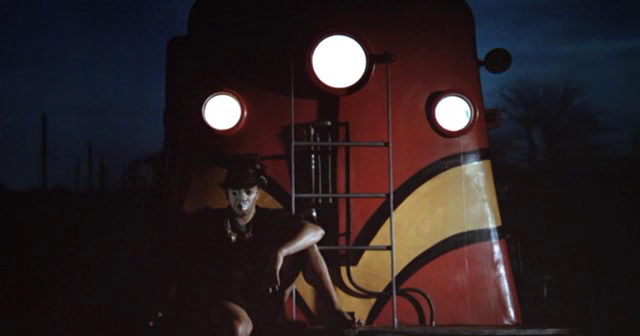 ... despite the fact that in an earlier scene, Bond killed Samedi by kicking him into a coffin full of snakes.

Wikipedia has this to say on the topic:

Later on, Bond witnesses Baron Samedi rising from a grave, and shoots him in the forehead; however, it is revealed to be nothing more than an animatronic dummy. Only minutes later, however, the real Samedi rises from the grave and engages Bond in a machete fight. Bond kills him again by pushing him into a coffin full of snakes. But just before the end credits roll, Samedi is seen riding on the front of Bond and Solitaire's speeding train (laughing), suggesting that he either survived falling into the coffin of snakes or that he was not mortal to begin with - that he really is "the man who cannot die". Because of this, he is probably the only James Bond 007 character to take on a supernatural basis rather than reality itself.

Was there ever any clarification on the point of this shot from someone involved with the movie (as opposed to pure guessing in Wikipedia)? Was Samedi merely not killed by snakes, or were the creators intentionally showing him to be immortal/supernatural?

Live and Let Die is generally regarded as the one and only 'supernatural' entry in the Bond franchise, and this would go some way to explaining Baron Samedi's apparent indestructibility.

The character of Baron Samedi is actually based on a voodoo deity rather than a real person, and one might suppose that this would account for his otherworldly powers. It should also be noted that he is not a strictly 'villainous' character - the baron is relatively neutral in his meddling with the affairs of the living, and so does not need to die (as befits Bond baddies in general).

There were also rumors that the Baron would be returning in one of the following films- but these rumors are uncorroborated.

The creators were intentionally showing him to be immortal/supernatural. The character was based on the Voodoo (Vodou) legend of Baron Samedi, who is one of the Guédé, a loa of the dead. Baron Samendi is the head of the family of ancestral loa and embodies the powers of death and fertility. He is the ultimate suave and sophisticated Vodou Spirit of Death.

Depending on the tradition followed, Baron Samedi is:

In any of these configurations, Baron, Maman Brigitte, and the Guédé rule death, the cemetery and the grave. He is a supernatural being.

The ending of the film, with Baron Samendi on the train, was meant to be ambiguous. Partly because the character himself was so ambiguous.

Earlier in the movie, Bond shoots a Samendi in the head, where that Samendi's eyes roll up as if to inspect the damage. Bond then shoots at that Samendi again, causing it to collapse as if it were just a porcelain mannequin. A few moments later, another Samendi pops up - it's this one that Bond physically fights with and knocks into the coffin filled with snakes.

So clearly, something metaphysical was going on, but what exactly was going on was never elaborated in the movie.

"Was there ever any clarification on the point of this shot from someone involved with the movie (as opposed to pure guessing in Wikipedia)? Was Samedi merely not killed by snakes, or were the creators intentionally showing him to be immortal/supernatural?"

You could ask Roger Moore he's got a website where you can ask him questions. Tom Mankiewicz, Cubby Broccoli and Geoffrey Holder are no longer with us having been taken by Baron Samedi... as has Ian Fleming

My own interpretation is that Geoffrey Holder is playing two characters. Early in the film he is playing a person playing Samedi for the tourists and Kananga. We see him in at least one scene playing a flute of some kind not in the costume of Samedi telling Bond and Solitaire it is a "beautiful morning" in the graveyard so it is strongly implied that there is a real person ...who may be strongly under the influc. I take it that this real person is killed in the coffin of snakes but, of course, Samedi himself cannot die as he is an immortal so appears again at the end of the film. I guess it is allegorical. At this point Holder is playing Samedi himself not the man Bond killed. No one knows for sure that's part of the fun but we can read something into Fleming's title Live and Let Die. It is of course a play on Live and Let Live but it also has a secondary meaning here as Samedi's role in vodou is as Loa of Ressurection. It is he who decides who lives and dies and only the Baron can decide who moves from the world of the living into the world of the dead. Unlike the grim reaper who is ...well grim ... Samedi enjoys all human vices and chaos so he is laughing at the chaos he has created.

In the book Kananga (a satire on Papa Doc Duvalier) surrounds himself with the paraphernalia of Vodou and Samedi to intimidate people as it's difficult to explain this on film someone obviously hit upon the clever conceit of having a person playing someone playing Samedi so there is a play within a play ...if you follow that. Or something ...

Most people tend to believe that ending happened due everyone falling in admiration for Holder. He was not only the actor who played Barron but he was also the choreographer and did all the dancing scenes. He did a lot to help the film out and he was a great guy I understand why they did that. Moore himself knew Holder and his brother from their younger days (he admitted that on the 2006 commentary.) He also got son of one of his favorite actors cast as the agent who was stabbed in New Orleans at the start.

It never worked out due to that movie being a fad and the horror esque elements. But it's nice to see his role was treated with respect. There is now way for that character to work unless he lived. Without that ending that character would have been a lame charlatan and not as lovable.

As for the answer in the movie I always found it vague. But when theorizing I say 1 of 3 things:

Regardless we all won because the Baron was such a great character and helped make the movie worthwhile.

My interpretation of the Baron at least as of now is that he is indeed a super natural entity as evidenced by his Hypnotic hold on San Monique. The Baron could never really be defeated by Bond as evidenced by how easily he fell into the coffin of snakes even though he could probably have killed Bond in a split second or less. Although the film doesn't provide any evidence as to how the Baron survives my theory is that his true spiritual form that has existed for all eternity formed him a new physical body. The Barons face is painted white on one side to not only represent the themes of Blaxploitation found in the film but also the struggle between order and chaos. Live and let die is evidently from my point of view a film about the Baron himself and not about Bond fighting Mr Big/Kananga. If you want proof of this look at the tile "Live and let die" this is clearly an allegory of the eternal nature of the Baron the god of the dead. If the Baron truly is supernatural and I believe he is then do other Gods exist in the Bond verse? If so will we ever see them? Hopefully this answers your question.

Not the answer you're looking for? Browse other questions tagged analysis james-bond live-and-let-die .