What is the name of a movie on [adult swim] where children run around an empty Tokyo-esque city? [closed]

I remember watching a Japanese anime movie on [adult swim] years ago about a group of children wandering around a city that resembles Tokyo, with lion statues and torii. I've looked through this list but none of the movies listed match what I remember. For a long time, I thought the name of the movie was Battle Royale, but I later learned this was false. I think the reason I believed the name was Battle Royale was because it seemed like a version of The Warriors with children.

I believe that I saw this movie sometime between 2005 and 2008. Other than the possible plot of the children being sent out into an empty city, I don't remember much more of the plot. My most vivid memory of the movie is two children under a lion statue with a torii in the background.

Most of the movie was red. It seemed like most of the buildings and objects except for the children were red.

The movie, if I'm not mistaken, was a Halloween special that aired once and then never again called Kakurenbo aka Kakurenbo: Hide & Seek.

A young boy named Hikora enters the ruins of a forbidden city with a group of other children to play "Otokoyo" (a game of hide-and-seek where the players are said to be kidnapped by ghosts and demons) to find his missing sister. - IMDb 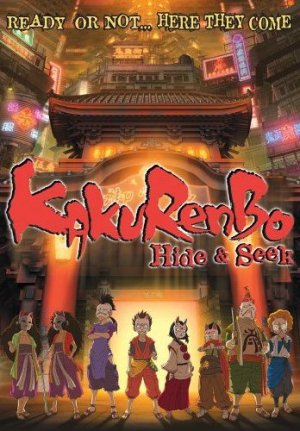 As you've also tagged this as identify-this-tv-show, I'd like to suggest that you might have watched an episode of Dennou Coil (aka Cyber Coil). It is from 2007 and features children running around in a virtual world. I can distinctly remember a scene in a temple with a torii.

a Japanese science fiction anime television series depicting a near future where semi-immersive augmented reality (AR) technology has just begun to enter the mainstream. The series takes place in the fictional city of Daikoku, a hotbed of AR development with an emerging city-wide virtual infrastructure. It follows a group of children as they use AR glasses to unravel the mysteries of the half real, half Internet city, using a variety of illegal software tools, techniques, and virtual pets to manipulate the digital landscape.

I'm not sure about the red tint. But the animation does sometimes carry an other-worldly feel to it. Here's some artwork: 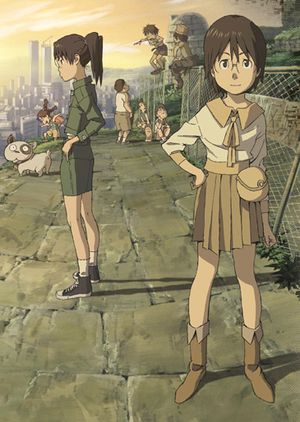