Why are geniuses often portrayed as socially awkward?

There is a Hollywood stereotype that very intelligent characters are often socially awkward and struggle to understand human interaction:

Is this stereotype based on any evidence? Why are highly intelligent characters often portrayed this way?

As all stereotypes, it's an oversimplification. Our culture is focused mainly (or almost exclusively) on the material, so the "important" traits are physical: strength, beauty, knowledge/intelligence (often wrong intertwined), money, power,... This, being still too complicated for the pop culture, is simplified further: power means money, good physical traits will give you both (at least by the end of the movie),... so, you're left with body and mind as the only two important traits (now my answer is a bit of an oversimplification, but not as much).

Another simplification is that pretty = sociable. So, those not pretty are not sociable, which is the reason why such persons become, as you rightly put it, socially awkward.

Now, if you have only two (main) traits, a person cannot have both, because (s)he would be perfect, right? Hence, smart must mean socially awkward. Tony Stark is the obvious counterexample here, but he is portrayed as an all-might human, and his flaws are just minor annoyances.

Keep in mind that your examples are more or less aiming towards comedy. Very common way to make fun of characters is to make them stupid, but you cannot make that to smart people. Hence, you make them "socially stupid", and achieve the comedy element (this is the key element of the Bones character in Bones, although most of the other - also smart - characters there are not nearly as awkward as she is, with the exception of Zack).

This kind of stereotype is also somewhat believable to "ordinary" people, since "smart" is also mysterious, in respect to what such people do. Most people do not understand advanced mathematics, programming/system administration/hacking, chemistry, etc., so people who understand this stuff must be weird, right?

For example, astronauts must also be insanely smart, but they are mostly seen as good looking guys (rarely women) who fly in rockets and walk on alien planets and moons. Or snipers, who just put a cross on someone and shoot him (in reality, it's a job that requires quite a bit of smarts; see a nice, short explanation in this Cracked article). These types are never portrayed as socially awkward, are they?

As for how strongly this is based on the real life, I'd say not at all. Sure, there are very smart people who are also socially awkward, but there are much more of them who are just as normal as the next man. On the other hand, there are loads of people who are of an average intelligence, but are for some reason socially awkward. A typical example: obsessive fans/collectors, i.e., StarWars fans, Trekkies, Tolkien fans,... some of them are certainly very smart, but you can be one without having beyond-average intelligence (I hope this doesn't get my rep in negative :-)).

To sum it up: social awkwardness is related to the interaction and share of one's interests with the "ordinary" people (read: with the majority), and is not, at least directly, related to one's intelligence, but it's an easy way for the pop culture a) to achieve comedy, and b) to emphasize smartness of a person doing something that common people have hard time understanding.

IMO, this is neither a stereotype particular to Hollywood nor one peculiar to the movies (although both might have perpetuated it). It's a general stereotype from our society.

The reason why the mentally gifted are often eccentric or do not possess adequate social skills is out of the scope of this answer. That said, writing characters with eccentricities is a common enough trope used to provide a little more dimension to them. For example, most detectives (Poirot, Holmes, Monk, Rorschach) have peculiarities that allow them to stand out from the rest of their ilk. These peculiarities often render them social awkward or inept.

That said, there are plenty of examples of characters in the movies who are gifted and function perfectly well in their societies. Sticking to the superhero theme, we have Reed Richards and even Superman. Characters such as those in CSI or perhaps Dexter himself (at least on the surface) probably also fit the bill.

P.S. The following is rather apropos: 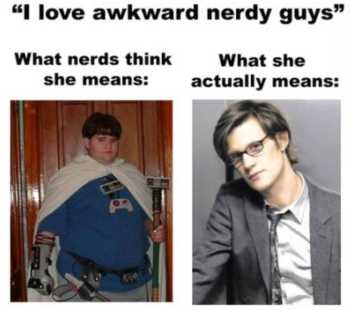 I wouldn't call characters in your list socially awkward (may be with an exception a Dr. Cooper). They have their own demons, but it is the main point about them - otherwise they won't be interesting, and building an interesting character is an ultimate goal (or at least one of two - the other being a story) for a writer.

Now back to the question in the title. I think that social awkwardness of some characters in movies stems from an 'obvious' correlation between being a genius and being a geek, and then immediately another far one: being a geek and being socially awkward. Why is that? Well, first of all because it has some reason behind it, especially when perceived by a jock. Then, there is always one of two. The character either overcomes whatever his social awkwardness stops him from overcoming, or is a background-ish science type, whose role in movie boils down to 'being smart'. In a latter example, of course, it is really easy to make a socially awkward character to communicate his levels of intellect to the viewer (as you were right that it is a stereotype).

I think other examples usually feature characters that are far more interesting, than just being labeled as socially awkward.

Now a quick comment on people from your list. Sherlock, who is indeed crass sometimes, isn't socially awkward, he's just crass (and a bit cynical). Tony Stark is everything that social awkwardness is not. He's billioner, philantropist... you know the drill. Morgan is a sociopath, and they are far from being socially awkward either. As for Banner - bingo. But as he sometimes wakes up in desert with clothes torn apart, without clue of what happened and generally thinks little of himself. He is a definition of social awkwardness (at least in marvel universe), but it serves purpose - how would he otherwise turn into a green moster, without always feeling nervous?

To recap. It's either for a purpose, or just a lazy way out for a writer.

Isaac Asimov, in an autobiographical essay, related his work on a TV show. The hero was a genius, and the creative consultant said that he had to be inferior in social situations or the audience would dispise the character. The hero can't be superior in all ways, but has to be handicapped as well.

7
Why is Kenny G portrayed as a homosexual in southpark in the last episode of season 3?
13
Why are the Na'vi in Avatar blue in color?
1
Why are there two Phils?
6
Why doesn't Ash swap out Pokémon more often?
5
Why is Eve portrayed as manipulative and outright rude?
22
Why is Skinner so awkward in Hot Fuzz?
8
Why are they calling him Jaskier?