Do the pub names and their order mean anything?

Seeing as to how the final pub, The World's End, is more or less when the world ends, do the other pub names also signify something? What are their names and their positions in the Golden Mile crawl?

(I believe that they do mean something. Gary meets Oliver's sister in The Old Familiar.)

As you know, the Cornetto trilogy is pretty big on foreshadowing.

A fine movie student (posting as guest) got an interesting answer in edgarwrighthere.com (first comment). 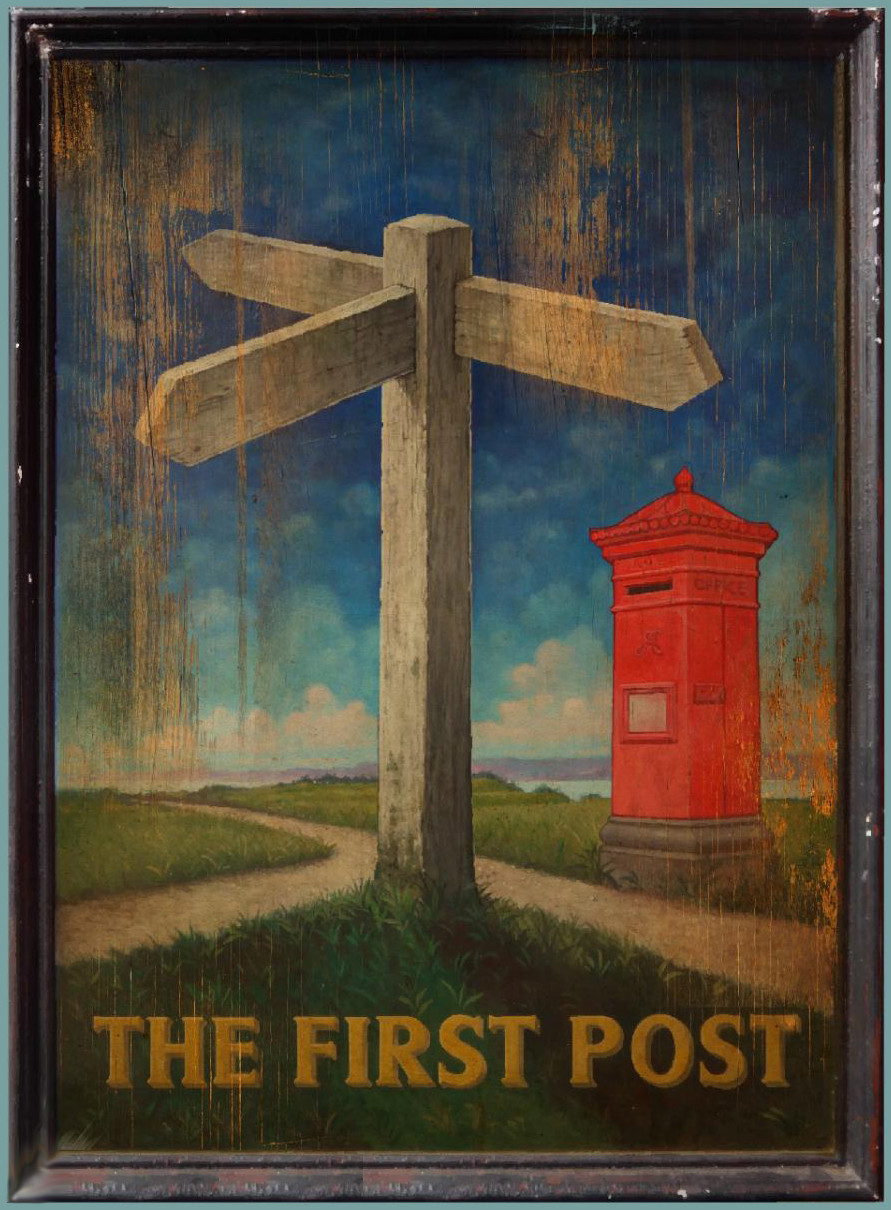 This pub should be self explanatory, it is the beginning of the adventure Gary King (Simon Pegg) and his mates are about to take. The sign, itself, adds some depth as one could say that they have come to a crossroads with this journey; both paths will eventually lead to the prize (completion of the Golden Mile) but the routes will be different. To some it may be difficult, and others easy. It's safe to say that it was pretty difficult for Gary and Co. 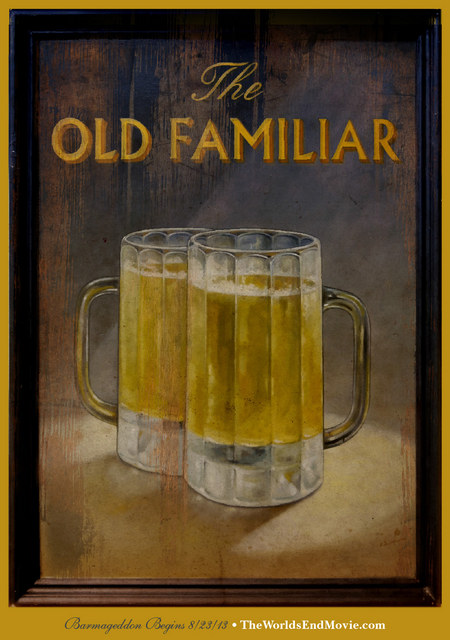 This pub is where Oliver's (Martin Freeman) sister Sam (Rosamund Pike) shows up. Both Gary and Steven (Paddy Considine) had a thing for Sam as the group recalls and Gary even tries to become "familiar" with her once again in the same pub it happened 20 years earlier.

Besides the pub is a replica of the first pub. Note that it ties to the movie main theme: which is things repeating again and again(the reasons varying from nostalgia, arrested development, or clones). And it also describes the benefit of pubs : pubs feel safe because they are fundamentally all the same (a bar, taps, tables, beer) 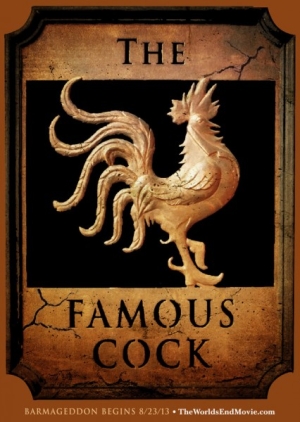 Gary King and Co. were not allowed to drink in this bar because of the events that took place 20 years ago. Gary is trying to seem more important (cock of the walk) in this city even though no one remembers him. In a sense though he is famous because he is banned from the bar.

There is a delicious sense of irony there: King wanted desperately to be remembered by his old town. The only time he is, he's barred from a bar. So his wish to be famous denies another wish of his: his bar-athon. Another hint at King's current deadlock. 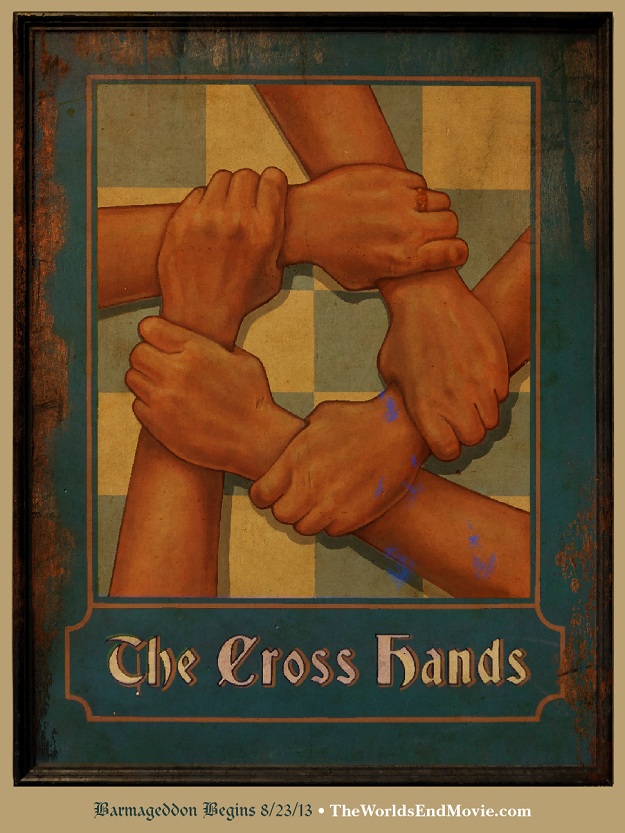 Gary and Co. go into this pub, have a few drinks and Co. (Peter, Oliver, Steven, and Andy) try to set Gary straight. This pub is where a lot of deep emotions come to the surface and everyone suddenly wants to become violent (Peter when seeing his old high school bully, Andy when he finds out Gary lied, and the whole fight scene in the bathroom).

As noted by @Nobby, the background of the sign is a callback to the bathroom tiles where the infamous fight took place. 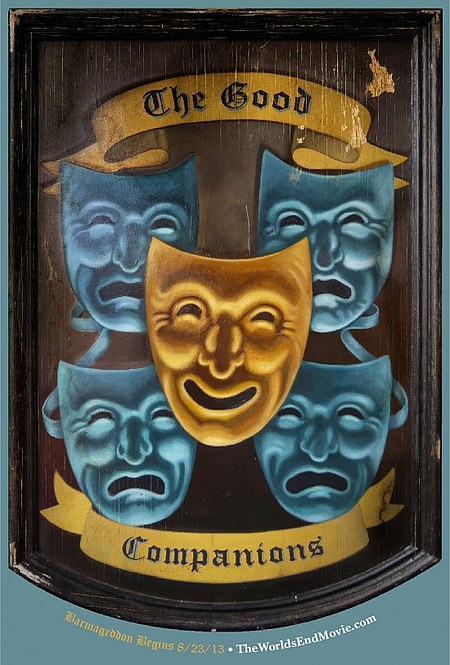 Gary and Co. continue to do the pub crawl but as the sign shows, only one (the King himself) is actually having a good time while the others only want to continue to save themselves from the robots. 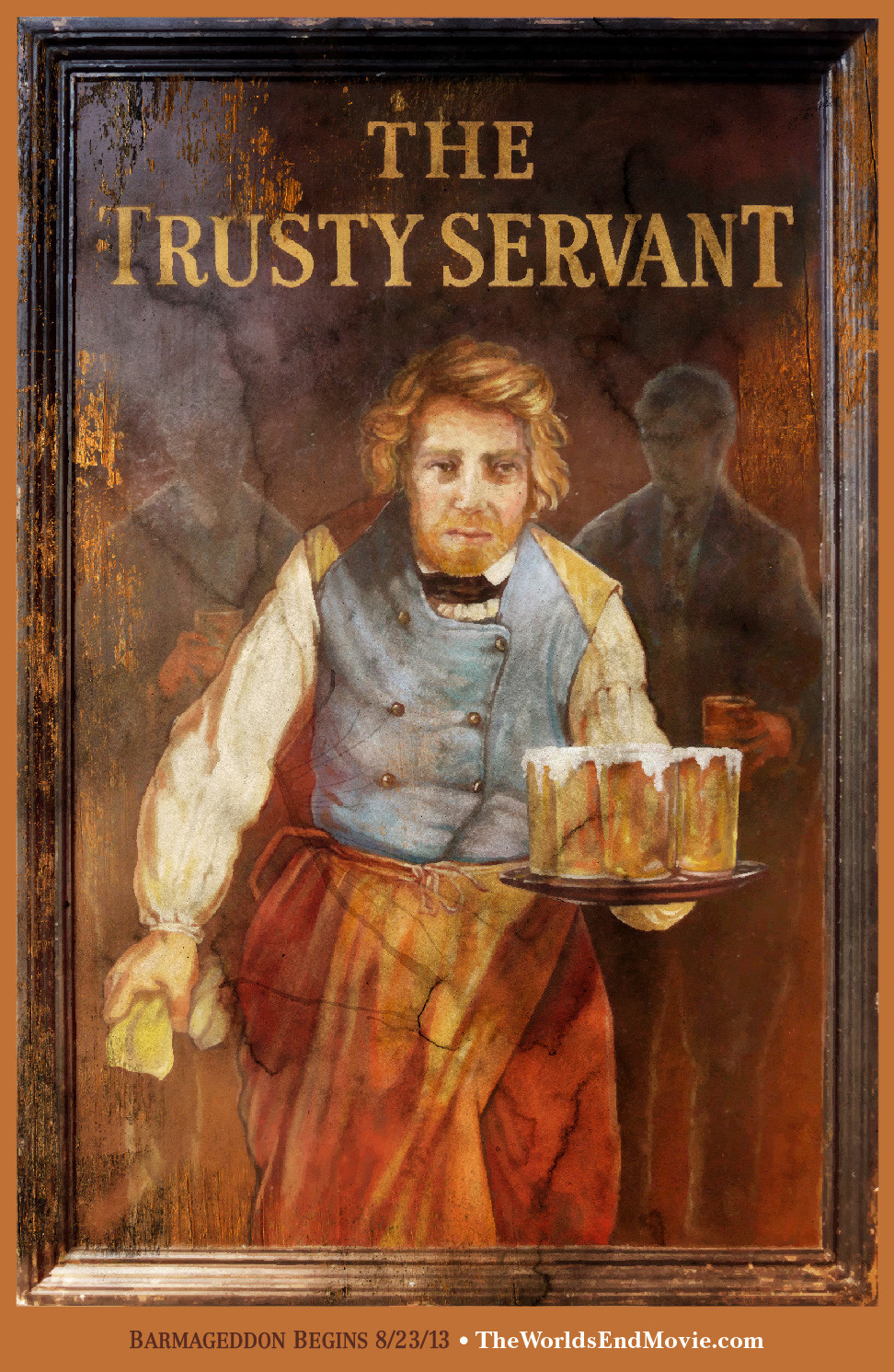 Now, are they really robots? Anyways, we're getting off topic. In this pub we see Tyres, I mean Reverend Green and two others warning Gary and Co. about the danger that is around them. When Reverend Green says too much, he willingly (but not joyfully, hence the sadness of the trusty servant) obeys the order of the mysterious beings (as he must) and disappears. (Also note that this is the time O-man becomes a servant) 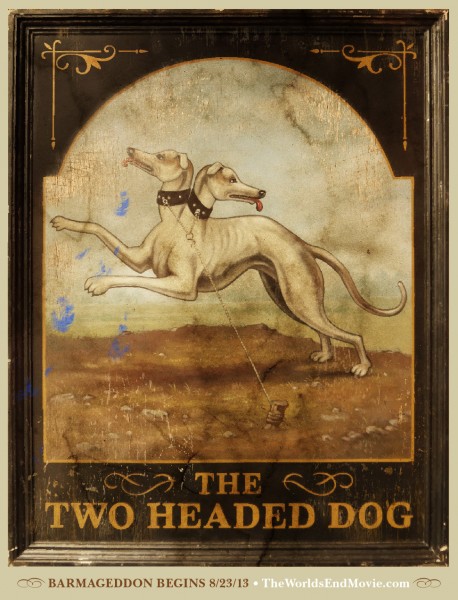 Now, in this pub Gary and Co. realize that people are acting strange (specifically MARK HEAP!!) Using Mark Heap as the bartender may be a joke directed at Spaced fans as Brian was never super happy and smiling but all of a sudden its his job! We also see the twins change and everyone suddenly becomes part supportive of the mission to complete the Golden Mile but also try to kill Gary and Co. as well. (Note: In the sign there is a dog with two heads, one normal, the other with ink on it. This could represent the aliens. They look like us, but that does not mean they are) 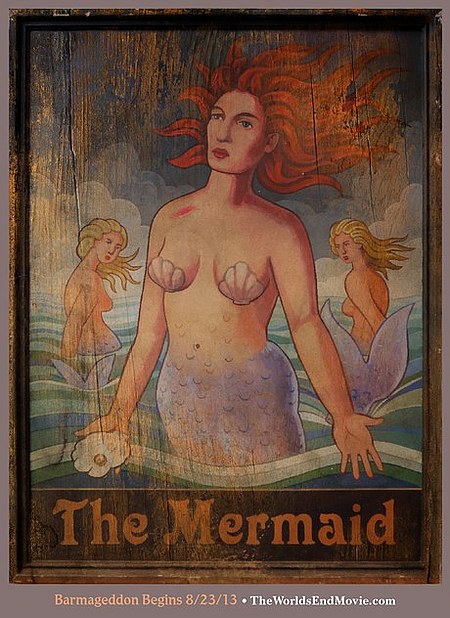 Now this may be a long shot but it makes sense to me, hopefully Edgar will agree. I believe this pub is called the Mermaid because of the Marmalade Sandwich and their similarities to Odysseus and the Sirens. Sirens are often compared to Mermaids. The Sirens enchanting voices (sex appeal, in the World's End) would lure soon-to-be-shipwrecked sailors for their own benefit (to get their DNA). In this case, Steven/Sam was Odysseus and saved their mates from the Sirens. The sign is also a Marmalade Mermaid Sandwich. 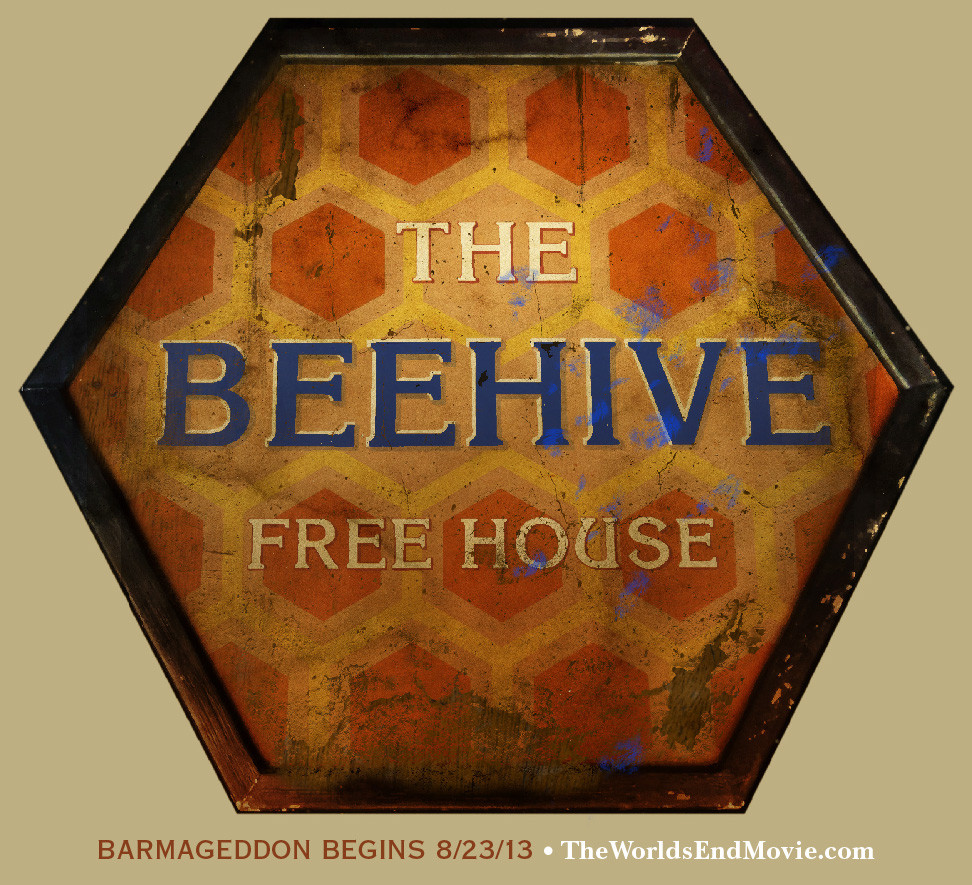 Guy Shepherd (1995-2002 James Bond) explains to Gary and Co. the goal of the invasion, how they are all like a Beehive; working together to create something magnificent. The group understands that when they say they're not willing to join, they may get stung (they get into a huge brawl).

Note the presence of the blue paint, ominous sign of the presence the network. As seen before in th two headed dogs 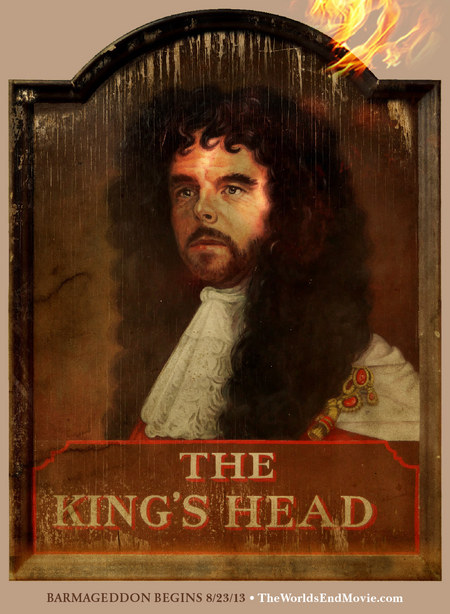 Gary KING goes insane and despite the danger wants to finish the Golden Mile. It's safe to say he is running around like a Cock with its Head cut off.

And he knocks his head against a post - many times - to prove he's human.

As noted by @Nobby, the portrait has a striking resemblance to Gary King's head

Eleven. The Hole in the Wall 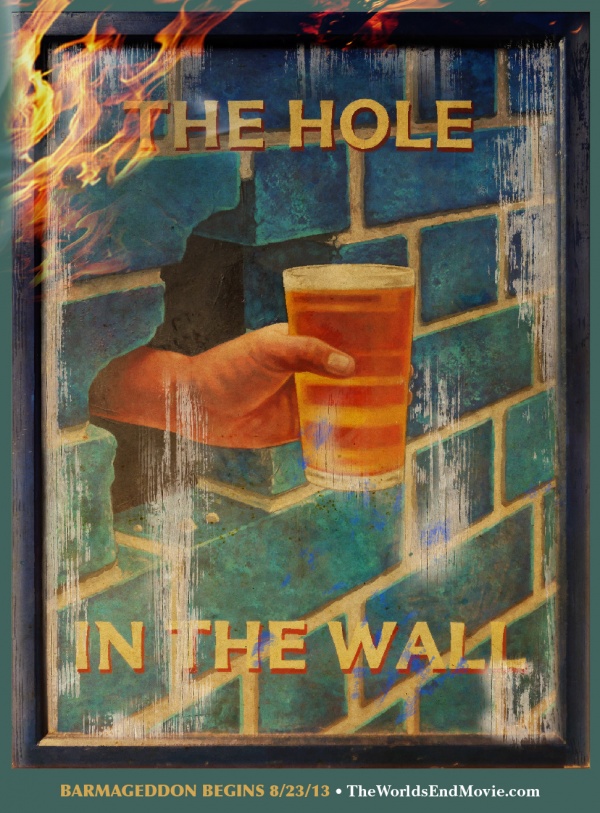 Any crashes the car through the pub, thus, making a hole in the wall.

Do you think the color blue used for the bricks is just random chance? 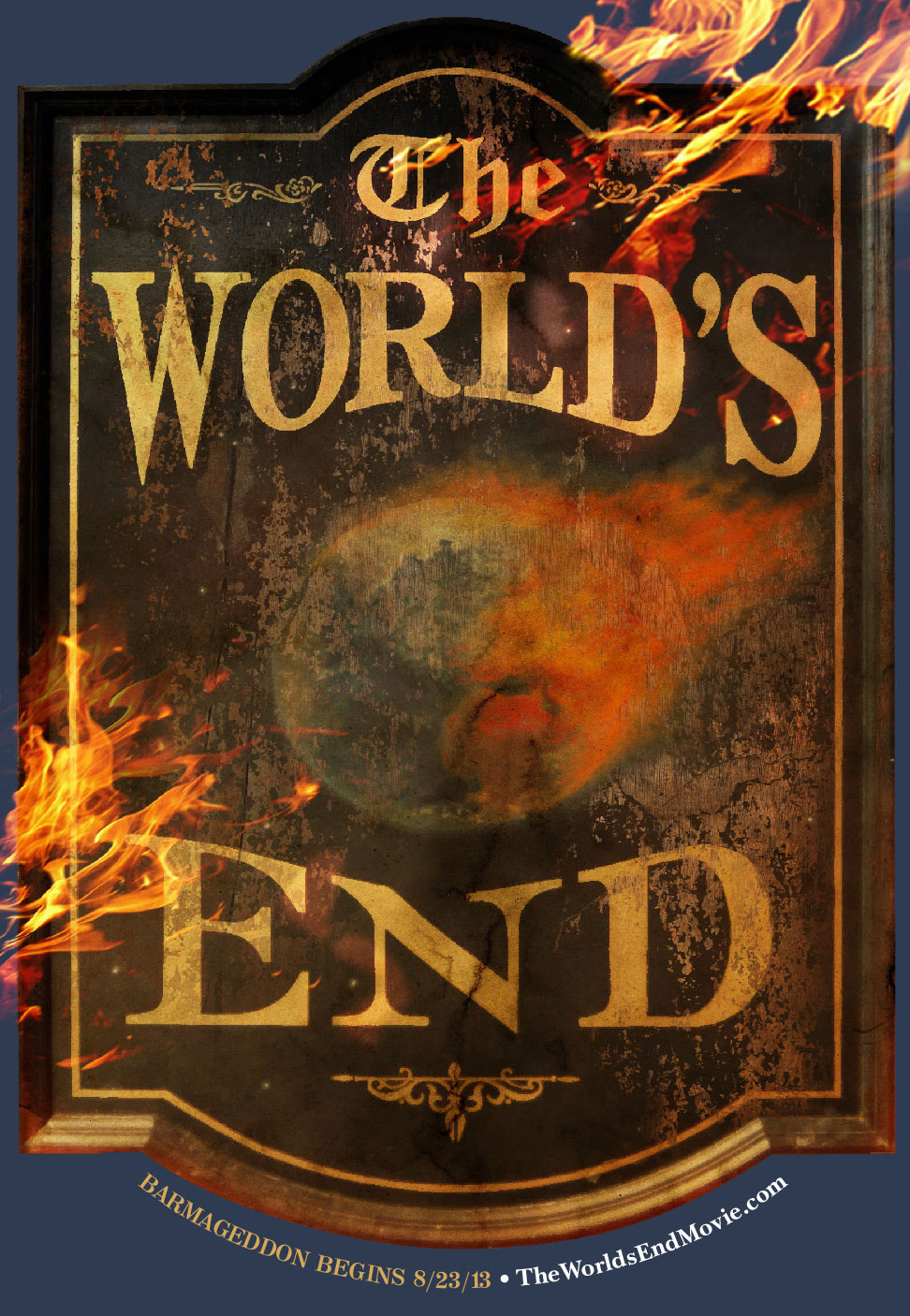 The world ends; fire spreading across the globe as in the sign. This makes way for a new dawn, and a new tale.

Not the answer you're looking for? Browse other questions tagged analysis the-worlds-end .

32
Do the words 'Billy don't be a hero' mean anything to you?
6
Is this the grave of a child in Akira Kurosawa's Dreams?
11
Significance of the many unusual names?
15
Was Edge of Tomorrow deliberately released around D-Day?
1
Why does Andy drink the shots in the “Cross Hands” pub?
2
At what point does friendship become "queerbait"?
3
What is the significance in the allegory of the Divergent series?
7
Is the movie "Killing of a Sacred Deer", a metaphor or allegory?
7
How do Phineas and Ferb fund their projects?
4
What does "And that’s the gambit!" mean?