What is the meaning of Rorschach's mask and name?

In Watchmen, Rorschach wears a mask that shows continuously changing symmetrical patterns of black "ink" on white cloth, resembling those of, well, a Rorschach test. In fact, in some scenes he is very anxious about his mask, calls it his "face" and cannot stand a second without it (probably because Walter Kovacs's real identity "died" long ago).

But while I understand what a Rorschach test is, I'm not sure how its motives relate to the character of Rorschach. Why does he wear that mask and name?

I think it's safe to say that it represents different things to different characters, and that Alan Moore wants you to judge for yourself the meaning behind Rorschach's face.

But I certainly have my opinion. Because the movie is "based on the comic" we can look to the comic for clues. IMHO, this is a question that is answered in the comic book, but not addressed in the movie.

The short answer is that the mask represents "the abyss" (that created Rorschach) staring back at humanity. Chapter VI The Abyss Gazes Also deals with the origin of Rorschach.

Alan Moore continuously describes Rorschach as being above the filth he is looking down at. From Rorschach's journal:

He's looking down at the abyss, and the abyss is looking back. I would make the case that the abyss is what turns Kovacs into Rorschach, and so the mask represents humanity's evils coming back to judge itself. 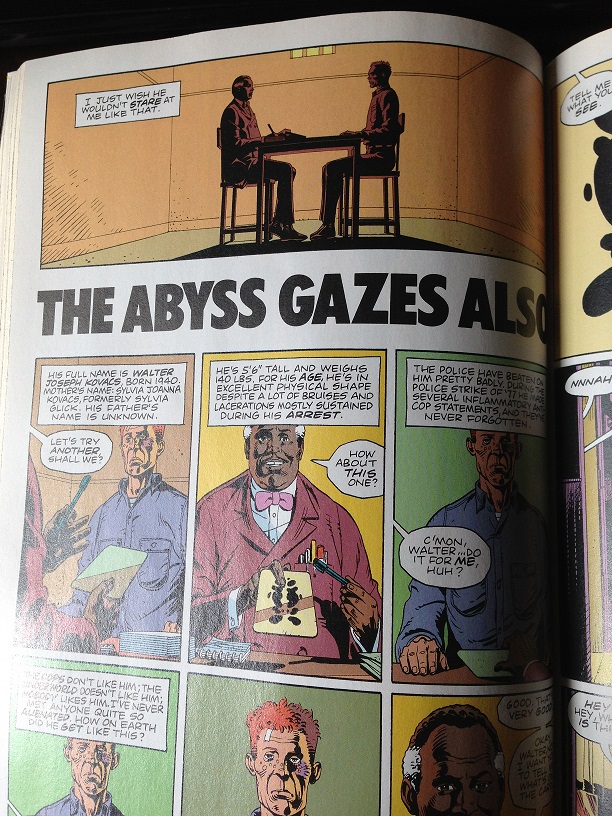 In this chapter we see Kovacs being given a Rorschach test, and see the inner working of his thought process.

As the chapter progresses, we see there is an ever changing symmetry in the traumas as Walter Kovacs remembers them. This is the genesis for the name Rorschach. 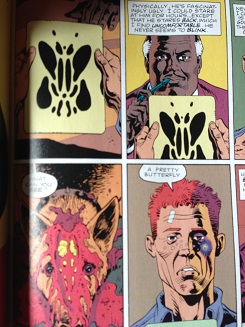 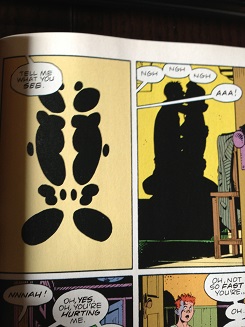 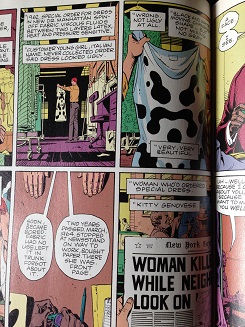 To Kovacs the mask is Rorschach's face. 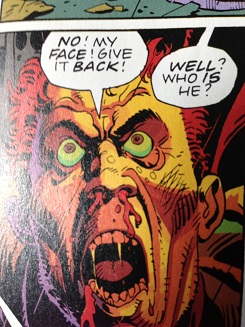 To Rorschach, it's the (symmetrical) horrors of the world that are coming back to judge evil doers. What he calls his freedom "to scrawl own design on this morally blank world." This is the reason the patterns are ever changing. The design changes with "heat & pressure". Heat & pressure being metaphor for the oppressive elements of day to day life. 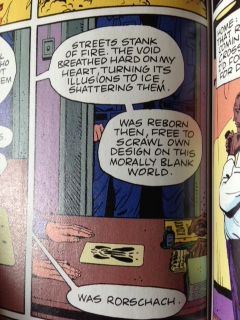 But to his doctor it represents something different. The horror of meaningless blackness. 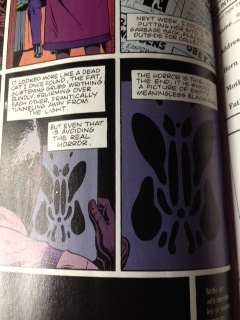 The Rorschach test relies on the interpretation of ambiguous images to judge personality and even potentially identify things like homosexuality, schizophrenia, etc. The ever-changing mask represents how Rorschach interprets both society and himself. When Kovacs wears the mask and becomes Rorschach, he becomes the interpreter rather than the interpretee.

Two years afterward, in March of 1964, he bought a newspaper and saw 'her' on the front page. He read the name Kitty Genovese and decided that she was the one that ordered the dress, "I'm sure that was the woman's name." Kitty Genovese, in both the Watchmen reality and our world had been raped and tortured outside of her apartment building while her neighbors just watched, not calling the police. Because of this Kovacs learned what people were behind all the evasions and self-deception. Being ashamed for humanity, he took the remains of her unwanted dress and made a face he claimed that he "...could bear to look at in the mirror."

He is also filled with self-loathing, which is unsurprising, considering his childhood. Part of it stems from the fact that he has always been ostracised and, in many ways, wants to fit into society and gain some semblance of acceptance. Yet, he also sees society for the apathetic mess that it is, having borne the brunt of it himself.

The Question was used as the prototype for creating Rorschach, while Mr. A, being a far more radical right-wing character than the mainstream-suited Question, served as the main inspiration for Rorschach's right-wing views as well as his black and white morality.

When buying a newspaper on his way to work in March 1964, Walter read about the rape and murder of Kitty Genovese, whom he believed was the Italian woman who had rejected the dress. Ashamed by what he read about the unresponsiveness of her neighbors, Kovacs became disillusioned with the underlying apathy that he saw as inherent in most people. Inspired by Genovese's fate, Kovacs returned home, made "a face [he] could bear to look at in the mirror" from the dress's fabric, and began fighting crime as the vigilante Rorschach. Initially, Kovacs left criminals alive, but bloodied, for the police to arrest.

Not the answer you're looking for? Browse other questions tagged analysis character watchmen .

16
Why does Rorschach speak with such a growly voice?