What was Oldman spinning around in?

In The Best Offer, Virgil Oldman is finally shown tied to a device and spinning around. This is presumably occurring in the loony-bin. What is this device? Does this event actually occur or does it represent Oldman unravelling, trying to figure out how he was duped and unable to come to terms with what has happened to him?

This is a Space Curl device, originally developed as a physical therapy device (under the name "Aerotrim") and later used by various space agencies as a training aid for astronauts. 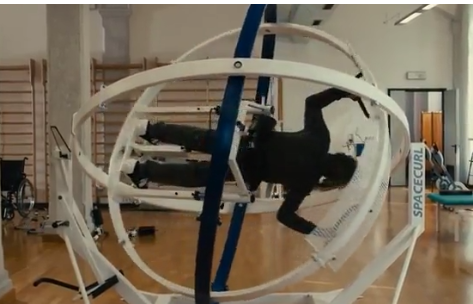 As you can see from the linked (translated German) wikipedia article, it has some effectiveness in the treatment of various neurological conditions affecting the spine, posture and where the patient shows signs of disorientation:

In medicine, the Spacecurl is a therapy device for training the spinal column or for the treatment of neurological disorders (such as Parkinson's disease). By moving in the muscles, these should be strengthened and the body awareness and coordination improved or restored.

That being said, within the film it's not entirely clear why someone with his symptoms would be using such a device. Presumably. having seen it in the gym, he just thought it might be interesting.

Not the answer you're looking for? Browse other questions tagged the-best-offer .

6
What is the sequence of events during the denouement?
6
What does the automaton symbolise?
4
What were the numbers shouted by the dwarf woman?
2
Where did all the furniture that was in the villa come from?