The men in top hats were an anachronistic version of ATLAS and P-body from Portal 2, one being tall and skinny, the other short and plump. The two men were definitely something out of the late 19th, early 20th century.

Oh, there was no speaking in the movie, to my recollection, so it was kind of like a very colorful, silent movie.

The animation was very similar to Foster's Home for Imaginary Friends, but it was crisper, very detailed, except somewhat steampunk. Basically, the art style is very hallucinogenic. If I were to estimate when I watched it, I would guess around 2000.

Your description reminded me of The Perils of Penelope Pitstop, by Hanna Barbera. Not sure though, as there were more than two men with hats, but have a look here.

(Funny, because I was thinking of this cartoon just the other day...)

Could it be "Sherlock Holmes in the 22nd Century". See if this pic rings a bell: 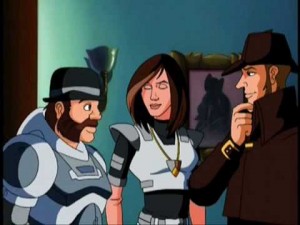 I think you were looking for Laurel and Hardy (animated series), It was a cartoon based on Stan Laurel and Oliver Hardy's comedic acts by the animation studio Hanna-Barbera from Hal Roach.

PS: Sorry, probably not the one since this one is old.