How would the WOPR super computer ("Joshua") in War Games compare with modern computers?

Is there any documentation of the specs (processor speed, memory, etc...) for the WOPR super computer in the 1983 film War Games?

I was watching the movie tonight and I was curious as to how "Joshua" compared to modern computers.

If you take into account Moore's Law (which basically states computer output doubles every 18 months), you could extrapolate that today a computer should be 1,048,576 times more powerful today than it would have been then (June 1983 release date), as there have been 20 of these 18 month periods since then (approximately). This graph would tend to bear this theory out: 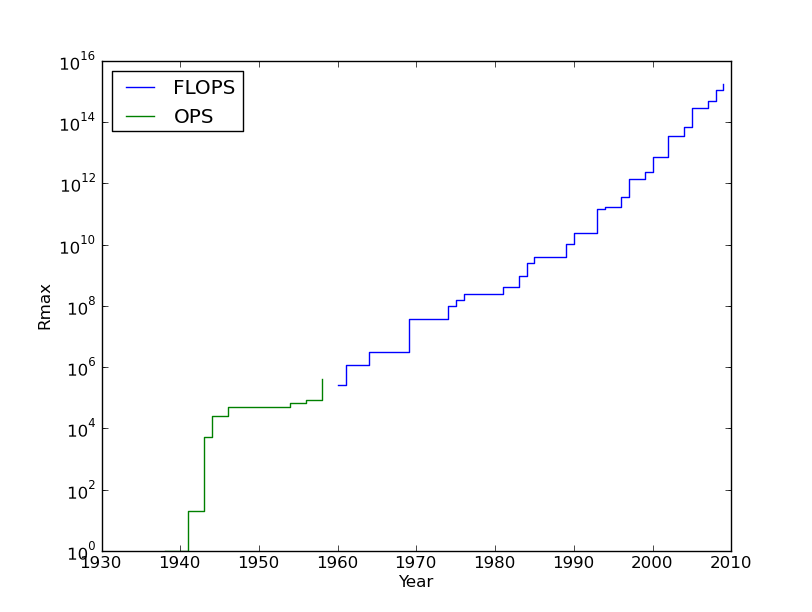 This image depicts the number of FLOPS (FLoating Point Operations Per Second) by year. In 1983 it appears we were around 10^7 FLOPS while today we should be somewhere around 10^18 FLOPS. In fact, the fastest computer currently is the Tianhe-2 which is based out of China. It can perform at 33.86 petaflops (a petaflop is the 10^18 I mentioned earlier), so it is a bit faster than what the graph indicates, but hopefully you get the picture.

I don't know how powerful the WOPR was actually supposed to be, as I don't see anything mentioned. Part of this may be it was supposed to be one of, if not the most powerful computer on the planet at the time. If so, my analysis should hold true. Mind you, the numbers we are talking about are mind boggling from a 1983 standpoint ... getting to where we are at today might leave you with a large gaping hole in your cerebral cortex.

Well, the only real mention of WOPR/Joshua's capabilities come from the sequel, WarGames:The Dead Code. Once he and the main kid character come across the mothballed/in hiding WOPR, Dr. Falken mentions, "In his day he was MILES ahead of the curve".

Given that Joshua manages to hold his own with his 21st century replacement, R.I.P.L.E.Y., even after the WOPR mainframe was destroyed and Falken uploaded Joshua into RIPLEY, I'd say the good doctor's statement still held true.

You might compare the power of the WOPR back in 1983, to a modern day calculator at best!

13
Why did WOPR switch sides?