In "Citizen Kane" does Bernstein purposely take a tumble into the newspaper office?

The "Citizen Kane" scene that shows Kane's first day at the newspaper includes a moment where Kane's assistant Bernstein enters the action by tumbling loudly into the room amid a collapsing pile of supplies. After taking his fall, Bernstein looks up at everyone and says "Oops." 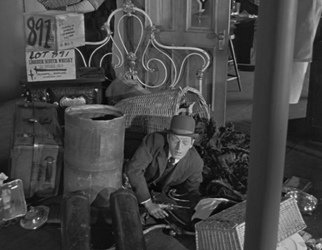 On the surface, it seems like Bernstein just happened to trip on his way into the room. But virtually every detail in "Citizen Kane" seems to have meaning. And Bernstein's tumble happens in the opening minutes of Kane's dramatic arrival at the office, other elements of which unfold as if they were carefully planned by Kane and Bernstein.

Was Bernstein's tumble into the scene a true moment of clumsiness? Or was it part of some act, perhaps one he and Kane had arranged to help Kane seize control of the newspaper?

There is a terrific crash at the doorway. They all turn to see Bernstein sprawled at the entrance. A roll of bedding, a suitcase, and two framed pictures were too much for him.

The commotion happens just after Kane states that "I don't know my plans myself...As a matter of fact, I haven't got any. Except to get out a newspaper." Perhaps the crash at the doorway is indicative of the haphazard approach Kane intends to take - an approach that includes doing too much at once, and perhaps not always with grace. The crash is a visible and audible symbol of change coming. In the immediate conversation that follows, Kane introduces Bernstein as his general manager and announces that the paper is now a 24-hour enterprise.

I don't think the spill is an indictment of Bernstein's competence, though, as moments later we discover Bernstein has already ordered 6 phones for the office and instructs Carter to get a discount, after which "Kane looks at Leland with a fond nod of his head at Bernstein."

I've looked at three different versions of the script, and only one included Bernstein's "Oops!" - this may have been an adlib that is recorded in later versions but not originally intended.

I can't think of any reason why, or even how, Kane and Bernstein would use an intentional fall as a way of helping to seize control of the newspaper.

If you're looking for some meaning of that moment, to me it accentuates the relationship between the three characters of Kane, Leland, and Bernstein. When the trio arrive at the newspaper, Kane and Leland are riding in the front of the stagecoach-thing (?) while Bernstein is on the carriage behind them, sitting on top of the furniture that he later trips up with. Kane and Leland head inside together to confront the newspaper editor while Bernstein is tasked with bringing in all the gear from the carriage.

This puts Kane and Leland on an equal level, especially when the editor shakes Leland's hand first, mistaking him for Kane. Jed Leland is a strong character and one of a few who can stand up to Kane as the latter loses his way. On the other side of the coin, Bernstein is like a lap dog to Kane. Unwaveringly loyal but also always in his shadow. So while Kane and Leland make a dignified entrance to their new newspaper as powerfully idealistic young men, Bernstein--a follower--is less than graceful in his entrance.

I also think it's a little bit of slapstick. Shortly afterwards this is expanded as Kane and the editor are arguing in the doorway of the office while Leland and Bernstein push past the flustered editor. Kane is assertively taking over in more ways than one. He is also an avid hoarder; the amount of belongings he brings in and the way he uses them to assert himself in the newspaper is emphasised comically in these scenes.

Not the answer you're looking for? Browse other questions tagged plot-explanation citizen-kane .

18
What is so good and unique about Citizen Kane?
6
Where does Limbo take place?
4
How does husband fit into the story?
4
Did Walt really take Tuco by fear when blew up his office?
5
Why does Payne take Annie hostage?
20
Did Rowan Atkinson's character purposely distract the check-in agent?
15
What's with the "cockatoo jump scare" in Citizen Kane?
5
How does Eames get access to Fischer's office?
0
Was the Heart Donor purposely killed?