Why didn't Tony Stark summon his other suits earlier?

In Iron Man 3, when the Mark 42 (a prototype) takes an unconscious Tony Stark to Tennessee. There he tries to repair the suit, but fails. And must take a car back to California, Miami and make some gadgets on his own. He is caught and summons a recharged Mark 42 to the location. He also saves several people from Air Force One in the same suit. Later when he goes to confront the Mandarin at the dockyard, he calls on his suits after he (and Rhodes) are outnumbered by the Extremis solders. Why doesn't he call on his suits earlier right when the Mark 42 was damaged or at other times when he needed them the most?

The key part is "wreckage of his house".

All the suits were in the vault, which were underneath his house. After Mandarin's attack, the vault was buried in rubble. After the attack, the rubble from the attack was cleaned up. By the end of the film, that had progressed far enough that the vault's doors were accessible again (we get a glimpse of this once Tony authorizes House Party, as it shows the workers clearing rubble as the vault doors open).

Answer taken from Sci-fi - Why didn't Tony Stark initiate the House Party Protocol earlier? by @Keen as suggested by Doorknob.

To provide actual evidence, earlier in the film, first there is the voicemail that Tony leaves for Pepper:

[Back at Tony's house, which is now surrounded by emergency rescue and news reporters, Pepper stands alone and looks at one of Tony's shattered Iron Man helmets, she notices a red flashing light inside the helmet and as she puts the helmet on she receives the message Tony had left her earlier] 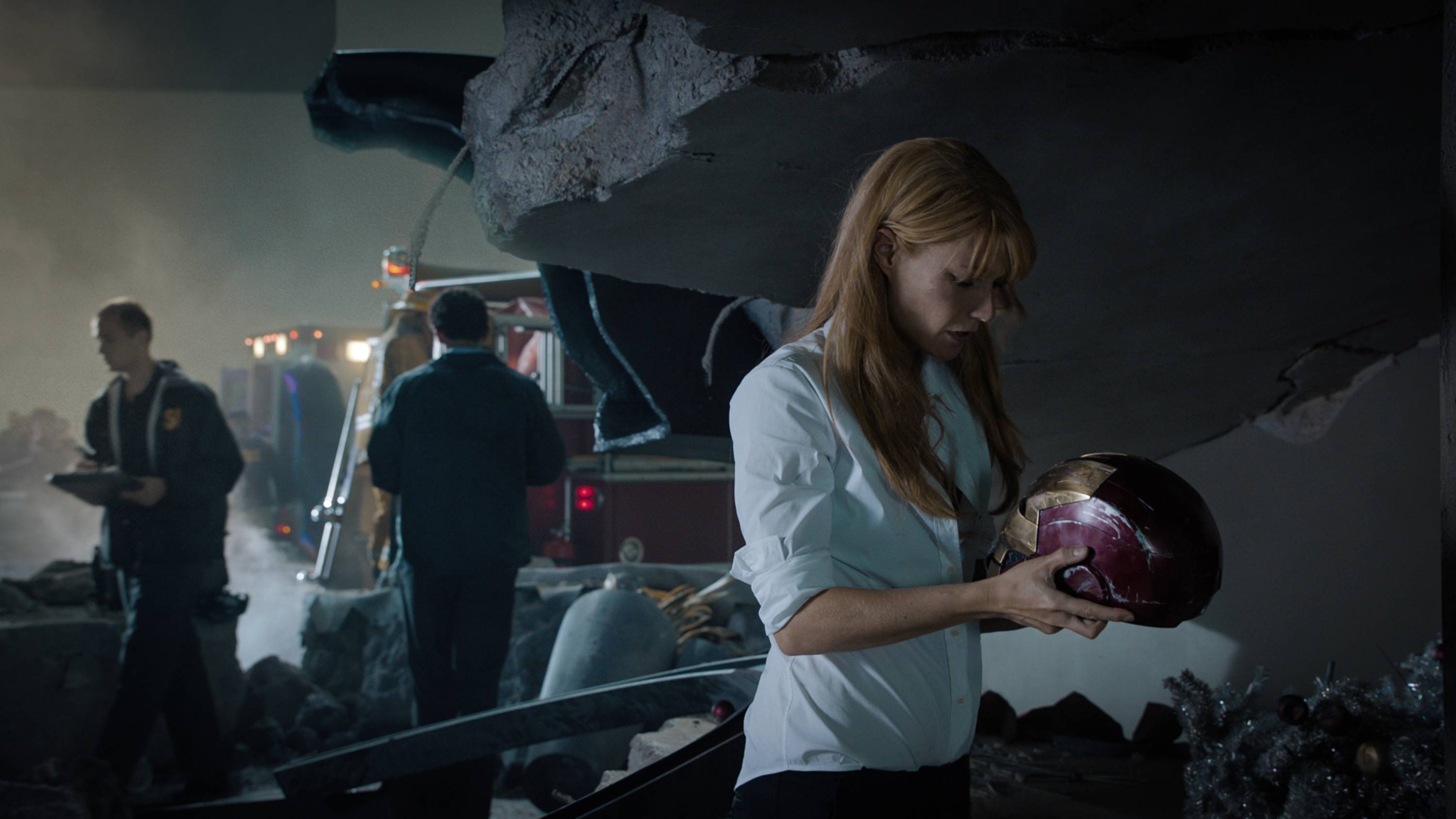 when Tony and Rhodes are trying to figure out what to do:

Rhodes: We gotta make a decision. We can either save the President or Pepper. We can't do both.
Jarvis: Sir, I have an update from Malibu. The cranes have finally arrived and the cellar doors are being cleared as we speak.
Stark: And what about the suit I'm wearing?
Jarvis: The armor is now at ninety-two percent. [Tony takes out the leads attached to the suit]
Stark: That's gonna have to do.

He procedes to use that suit to save the President remotely.

Then at the actual House Party protocol scene:

Stark: Yeah, but I missed the President.
Rhodes: You couldn't save the President with the suit, how are we gonna save Pepper with nothing?
Stark: Uh...say, Jarvis, is it that time?
Jarvis: The 'house party' protocol, sir?
Stark: Correct. [at Tony's house, as men are cleaning up the rubble created by the damage to Tony's house, we see the ground beneath Tony's house open up revealing a secret underground]

We can clearly see that there was huge pieces of rubble and parts of the building on top of the tunnel.

A second later we see that the tunnel is long. Had the entrance been open while still buried, it would have collapsed into the tunnel. Had the Iron Man Suits tried to blow their way through the entrance or the side walls, there would be a cave in/collapse of rubble. And had the Iron Man suits used the explosives to try to get out, the strength of the explosion needed would have damaged the suits as well.

In short, Tony had to wait until the wrecking crews cleared enough away before he could access the rest.

He actually calls them hours before the showdown at the shipyard, the delay was Travel Time, Cali to Florida.

It's also not about Jarvis having issues, as only the Jarvis copy in the Prototype suit had issues due to damage/power loss. A different copy of Jarvis has standing orders to have the cellar cleared first, for this very reason. Access to the suits is priority one for Tony.

Not the answer you're looking for? Browse other questions tagged plot-explanation marvel-cinematic-universe iron-man-3 .