In the season 3's "Thank You" Finn & Jake beat up the Ice King, and nearly at the end of the episode when the Ice King is restrained Jake takes his crown and wears it: 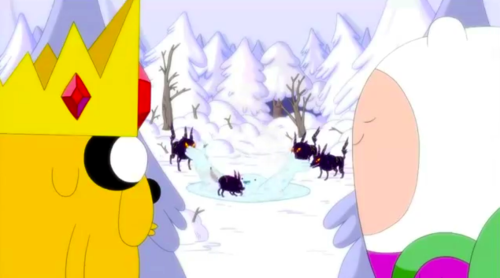 It's been said and shown in other episodes that the crown has certain "efects" on whoever wears it. That's what made the human Simon Petrikov into the Ice King after all, the same goes for Farmworld Finn.

How come that has no effect on Jake? Is he maybe immune to the crown's powers because he's a magic dog?

Jake has been seen wearing the Ice King's crown in the episode "Thank You," though it had no effect. This is because Jake is already magic, according to Adam Muto.

However, in the episode "Holly Jolly Secrets Part I," Gunter is seen wearing the crown and is also unaffected by its powers.

I have two theories on this: The first is that the crown can only have one host at at time. So Jake can put on the crown and use its ice powers, but the crown is still connected to the Ice King and can't take over another mind at the same time. This would explain why it works on Finn in the episodes Finn the Human and Jake the Dog. Simon is dead, so the crown is able to take a new host. My second theory is that the crown only has mind-altering effects on humans, which would still explain why it's only happened to Finn and Simon. (I know this post is like 6 months old I'm sorry I just couldn't resist answering.)

This could have been an oversight over the course of the shows production or: Potential spoilers ahead:

I noticed that it doesn't work on shape-shifters. When penguin Gunter wears it he doesn't change because he is actually Orgalorg. Jake is not only a magic shape-shifting dog, but it is later revealed that he is really the hybrid spawn of an interdimensional shape-shifting creature. Everyone else who has worn it, human or ortherwise, turned into a megalomaniacal ice wizard.

Not the answer you're looking for? Browse other questions tagged plot-explanation adventure-time .

1
Why are humans considered a delicacy in the Land of Ooo?
10
Why does Jake from Adventure Time have inverted eyes?
14
Why leave King's Landing now?
3
Why does the drink affect him?
1
Why doesn't the spider venom affect Peter badly?
2
Who is the Ice King, really?
8
Why did the Crown allow giving Highgarden to Bronn?
6
Why was the DeLorean covered by ice?
0
Why did Jake apologize in this scene?
2
Why did Sam want Jake to witness the act?