How is a Targaryen immune to molten metal?

In the scene in Game of Thrones S01E06 where Khal Drogo pours molten gold over Viserys's head and he dies, Daenerys says that a real (dragon) Targaryen could never have been killed by that. 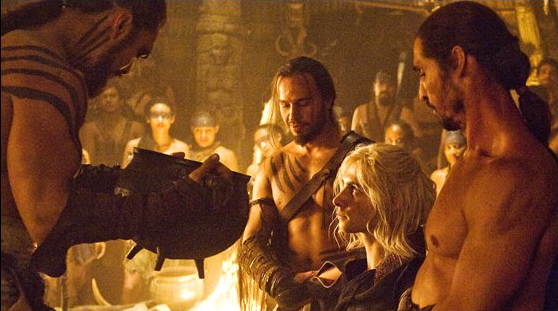 While we know that dragon blooded Targaryens are immune to fire, how does that translate to being immune to a pot full of molten gold? The Molten metal might have anyways killed any person on whom it was poured over.

The Targaryens are not immune to fire, heat or molten metal. According to George R.R. Martin (the author of the books, if anyone was in doubt) the birth of the dragons was a special magical event.

Here are a few sources:

(Snippet from an interview)

George_RR_Martin: Granny, thanks for asking that. It gives me a chance to clear up a common misconception. TARGARYENS ARE NOT IMMUNE TO FIRE! The birth of Dany's dragons was unique, magical, wonderous, a miracle. She is called The Unburnt because she walked into the flames and lived. But her brother sure as hell wasn't immune to that molten gold.

Revanshe: So she won't be able to do it again?

A Wiki of Ice and Fire

The Targaryens can tolerate a bit more heat than most ordinary people, though they are by no means immune to fire.

But then again. These statements are most likely about the books and not the TV series. So it is possible that it is changed in the series.

This wiki, which seems to be mostly about the series, states the following:

Targaryens have some common genetic traits such as silver-white hair. Some members of the family are also immune to the effects of fire, extreme heat, or high temperatures.

Remember though that these wikis are maintained by fans that might have the same misconception about the immunity.

Targaryens, as was referenced heavily in the other answers are not immune to fire. Several Targaryens have been killed by fire and dragons in the past.

However (book spoilers ahead):

Dany does survive two fires. However it is still not known why this happened. Is it some form of rare genetic trait that only a few Targaryens possess, or is Dany special in some other way?

But back to the question. What Dany probably meant wasn't that a true Targaryen wouldn't be killed by the molten metal. It was simply her coping mechanism for losing her brother (and until recently her only family) in a very horrible way. For a very long time Dany truly believed that her brother Viserys was the rightful ruler of Westeros and a true dragon. As the frightened child progressively becomes the Khaleesi, she starts to lose faith in her brother. This culminates at his death scene. The man who just died with a crown of molten gold was not the brother she loved a long time ago. He wasn't a dragon.

I thought they were immune to heat rather than just fire, hence the heat from the molten gold (whether it could have got that hot in the pan is another question) would not have killed him if he was a 'real' dragon.

GRRM has stated that Targaryens are not immune to fire. In the past, some Targaryens were killed by fire. Many of them do have a higher resistance to heat than most people. For a good example, read the descriptions in the books when Daenerys lowers herself into a scalding bath. The book remarks that the water was quite hot, yet she felt comfortable in it and did not mind the heat. This is most likely attributed to the Targaryens' "dragon blood"- the purity they wish to keep in their family by inbreeding, which has also resulted in their silver hair and purple eyes.

Daenerys surviving the funeral pyre is not wholly attributed to her Targaryen blood. The book mentions that despite her higher resistance to heat, Daenerys still winces at the heat of the flames as she approaches, and she even is forced to step back. She is kept alive through magic (I believe she was using Blood Magic, with Mirri Maz Duur as her sacrifice), and her title of The Unburnt is because it was a miracle that she survived the flames (the books differ here in that all her hair is burned off in the pyre, but a quick mental image can make you understand why Emilia Clarke probably wouldn't be too keen on that).

So, no, Targaryens aren't immune to molten metal, and Viserys is not a special case. I'm sure if someone put Daenerys in a similar position, or if Drogon went ballistic on her, she wouldn't be getting out alive. The pyre was something of a miracle (and the scene wouldn't have been nearly as awesome if she died anyways).

6
Is Daenerys immune to fire 'always'?
2
Are All Members of House Targaryen Impervious to Flames?

5
What did the handmaiden call Daenerys Targaryen?
19
What is the relationship between Daenerys, Viserys, and dragons?
11
Are House Martell secretly Team Targaryen?
2
Are All Members of House Targaryen Impervious to Flames?
4
Which Targaryen woman foresaw the doom of Valyria?
10
Did Daenerys know how to hatch the dragon eggs?
1
Who is Aegon Targaryen?