What is the word on the executive's face, and why is it there?

The guy who runs Armadyne has a word like "RICH E" or "RICHE" on his face. What exactly is the word, and why is it on his face?

RICHE appears to be a fictional luxury brand. As you can see from this image from the "Art of the Film" book, the bio-beds evidently had the ability to sculpt customised faces designed by various luxury brand makers like Rolex and Prada.

Note that in the film version, they apparently used a mixture of real and fake brands for cinematic reasons:

Elysium citizen flesh design exploration, we did hundreds of these, here were a few 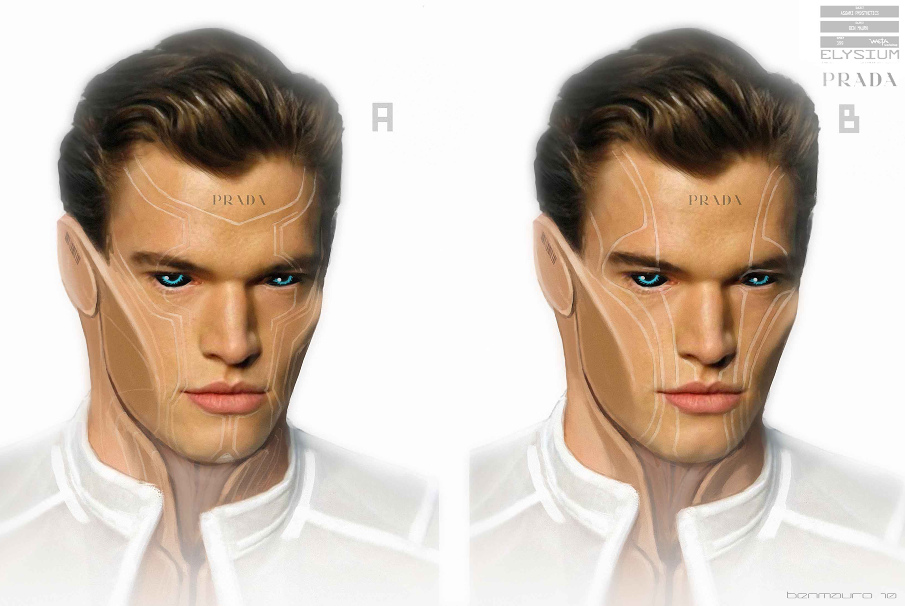 The word on John Carlyle's face is RICHE, which is French for rich. He also has some sort of "branding" on his forehead, so I believe that these are a form of body modification (the proof of citizenship branded on the characters' arms appear to be of the same type).

Director Blomkamp explains in an interview about product placements, "We did make up our own brands because we couldn’t get enough of them," Blomkamp explains of labels such as "Riche," a moniker that is branded onto the skin of characters who have partaken of a beauty enhancement. "We had a binder with thousands of fake brands and awesome logos. But they don’t mean anything to people, they just look like future brands. It doesn’t have the same resonance." 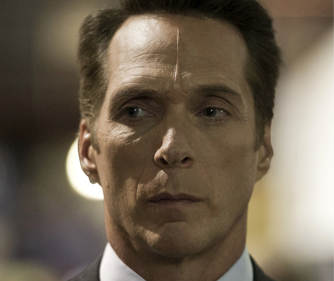 It is my interpretation that language is used as a device to further separate the two classes; Jessica Delacourt spoke French while at the social gathering. The wealthy citizens of Elysium speak French, while the poor citizens of Earth speak Spanish.

The word "riche" has implications beyond just wealth. It also has connotations of power, authority, dominion, etc. I think this supports the theory that having the word embossed in one's skin is a cultural status symbol rather than a fictional brand.

Rich people love rich brands, but I don't think they love them enough to embed them in their skin, seems like something they would find tacky. Admittedly, they would probably feel the same having any word embossed in their skin - but it serves as a quick device to tell the viewer more about the character's motivations. They were able to secure other brands for the movie, so it stands to reason that we would have seen "BVLGARI" or a Bugatti logo on the skin if it was intended as a show of brand loyalty. Carlyle did "drive" a Bugatti afterall.

I also noticed that President Patel in the movie has another word on the same spot of his face. I wasn't able to make out what the word is, but it definitely looks to be a different word. Discerning that word could be the key to a definitive answer.

Not the answer you're looking for? Browse other questions tagged plot-explanation elysium .