Film about scientists studying killer ants in the desert [closed]

I watched a film when I was a kid about a group of scientists in the desert studying a strange ant colony. They had a science building that had an odd shape to it (maybe a dome). There were a couple of male scientists and a female working together.

There are scenes where they show the ants eating an animal in a few seconds (maybe a mouse or rat).

One of the scientists tried to kill the ants and as a result the ants start to build structures around the research building. These structures reflect the sunlight to overheat the building.

One by one the scientists are killed except for the last one. He/she walks out into the desert and falls into a large chamber dug by the ants. In the chamber the person faces the queen ant in some kind of psychedelic mind trip.

The film was made in the 60s to 70s timeframe and might have a post-apocalyptic theme to it. The ants might be the result of nuclear bomb fallout or some other popular fear at the time.

This sounds a lot like Phase IV to me - I'll see if I can find more details for you.

From the linked IMDb page:

Desert ants suddenly form a collective intelligence and begin to wage war on the desert inhabitants. It is up to two scientists and a stray girl they rescue from the ants to destroy them.

Here's one of the domes. 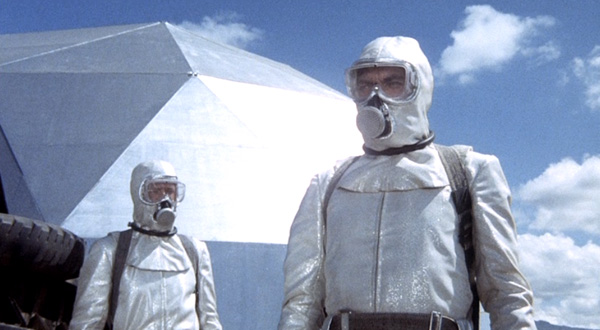