How is "Bonnie and Clyde" dated?

After watching the 1967 movie "Bonnie and Clyde", I read a couple of reviews to see what others thought about it. One review said: "the movie looks very dated. I looks as it it was made at least a decade before it was actually made" (my translation; original in Dutch). Since the movie is made in 1967, that would mean the 50s. However, the review does not mention why the reviewer thinks it's dated; however, having read many of his other reviews as well, the reviewer does seem knowledgeable.

So I'm wondering what makes this difference so obvious? What looks dated most certainly are the scenes inside the car, but apart from this, I find it hard to see anything that looks incredibly dated. So how does one make such an analysis? What are these differences between 50s and 60s movies in general and most importantly, which ones can be found in this Bonnie and Clyde movie?

Unfortunately, you are asking for an explanation for one individual's opinion that could be (and IMHO is) wrong. The only person who can explain the opinion that the movie looks dated, is the person who said it looks dated. I know you mention that the reviewer didn't explain himself, but that doesn't change that if you wanted to know why the reviewer said what they said, you'd have to ask them.

It's kind of like asking "Hey, does this boy like me?" or maybe "What was Jane thinking when she came over my house?"

I personally disagree that the movie appears to be dated, and to form that opinion I am looking at the following things:

On to the Show

Pulling a few 1957 movies up... say The Bridge on the River Kwai, Twelve Angry Men, An Affair to Remember, The Seventh Seal, and Peyton Place... we can have a good selection to choose from to compare some movies from the 50s, to Bonnie & Clyde.

Right off the top, I notice that the acting in Bonnie & Clyde isn't as wooden or "overly dramatic" as it is in the older movies. The actors in the older movies seem to definitely be from an older school of acting... years of experience producing good performances, but they are practiced performances. Even Twelve Angry Men, having been filmed in one room essentially, and having to rely more on the actors than anything else, seems to project a VERY dramatic take expressed in the acting style used by each of the cast. Ok... that was a set-up. Twelve Angry Men is supposed to be overly dramatic. However, The Bridge on the River Kwai is different. That's more about location and sets... and the acting is still far more dramatic than what you find in B&C. So, my point is that the acting styles in B&C don't line up with the acting styles you find in movies from a decade before.

This one kind of meshes with Movie Content a little. B&C makes extensive use of off-set filming (outdoor shots, location shots, etc) as opposed to filming on a dressed movie set. I'm not saying that all the movies out of the 50s used sets (The Bridge on the River Kwai was all location)... however, most movies coming out of the 50s used time honored traditional methods as opposed to expanding into new territories. What I mean, is that rather than use a location shot and film inside a real house, the Studio would more likely authorize building a mockup of the interior of a house to control the shot better. IMHO, the filming techniques of B&C don't make it look like a movie made in the 50s.

Almost all of the cast of B&C are either new to full length movies, or have little experience with movies from the 50s. That would mean that there wasn't much of that old school acting going on. The cast seemed to have been chosen for fresher faces.

There were several newer things shown in B&C. Squib usage, for example. Death scenes were far bloodier in B&C than movies made previously. B&C was considered one of the bloodiest movies of its time. Before B&C, gunshot deaths were typically bloodless. The Graphic violence was over the top, and hadn't been seen to that degree before. The sex was also handled a bit differently than movies that came before, to the point where it was considered groundbreaking. In general, that word itself "groundbreaking" gets applied multiple times to B&C, which right there would remove any comparison to movies that came out in the previous decade.

To conclude, I believe that reviewer was wrong, regardless of how knowledgeable he seemed. The movie might seem dated compared to today's films, but it wasn't dated compared to other movies that came out at the time.

I think that this is a hard question to answer. We’re trying to rationalize another person’s subjective opinion with objective reasoning. Given that difficulty, I think that the answer to this question lies in choices that were either made (or forced upon them) by Arthur Penn (director) / Burnett Guffey (DP) regarding the film development process and aspect ratio. These two factors give Bonnie and Clyde the look of a movie made in the 50s. (it might be that all movies made with technicolor have an aspect ratio of 1.78)...

Film Development: The film was developed using Technicolor which had its heyday between 1922 and 1955. By 1967 Technicolor was already outdated by 12 years. Due to one limitation of Technicolor, light had a difficult time making it to the film. This meant that films made using this film had to be over lit. This caused much softer shadows. Notice the similarity between the look of the picture between Bonnie and Clyde (1967) and Gentlemen Prefer Blondes (1953). Then notice the difference between Bonnie and Clyde (1967) and The Graduate (1967). 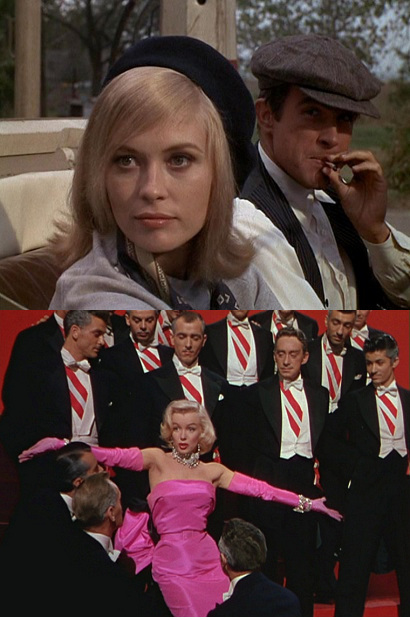 Aspect ratio: This is the big reason B&C looks dated. Bonnie and Clyde was shot using a “spherical” cinematic process. This gives the film an aspect ratio of 1.78:1. By 1967 the standard had shifted from “spherical” to anamorphic (which double the visible width compared to height of the frame). Even in 1957 anamorphic process was present with CinemaScope. The aspect ration for 1957s Bridge on the River Kwai was 2.35:1.

Movies up for best picture in 1967 and their aspect ration:

You can see the difference in aspect ratio in these stills (even in 1957 the shift away from Technicolor can be seen): 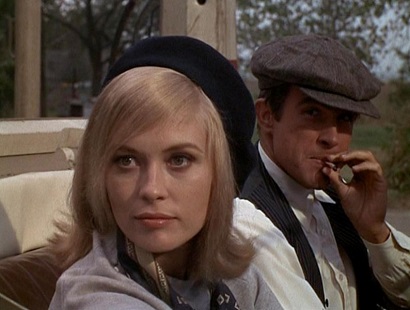 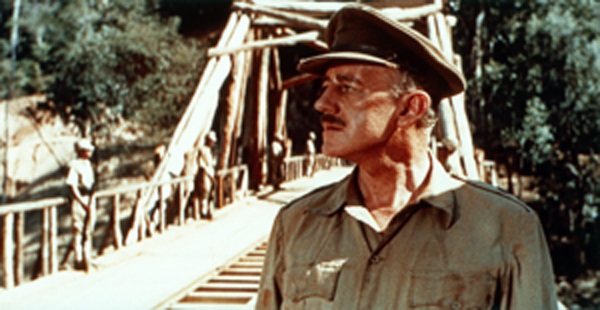 The 1967 film Bonnie and Clyde has the look of a movie made in the 1950s because it used techniques from a previous age of movie making.

This does not in any way diminish the films impact, relevance or importance. It is one of the defining movies of the 1960s, and rightfully so.

Not the answer you're looking for? Browse other questions tagged analysis bonnie-and-clyde .

28
How do the differences between the replicants and Deckard evolve in Blade Runner?
25
How to describe Elsa Schneider in Indiana Jones and the Last Crusade?
9
How did Saito know he was under attack by extractors Cobb and Arthur in Inception?
10
How were Sonny and Don Corleone at odds?
19
In Westworld, how can guests tell the difference between guests and hosts?
3
What is the significance of each of their patronuses and how do they work?
7
How do Phineas and Ferb fund their projects?
0
How are Madam Vice President and Philly Falzone's agendas related in Prison Break?