How did Fred (mannequin) move outside the store?

Remember Fred from I Am Legend? 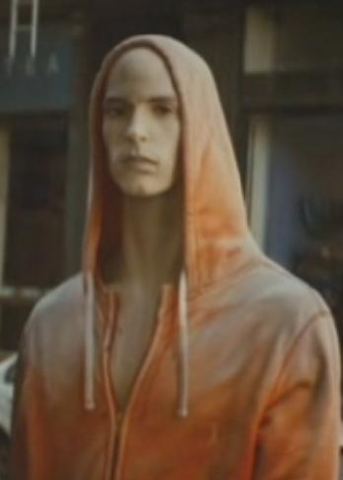 This is the scene.

Any idea how Fred did get there in the first place?

It's entirely plausible that Neville simply forgot that he placed Fred there in the first place. Don't forget, this is a man who has been living by himself for who knows how long (essentially trying to fool himself into thinking things are still 'normal' by playing video of morning programs, as if we were watching the normal morning shows), and although he had a regular routine, he could very easily have forgotten that he placed Fred there, especially since he forgot the trap he had set up there in the first place.

Fred was used as a bait by the zombies, evident from the trap set there. This leads me to think that it was the zombies who took Fred out of the store and placed him (or it) at the location in the scene. This is only possible explanation I can think of.

They are not zombies, therefore who's to question their level of intellegence? It is a hybrid disease of measles and rabies, therefore I believe they set the trap in retaliation after he trapped the female "dark seeker" and left all of the evidence of his trap behind, and they just copied it to their favour.

My interpretation of this scene is that Robert did in fact place Fred there, to keep a sense of normality as someone stated above. After all, it isn't set in stone that the mannequins remain in the same place all the time. I mean, who hangs out at a Movie Store? Moreover, Robert is clearly going insane from being alone and in such a hostile environment. A normal person in their right state of mind would have seen the mannequin out of place from where they last remember leaving them, and rationalize "Okay, how the hell did it get there?" But he immediately swerved into a panic and began interrogating an inanimate object. While it's clear the mutants were changing in the movie, I doubt it's anything more than what Robert described. That circumstances have caused them to ignore their basic survival instincts. One might argue that the central male mutant we kept seeing in the film is more evolved than the rest --even sentient, but I see no reason to believe that. What we saw in the movie was basic "pack animal mentality", essentially the male was the Alpha. The natural leader. Stronger, more aggressive, dominant. As for the "meaningful eye-contact", aside from that being for movie drama it's nothing but typical animal behavior. Looking an animal in the eye is considered a challenge in the animal kingdom. Ever wonder why your dog can't stare back directly into your eyes for long?

I'm of the firm belief he's simply flipped his lid and gone bananas, so to speak. After all, there were no indications in the movie that the mutants were showing any signs of intelligence --in fact Robert himself states that their minds have completely diminished. However, there are signs left and right the whole time that Robert is simply a broken, lonely man in a hostile world that's constantly trying to kill him. He went through that upwards of a thousand days. Can anyone really testify they could last longer without snapping?

This scene could possibly be interpreted in many ways. One possible way is if the zombies were smart enough to know where he lived at the end, they were probably smart enough to set a trap at night time.

4
How did Fred's head turn?

11
Why did Fred Johnson say the crew of the Rocinante was no longer welcome on Tycho station?
4
In Hereditary, how does Annie get into the attic?
5
How did Loki activate the Space Stone?
0
How did Mills and Somerset know about the leather shop?
12
How did Thanos originally get the Mind Stone?
4
How did Fred's head turn?
15
Why didn't he give Sam the antidote?
4
How did Claudia come back from the dead in Dark?