Any homages to The Glass Key in Yojimbo, A Fistful of Dollars, or The Last Man Standing?

Ok. I'm having trouble locating a copy of The Glass Key (1942) but that's not what I'm asking about. I just haven't seen it, so I can't get the information I seek myself.

Anyone familiar with Akira Kurosawa's Yojimbo has most likely also seen Sergio Leone's A Fistful of Dollars. Whether you watched them because they are the same story, or you found that out afterwards... or you just liked them independently, you would have noticed that although they are the same story, there are details that are different between them. Now, Walter Hill directed a Bruce Willis film called Last Man Standing, which is also the same story as those other two. There are specific nods to both previous versions. Nods such as...

Bruce faces thugs when he arrives who assault his car. Clint Eastwood faces thugs who harass his mule. In Yojimbo, Toshiro Mifune is on foot, so the Nod is from Last Man Standing, to Fist Full of Dollars.

After being captured, Clint is assisted in his escape by being hauled off in a coffin. In Yojimbo, Toshiro escapes the same way at the same point in the story. Bruce however, is taken away in a car. So this Nod is in Fist Full of Dollars, to Yojimbo.

I've never seen The Glass Key, but all three of these movies are based on it. One of the differences between it and all the others though, is that Alan Ladd who plays the character playing both sides against each other, is actually loyal to Brian Donlevy... while in the later three films, the protagonist is loyal to neither side. Akira Kurosawa supposedly introduced this change on purpose.

Here's my question. Are there specific nods in any of the three subsequent films to the original, The Glass Key? They could be small or large, but they would be details you could connect back to the original.

I finally got a copy of The Glass Key and watched it. It is a good movie, and more to the point a good murder mystery.

The information I had read online (including apparently information from Kurosawa himself) at multiple different sources put The Glass Key at the beginning of chain of movies I listed in the question. I can see where Kurosawa would have seen inspiration in this movie, but honestly it doesn't appear that Yojimbo is an adaptation of The Glass Key.

For one, the central plot in Yojimbo, and subsequently A Fistful of Dollars and Last Man Standing, turns out to only be a minor plot device in The Glass Key. That being the concept of one man in the middle, playing both sides against each other. Although there is a build up to a scene like this in The Glass Key, it is just that... one scene. It also doesn't work out the same, both in the work up to it, and the way it plays out. The Main character starts off the movie loyal to the Boss of one side (in the two sides in this movie). He makes a partially public break from his Boss, gets the head of the other side to offer a large pay off and start to give him information... but the plot similarity seems to end there. He doesn't take the money, and... well... read on.

Now... the scene immediately following takes place in a warehouse apparently. There appears to be the makings of a still in the background of the room, and the main character is beaten badly by thugs in this room. He distracts his captors and escapes... and it seems that all three subsequent movies all use this scene in the movie, albeit loosely. However the specifics of the opening of this scene, and the contents of this scene appear to be a nod from Yojimbo to The Glass Key. 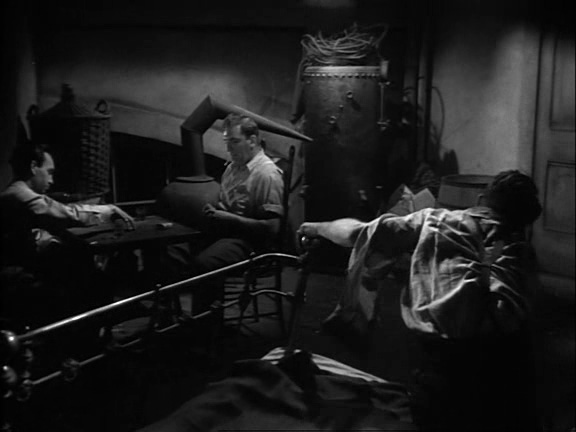 Here is the main character in The Glass Key, getting up after being beaten before the scene begins. We don't see the initial beating, we only get to watch some more of it in the scene itself. The still can be seen in the background. His captors, a large thug who does all the beating, and a small thug who seems to provide comments, are playing a game of cards while they "watch" the main character. Immediately after that screenshot, he crawls across the floor and attempts to get out of the door, but is picked up by the large thug, carried back to the bed, and beaten. The little thug warns the big one not to kill him, and the big one shrugs it off, talking about how tough the main character is. During the scene he is beaten more, but his captors get no further information out of him.

Here is the main character in Yojimbo, waking up after a beating, in a storeroom of a brewery. His captors, a big thug and a small one are playing a game to pass the time. Our main character crawls across the floor and attempts to get out. The big thug almost lifts him by his head, and actually throws him across the room away from the door. The little thug warns the big one not to kill him, while the big one shrugs it off pointing out that he is fine because he is "groaning". The scene cuts soon after.

The similarities of these two scenes down to the actors, their actions and the rest of the scene content, are so close in the way they play out that it can only have been done on purpose by Kurosawa as a tip of the hat or an homage to Stuart Heisler and The Glass Key

I'll have to watch The Glass Key a few more times to see if there are any more scenes like this one, but like I said, the main plot of the movie is very different from Yojimbo, A Fistful of Dollars, and Last Man Standing. With such a large difference, the contents of all the other scenes in the movie play out quite differently.

39
Why did Michael Richards refuse to portray himself?
22
Is the Good, The Bad and The Ugly set before a Fistful of Dollars?
28
What is the significance of a man sitting on the train engine in the last scene of "Live and Let Die"?
43
Is the man with no name the same character?