Why was McGarrett wearing an Army uniform?

I don't normally watch Hawaii Five-0, so I'm not familiar with the intricacies of the characters' histories, but last night I watched an episode from Season 3 (episode 20) titled "Olelo Paʻa", or "The Promise". Much of the plot involves Steve McGarrett attempting to retrieve the body of a fallen Navy SEAL comrade from North Korea. The episode includes many flashbacks, including McGarrett and his friend as Navy SEAL's in training and on a mission. From the beginning of the new Hawaii Five-0 series, Steve McGarretts back-story was that he is a former Navy SEAL.

However, in the "current" time, McGarrett is seen wearing an Army uniform, as seen in the photo below (the woman beside him is wearing the comparable Navy uniform). I've checked several show-specific wikis and can't find any reference to him ever being associated with the Army. All references are to his Navy SEAL background.

Does anyone know why McGarrett was wearing an Army uniform? All former military personnel that I've ever met are fiercely loyal to their branch and wouldn't lightly wear another uniform. 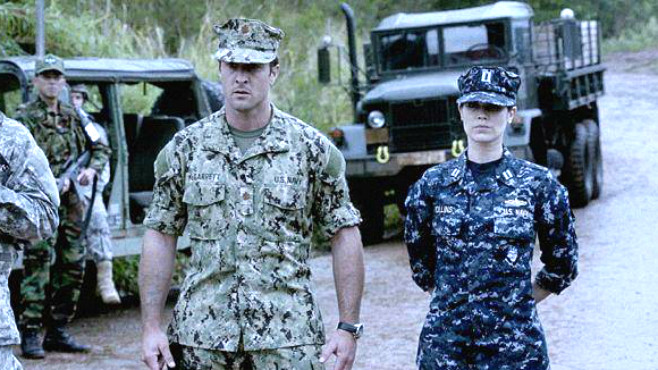 Summarizing from the Wikipedia article on Uniforms of the United States Navy: The USN has three classes of uniform for different uses: Dress (for formal occasions), Service (for daily wear), and Working (for use when other uniform types would be unduly soiled or are otherwise inappropriate). The Working uniforms come in three colour groups, depending on where the sailor is serving: predominantly blue, woodland, and desert. The latter two colour schemes are specifically mentioned as being used SEALS.

So I think your question is based on a faulty premise - McGarett is meant to be wearing a woodland-colored working uniform, which could be mistaken for an army uniform if one is not familiar with the intricacies of navy uniforms.

This is the United States Navy Working Class Type III uniform. It is used by Navy EOD, and Navy SEALs and those in The Navy Special Warfare Combatant-Craft Crewmen (SWCC pronounced "swick"). It is not used by the Army.

Here in the picture for example, we've got both US Navy uniforms: Navy Working Uniform Type III (aka AOR 2, or Area Of Responsability 2, in woodland but with more green than MARPAT Woodland used by US Marines Corps) and, on the right, NWU Type I, which is the standard uniform dressed by sailors on the ships.

For Navy personnel operating on the ground, in the Area of Responsability 1, there is also the NWU Type II, VERY VERY VERY similar to US Marines MARPAT Desert.

They are both Navy uniforms. One is a navy seal and ground team uniform (green) the other blue one is the basic service duty uniform. The navy has a long history of having more than three different types of uniforms and they are holding true to that history to this day. No Army uniforms appear in this photo, trust me I've been in the Army for 10 years.

That is the Marine Corps digital camoflauge or MARPAT, since the Marines are a department of the Navy(The mens department), Navy ground forces it. Seals, Corpsman, etc. use it with US Navy name tapes

Not the answer you're looking for? Browse other questions tagged plot-explanation hawaii-five-0 .

4
What was the purpose of showing Private White sitting in full uniform?
5
Did Aegon have an army?
14
Why was Finn even wearing the jacket in the first place?
5
Why are the asylum guards wearing cages on their heads?
5
Why is Detective Danny Williams absent from so many episodes?
11
Why was Amarendra Baahubali calm while being removed from his position as army commander?
1
Why did Season 7, Episode 3 of "Hawaii Five-O" use a Hillsong United song?
0
Why was Katniss Everdeen wearing her arena outfit in this scene?
5
Why did Marie start wearing black?
0
Why did Yamamota want to go against the Army?