Where did the T-Rex come from?

Although there is no disputing the impact that Steven Spielberg's Jurassic Park had when it was released in 1992, there has always been one scene that has bugged/perplexed me.

I speak of the climax, when Alan Grant et al are surrounded by the Velociraptors and about to be pounced upon, when suddenly the T-Rex lunges in and 'saves the day'.

It has already been established earlier on the film that the T-Rex telegraphs its approach with thunderous footsteps, and I'm pretty sure that even if the humans were surrounded by malevolent reptiles, they would notice a huge T-rex squeezing in through the front door of the reception center.

Possible explanations include the T-Rex's ambushing skills (as evident in the earlier Gallimimus chasing scene), the afore-mentioned distraction of the Velociraptors, or even a huge suspension of disbelief to better serve the dynamism of the scene.

I don't like the idea of T-Rex just being shoehorned into the scene to add some va va voom, so is there a better explanation?

Well I never wondered about this. There has been quite a chaos (with them falling through the ceiling into these skeletons) immediately before it, under which an approaching T-Rex could really get lost.

So I would indeed attribute this to the distraction created by the velociraptors and the overall chaos of this scene (both for the audience and the characters). And maybe a bit of trying to create a very surprising moment by sacrificing a small bit of realism (which never bothered me at all).

The simplest answer is that the T-Rex didn't come in through the main doors, it came through the (now open to the elements) side entrance, shouldering its way through the scaffolding: 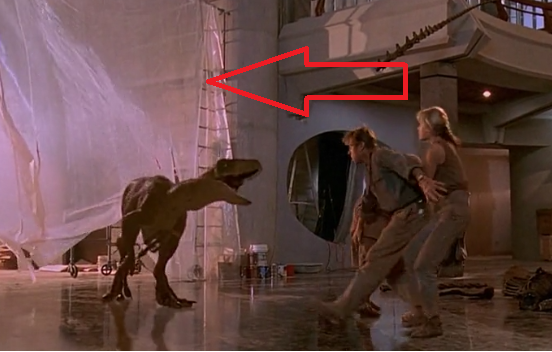 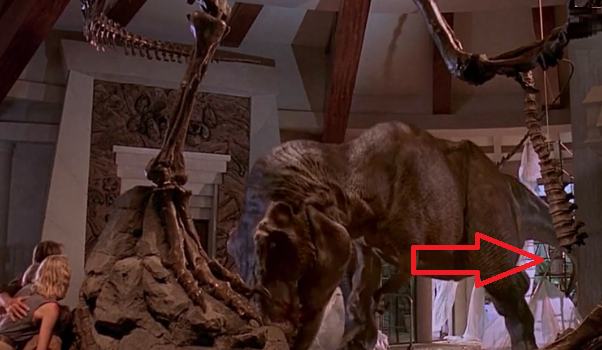 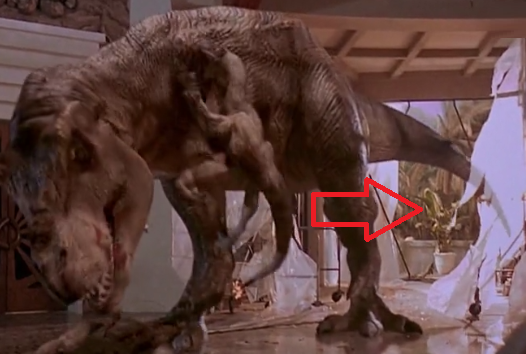