What does the smile in Railley lips signify?

In the final scene of 12 monkeys, we see James Cole is shot dead and as he said earlier his child copy is present there. Railley sees him and smile comes to her lips. What does it signify? Does it mean she hoped she had not lost Cole and that she is meant to be with him in coming time? Is Cole bound in a never ending time-loop? 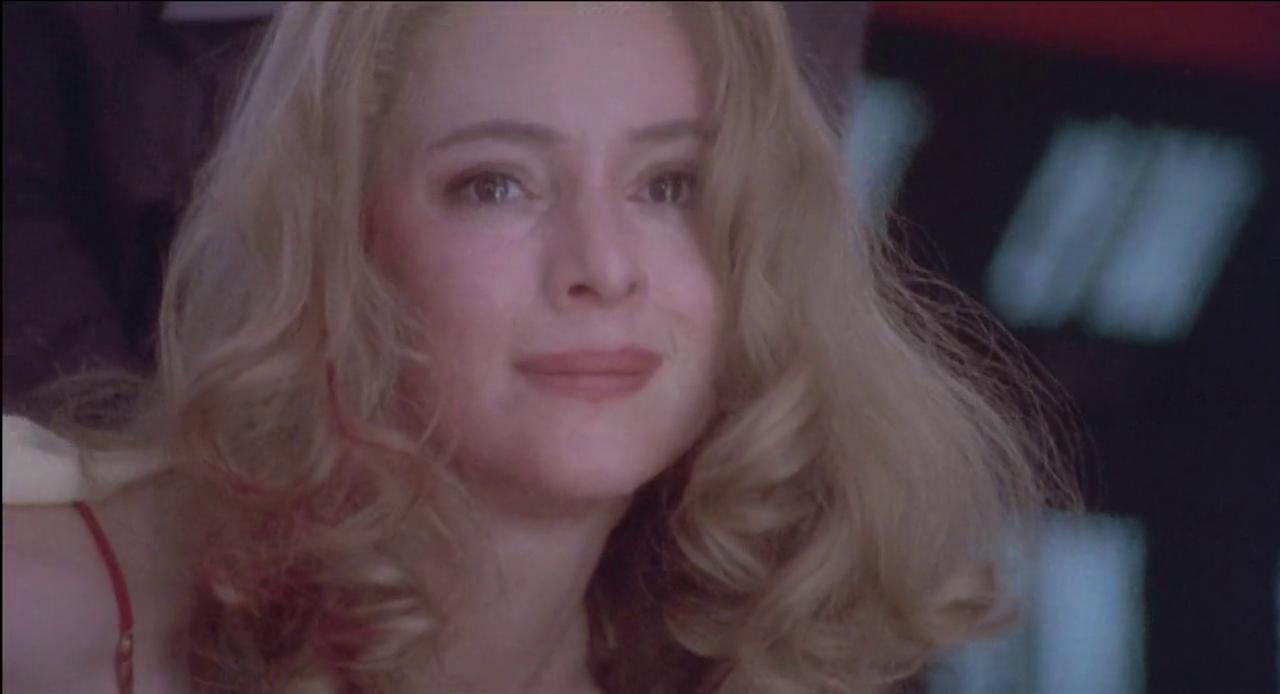 It is more of a wry, fatalistic, and sad smile, as when she sees young Cole at the Airport, she finally puts all the pieces together from what Cole had told her.

In the theater, Cole falls asleep and remembers/dreams seeing her running in the Airport. He wakes panicked, to find her gone. He runs into the lobby to see her as a blonde, just as she was in his memory/dream.

In a sympathetic response, she replies with "I remember you like this."

Cole becomes confused. "You do?" he asks.

She says "I felt I've known you before. I feel I've always known you."

Cole's confusion deepens, and he replies "I'm so scared."

That scene is important, because it shows how she has really turned that corner, in believing and wanting to believe what Cole tells her. She feels it is more important for him to understand that she is with him. More importantly, she wants to believe him, to the point of making herself think she has indeed seen him in the past and her dreams.

For Cole, he knows to some degree that his dream is founded in a memory, and he knows he has traveled through time. So for him, dreaming and remembering her at the airport when he was a kid is more of a revelation when he sees her as a blonde. What confuses him so, and begins to scare him, is when she not only agrees with him, but tells him that she has always known him as well. Cole knows she hasn't traveled through time. Cole knows she couldn't have seen him in her past. He may even begin to doubt his sanity, and his dreams/memories at this point... for he had previously believed that it was a memory. However, if what she was saying was true, that she really felt like she had always known him as well, then he might not be remembering things.

So, later, at the airport, when she sees him as a child, the last pieces of the puzzle fall into place for her. She knows that she is doomed (along with most everyone else) because he was telling the truth all along. Any lingering doubt she had at that point has washed away. She knows he was telling the truth in the theater when he said she was in his dream. She knows that she scared and confused him by telling him she had always known him. It's an OMG moment for her. She knows that he survives the coming wave of death, only to be sent back to die before it happens. The futility of everything they have done settles on her, and it all comes out in that smile.

So, I wouldn't say that the smile is honestly a happy one, except in that she was relieved to know the man she fell in love with wasn't crazy after all.

This smile is the most important shot of the entire film. It indicates that Railey is satisfied knowing that young Cole will go through everything that happened, exactly as it happened before.

With this, it answers the central question of the story. If everything is predetermined, so that the tragic impotence of our actions is already a foregone conclusion, how can we be happy?

She reaches the same conclusion as the 19th century philosopher Friedrich Nietzsche, who writes,

The Heaviest Burden. What if a demon crept after you into your loneliest loneliness some day or night, and said to you: "This life, as you live it at present, and have lived it, you must live it once more, and also innumerable times; and there will be nothing new in it, but every pain and every joy and every thought and every sigh, and all the unspeakably small and great in thy life must come to you again, and all in the same series and sequence - and similarly this spider and this moonlight among the trees, and similarly this moment, and I myself. The eternal sand-glass of existence will ever be turned once more, and you with it, you speck of dust!" - Would you not throw yourself down and gnash your teeth, and curse the demon that so spoke? Or have you once experienced a tremendous moment in which you would answer him: "You are a God, and never did I hear anything so divine!" If that thought acquired power over you as you are, it would transform you, and perhaps crush you; the question with regard to all and everything: "Do you want this once more, and also for innumerable times?" would lie as the heaviest burden upon your activity! Or, how would you have to become favourably inclined to yourself and to life, so as to long for nothing more ardently than for this last eternal sanctioning and sealing? [The Gay Science, 341]

To Nietzsche, however, this eternal recurrence is a challenge we must pose ourselves. Can we say this about our lives? How differently would we live our lives if we made this our primary concern?

Only extraordinary individuals can be content with the idea that their life will recur eternally. Such a person would affirm life in every action they take, which is Nietzsche's highest ideal.

In the case of Railley, it is not so much her own life as that of Cole that is affirmed. Her love for Cole -- not just Cole as an idea, but Cole as he really exists in the world -- makes her happy to see him live, and die, in an eternal loop, forever. She wouldn't change a thing about it, because that would mean changing Cole, and Cole is already perfect as he is.

That is what makes the moment so powerful, I think.

16
Why don't they try to change the past?