Is Pikachu's gender ever confirmed?

I was recently having a discussion about Pokémon, and it came up that none of us were sure whether Ash's Pikachu in the series was male or female. Some (myself included) always thought it was male, whereas others could've sworn it was female.

Was there ever any canon evidence to point in one direction or another?

According to Wikipedia, there are male and female Pikachu:

Standing 1.04 ft (0.4m) tall, Pikachu are mouse-like creatures, and were the first "Electric-type" Pokémon created, their design intended to revolve around the concept of electricity. They appear as mouse-like creatures that have short, yellow fur with brown markings covering their backs and parts of their lightning bolt shaped tails. They have black-tipped, pointed ears and red circular pouches on their cheeks, which can spark with electricity. In Pokémon Diamond and Pearl, gender differences were introduced; a female Pikachu now has an indent at the end of its tail, giving it a heart-shaped appearance.

This evidence comes from the game. I cannot find evidence of a female Pikachu in the television series, but presumably since they are from the same franchise, it would hold that Ash's Pikachu is male.

It is officially male!

After reading through the entirety of the Bulbapedia Article on Ash's Pikachu, specifically the Trivia section, it is confirmed that Ash's Pikachu is in fact male:

In Where No Togepi Has Gone Before! it was confirmed that Pikachu is male. His physical appearance could not be used as proof, since gender differences were not implemented until after he had debuted in the anime.

Further to Mary Jo Finch's answer, there is another recent episode (Beauties Battling for Pride and Prestige!) where Pikachu disguises himself as a female, seen here: 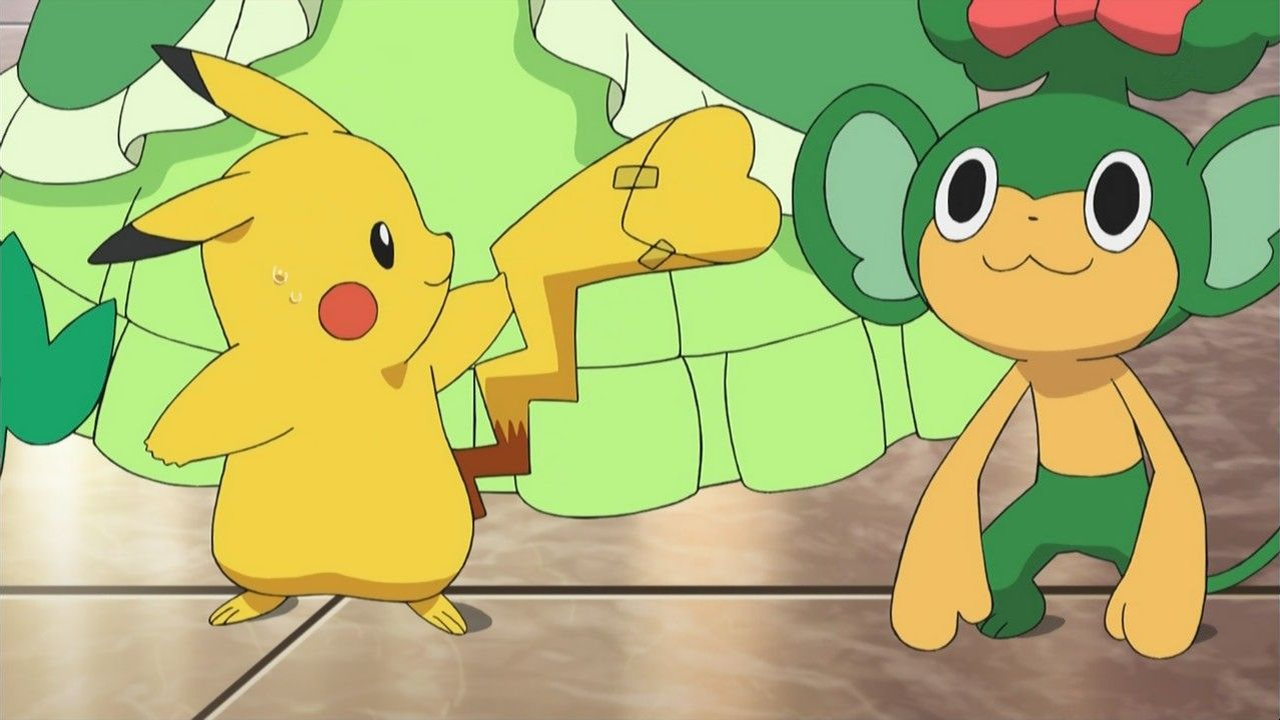 Pokémon the anime started in 1997. Gender differences in a pokémon species was added in 1999, in Generation 2 of the games. The Togepi episode was 2009, the Beauties episode was 2012. 12 years to find out Pikachu is male.

In Pokemon black and white, episode 1-7 a female snivy uses attract on pikachu and it worked. Right after a character named iris says "it worked on pikachu so snivy has to be a girl!" And then later in the show says "attract only works on Pokemon of the opposite gender".

Ash's Pikachu is female because in one episode of Pokemon Black and White a female Pokemon used attract on Pikachu, but it doesn't work.

In the game, when Pokemon A uses the move Attract on Pokemon B, if Pokemon B is the opposite gender of Pokemon A, Pokemon B gains the status effect Infatuate, which causes their attacks to miss 50% of the time until the status effect is removed (the simplest method being to simply switch Pokemon B with another Pokemon from the trainer's roster).

The only qualifier for Attract to work or fail is the gender of the Pokemon the attack is used on. Both Pokemon do not need to be the same species.

pikachu is male because in black and white the anime just like all of the other male pokemon pikachu is attracted to emolga. Also its tail does not have a heart.

It's a male. I know because female Pikachus have a heart like tail while male Pikachus don't. It's very obvious if you have played a Pokémon game. Besides, everybody who has played Pokémon Alpha Sapphire or Pokémon Omega Ruby knows that Cosplay Pikachu is a female, but can dress up as a boy.

In a quick answer, Ash's Pikachu is a male.

"In 'Where No Togepi Has Gone Before!' it was confirmed that Pikachu is male. His physical appearance could not be used as proof, since gender differences were not implemented until after he had debuted in the anime."

Came from the wiki. May not be the best source but it's pretty darn accurate in most cases. He is also referred to as 'he' and not 'she'. Not only that but one can assume Pikachu is a male because the show is mostly aimed and viewed by males. There were also some game events where ash's pikachu would be distributed, and he is a male in all distributes of the events.

Not the answer you're looking for? Browse other questions tagged character pokemon .

5
Is Geeta shown as a Trans-gender in the Tamil Movie “Kanchana”?
13
What is Mr. Kitty's gender?
3
Did Loker ever start getting paid again?
5
Are Hanson and Penhall confirmed dead?
7
Is it ever confirmed, or at the very least strong insinuated, that Saga has Asperger syndrome?
67
Switch in *The Matrix* - Two Actors?
23
Why will Dorothy miss Scarecrow the most of all?
17
Was Martin Riggs' age ever established?
42
Was Sheldon Cooper ever proven wrong?
23
Does the Orange League not count as an official Pokemon League, making the Alolan League Ash's first-ever win?