Has it been officially announced that Star Wars Ep VII will be in 3D?

While reading this article, I noticed the throw-away line at the end which states that the new Star Wars film due for release in 2015 will be in 3D.

Granted, I understand that most of the tent-pole films these days are released simultaneously in 2D and 3D, but I am wondering if there has been any official confirmation of Star Wars Ep VII being shot and presented in 3D.

No, it has not been officially confirmed, not has any such indication been given. I've gone through press releases, fan sites, wikipedia, official sites and such, and there is nothing other than production dates. But I suppose personally, they would certainly release it in 3D as most big budget films are these days.

3D has become ubiquitous for most blockbusters, and next monthâ€™s Star Wars: The Force Awakens is no exception. Between 2D and 3D, 70MM IMAX and standard, there are a multitude of different ways to be able to experience the movie.

So there are three versions of the new Star Wars movie: 2D, standard 3D, and 70MM IMAX 3D

According to slashfilm.com, Director J.J. Abrams only shot one sequence in The Force Awakens on 70mm IMAX film stock, the rest was shot on 35mm film, and in an interview he claimed

When I was watching the reels in 3D, there were a number of shots â€” and I know this sounds insane â€” that I hadnâ€™t understood in the three-dimensional space quite the way I did when I saw them in 3D. I actually felt that there were things that were playing better in 3D. I had never felt that before. And if people have access to a theater that has laser projection, it is shockingly better.

The following images illustrate the differences between the normal 3D format and the IMAX 70MM. 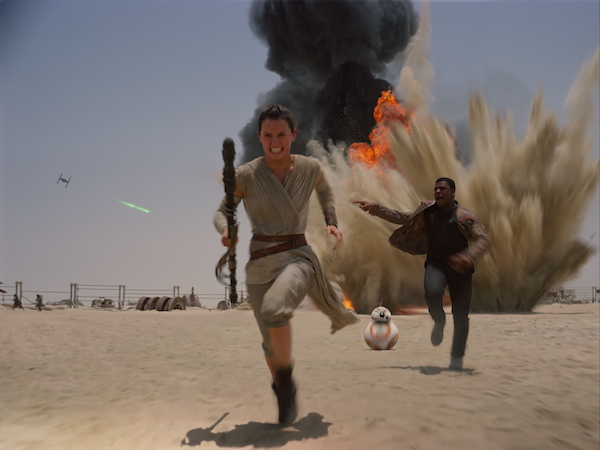 The website Tech Insider recommends fans to watch the 3D version, but only if the movie theater accommodates the 70MM IMAX version

Unless you're seeing this on a true IMAX screen and in 70mm (one of these theaters), go with the 2D tickets.

Since the movie will be shot on film and almost without CGI, the movie most likely won't be shot in 3D. But maybe it will be post-converted to 3D.