Why does General Zod need armor in the Man of Steel film?

As asked on Quora:

General Zod seems like he's wearing substantial armor in the Man of Steel trailers. Is that something that rips off when he receives the first Kryptonian punch, is it tougher than human armor because it's Kryptonian or is there some other reason wearing armor would be helpful to him? 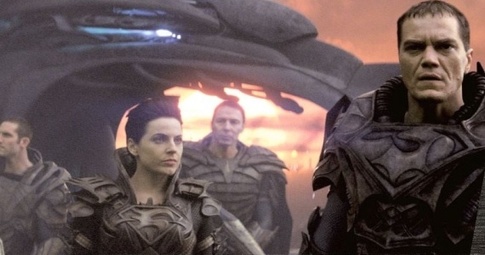 Considering that Kryptonians do not have any actual power unless they're under a yellow sun, and also considering Zod and his gang are part of the Kryptonian army, it seems rather traditional and normal for these folks to be wearing armour.

Towards the end of the movie, Zod gets rid of his armour in order to face Kal'el in their final battle, realizing that due to his new powers, he doesn't need this armour any more.

The other answers are great, the only thing I'd add (beyond the fact that he will indeed need armour on Krypton) is that armour is about more than defense. It's very ornamental!

He's the head of the Kryptonian military, his armour is about more than defense (clearly shown by the symbol of his house on his chest). It's for decoration and rank.

Kryptonians are very strong, but they aren't unbreakable. Their armor, which appears to be made of various super-dense elements is both ornamental (identifying their clan and affiliation) and functional. It prevents them from coming to physical harm, on their homeworld, where they merely possess modestly superhuman strength and on Earth, where they possess godlike abilities.

Jor-El's armor is of a very similar construction to Zod's

An avalanche of pulverized carbon and silica smashed him to the floor, burying him beneath heaps of rubble.
His armor shielded him from serious injury, but he found himself trapped, unable to move.

The armor also serves as an environment suit

She walked briskly across the runway toward Superman; confidence echoed in her every step. She saluted him with military precision and activated a control on her armor. Her visor went transparent, revealing the striking feature of an attractive female with short dark hair and icy brown eyes. Like Jor-El, she could easily have been mistaken for human.

Clearly female, she wore an intimidating suit of jet-black armor. Jagged fins added to the uniform’s fearsome aspect. A space helmet, with a visor that consisted of an opaque force field, concealed her features—even from his X-ray vision.

All quotes from the film's officially licensed novelisation by Greg Cox

Zod is a Kryptonian general, and the others in the picture are his fighters, who generally wear armor (bulletproof jackets in this era). Armor is tough but not for Superman's punch; it doesn't get torn apart easily, but doesn't save them from every punch. Even Zod removes his armor after realizing his powers.