Translation of hospital scene from 'Lost in Translation'

During the hospital scene in 'Lost in Translation', Bill Murray's character tries to have a conversation with an elderly Japanese man. They are unable to understand each other and have a couple of women laugh as they overhear their attempts at conversation. The version of the movie I have does not subtitle this scene. Can someone please tell me what the conversation is about and what the humorous aspect is for the women listening?

Partial as I haven't checked how much of the dialogue is missing:

Should get you started:

Sofia has said in an interview that it was a MAN, which it was; that one of the laughing women was the MAN's daughter; that it was an improvised scene and it was so good she put it in. I don't think the women are laughing because Bill Murray is funny, but because he can't understand what the MAN is saying.

He is asking Bob how long he has been in Japan (Nippon). He tries to use his hands to verbalize by making a round clock and stopping his finger at a certain point.

The most direct translation would be "how many years have you been in Japan?". This of course is and idiomatic expression that the Japanese use to ask how long a person has been in Japan. For whatever reason this is usually the first thing a non-Japanese person is asked. I lived for over 2 years in various parts of Japan including Tokyo and never figured out the rationale behind that question. The hand gesture relates to a clock or the passage of time and is ubiquitous among older people when asking the question posed in the movie. If you understand what the man is asking it makes it all the more funny that Bob is totally lost.

"Nihon ni nanen iru no desuka?" - How many years have you been in Japan? Mutters to himself "Ore, eigo wakaranai kara na." - I don't know English. He makes an attempt at English with the words - "Nihon ni' - "Japan up", "nanen" (making a counting hand gesture) and "aaso" gestures drawing a circle and pointing in the center (illustrating "you are here") and then laughs and nods when Bob Harris faithfully mimics the gesture.

In the end credits the actor is listed as "Old Man" and his name is Akira Motomura.

and just to reinforce it: 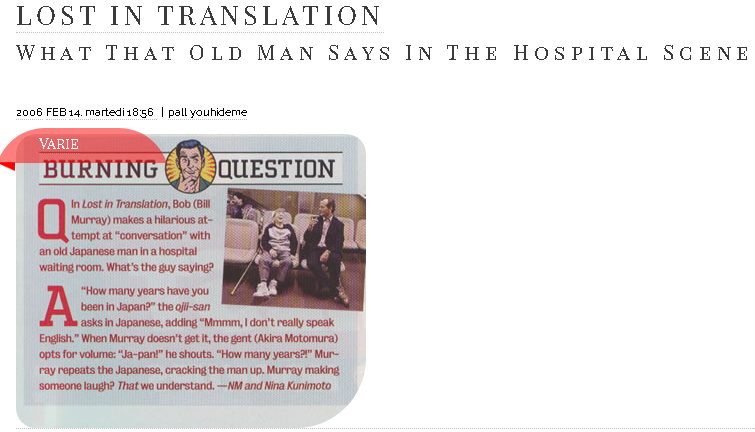 In the hospital, the question that the elderly man with the cane tries to ask Bob (in Japanese) is, "How many years have you been in Japan?"