In Blitz there is a police informant by the name of Radnor (played by Ned Dennehy) who seems 'too dumb to live'1.

Here are two snaps of him casing the premises of the guy he knows has killed one police officer, and who intends to kill more. 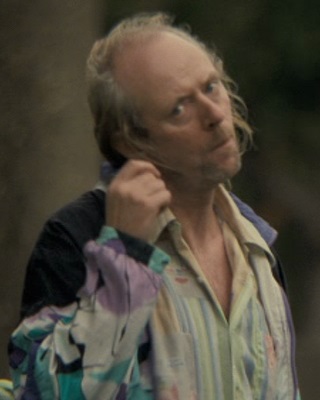 I was convinced that this character was supposed to be (a - monumentally - stereotypically dumb) Irishman, and it was one more reason not to like the movie. But while watching the movie again recently with a friend, I made a comment to the effect 'here comes the dumb Irishman' to which my friend expressed surprise, presuming him to be English.

His accent made me think he was Irish. Was I wrong? Was he supposed to be seen as English? His accent did not seem the same as the other people in the movie (even the actual killer, who is ironically played by an Irish actor). If wrong, where does that accent originate from?

Two lines of dialogue from the movie (about twenty minutes in) are suggestive:

I doubt you have any real Irish blood in you, Radnor.

The first suggests that Radnor has at least claimed to be Irish, even if the other speaker doubts it.

In the second, Radnor claims to be a "Celt". In modern usage, this would refer to someone from Wales, Ireland, Scotland, Cornwall, Isle of Man or Brittany; while Cornwall is technically part of England, none of these could be called characteristically "English".

Since Ned Dennehy is in fact an Irish actor, that would seem the best bet for his character.

Not the answer you're looking for? Browse other questions tagged character blitz .

23
Is Victor Creed from "X-men Origins: Wolverine" actually Sabretooth?
12
What are the origins of the name 'Malekith'?
1
Is Buzz Lightyear forgetting his origins like Woody?