Why is Quirrell praying the Islamic prayer?

Something I've wondered ever since I first noticed this shot in Harry Potter and the Philosopher's Stone (the Ultimate Extended Edition, in case it's not in the normal edition). At the beginning of the movie, when Hagrid takes Harry into the pub in which he eventually meets Quirrell, a brief establishing shot shows us our first view of Quirrell, in which he is seen standing very unnaturally:

To anyone raised Muslim this is pretty unmistakeably the standing position of the Islamic prayer, with right arm over left, right hand clasping the left hand, and the head bowed to the eventual position of prostration (proof).

I've always assumed that this was something added by either the actor playing Quirrell or the director, for the purpose of leaning (a little too heavily) into the "exotic" vibe that Quirrell already had going with the turban and clothes he was wearing.

Has it ever been mentioned who decided on this particular shot and what exactly their reasoning was for it? Has an in-universe reason ever been given for why he's ostensibly praying like a Muslim, least of all in a pub? Has anyone even noticed it but me, given that the whole shot lasts less than a second?

I think you're reading far too much into it. You've found a pose that matches something you know and are now trying to wrap a theory around it to fit a preconception. This is known as confirmation bias.

Quirrel is supposed to be tinged with "the mysterious East", having gone on a 'journey of discovery' of doubtful truthfulness. The character has been costumed in 'designer' school robes with purple to give a vaguely 'foreign' look [British school robes are invariably black] and something a 'bit like a turban' [to cover the face on the back of his head] which he claimed was given to him by a 'African Prince'.
He does the hand thing a lot, even for publicity stills - but he doesn't favour one hand or the other. It's just a 'device' the actor used.

The pose also could be considered as the 'obsequious servant' or 'quiet monk', or even just an 'I'm being a bit mysterious, though no-one yet knows why' pose adopted by a myriad actors over many years. It's not really a pose that defines only one thing.
'Hand wringing' is also a pose known to psychologists as signifying anxiety, which is definitely a character trait Quirrell displays at certain points.

If I were to be a little less kind about the actor, I might think he'd been to see too many pantomime versions of Aladdin - which of course is littered with watered-down and misunderstood imagery from the Middle and Far East. Let's just be thankful he didn't also have big sleeves he could put opposite hands into ;)
There is a long history of British children's books with themes similar to the Potter series, public school kids hunting 'spies' or other 'baddies'. Vague foreign stereotypes abound in this type of book, and Harry Potter did not escape that entirely, because at least in the beginning it relied heavily on this recognisable genre.

The pose in your picture also has hints of any christian school assembly, when the headmaster says "Let us pray", 200 ambivalent schoolkids in various adoptions of a similar pose - but with more looking around and whispering to their mates. I recall most of the teachers in a line on the school stage looking somewhat similar. The occasional one who still actually wore their traditional school robes would have looked a lot like Quirrell, had we known who that was at the time.

These still poses below have the 'hands', either way up, but also have that look of 'I know something you don't know' with a hint of '…and next - the world' megalomaniac pose. All he needs is a cat to stroke, or a little finger crooked at the corner of his mouth.
It's pretty standard fayre. 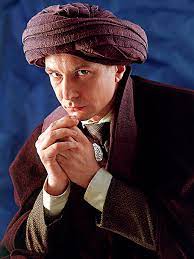 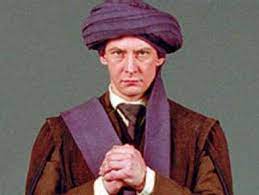 Both hands randomly together plus head down could also just mean "I'm a bit tired and have nothing better to do with my hands, no pockets."

I think your question might be more appropriately worded "Is Quirrell praying the Islamic prayer?"
Answer: No.

Also - The entire Harry Potter franchise is, to my recollection, mainly secular. The school is supposed to be 'multi-faith', but there is little but passing mention of any religion or gods. It doesn't deny the existence of religion in the wider world, it just doesn't really portray it much at all except to acknowledge it exists. It is supposed to be our own universe, after all. To have someone slyly praying in back of shot would appear to be totally out of character for the entire franchise.