Why does Robin make a comment about Nancy having a Tom Cruise poster?

In S04E04, roughly 10 minutes in, Robin enters Nancy's room, and immediately comments about her having a Tom Cruise poster, and Nancy says that the poster is "old".

ZymusZymus
18511 silver badge55 bronze badges
New contributor
Zymus is a new contributor to this site. Take care in asking for clarification, commenting, and answering. Check out our Code of Conduct.
0
Add a comment  | 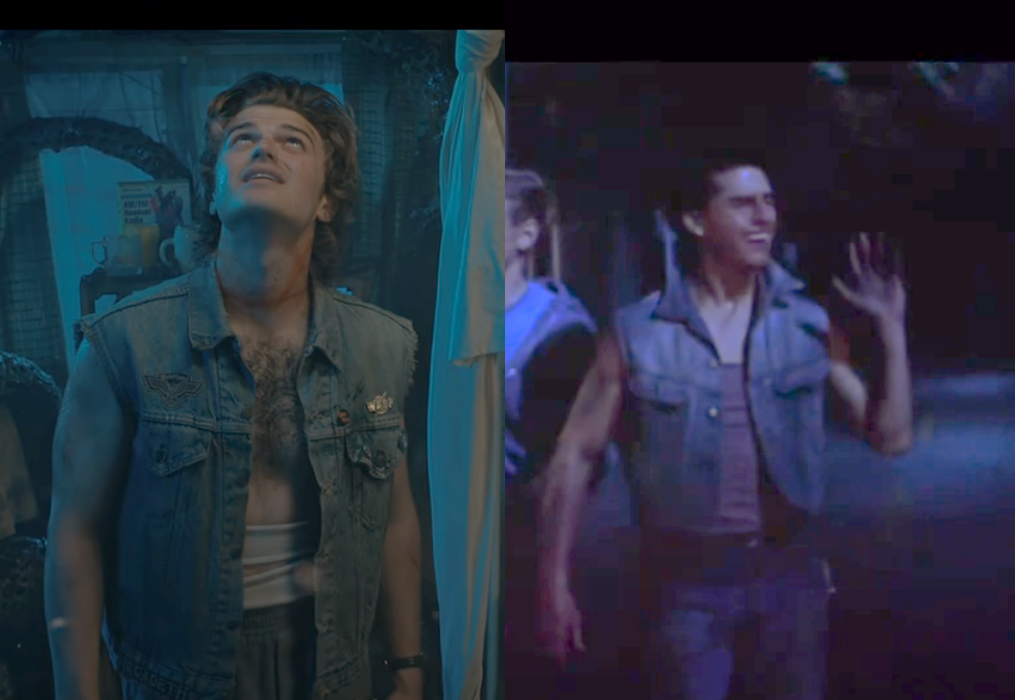 Steve looks a lot like Tom Cruise's character in "The Outsiders" after fighting with the Upside Down bats. Cool reference by the Duffer Brothers!

And Robin of course was shipping Nancy and Steve.

Nancy and Steve even dressed up as "Risky Business" characters for Halloween back in Season 2.- Looper

So maybe it was Robin's nod to Steve that he still has a chance with Nancy as he is her type.

And Nancy replies "Ah, It's... old" to dismiss the fact she likes Tom Cruise, or finds him attractive in any way.

I don't think there's any hidden reference here. We just learn that Nancy is into Tom Cruise.

It's not necessarily meant to be a straight up joke, it's really just Robin reacting to something she found slightly surprising/unexpected regarding Nancy.

You can tell from Robin's tone and enthusiasm when she delivers the first "You have a Tom Cruise poster!" line, that she herself is a fan of the actor.

Stranger Things season 4 takes place in March 1986, a couple of weeks before the original Top Gun would be released. Tom Cruise was not yet the action star in the cultural perception, but he was "already a heartthrob due to his now iconic underwear dancing scene in 1983’s Risky Business" (source).

Robin's tone changes to a teasing one when she delivers the line for the second time. She's like: Wait... you, the always proper and mannerly Nancy - you have a poster of Tom Cruise the heartthrob! For Robin, it's a little glimpse behind the facade Nancy presents to the world.

Nancy recognizes the tease, and she's perhaps feels slightly embarrassed (while being simultaneously annoyed), so she quickly dismisses it by saying something to the effect of: Oh, that ... yeah, that's an old poster, whatever infatuation I had back then, I've grown out of it...

The actual line is much shorter, because Robin proceeds to go through her stuff, so Nancy doesn't have time to dwell on that.

"That's ... [cogwheels turning] old. Can you please not touch anything?!"

To underscore that Robin and Nancy are just teenagers.

The point of the scene is that Nancy is looking for her more adult clothes so that she and Robin can pose as graduate students to gain access to a criminally insane inmate at an asylum. To humorously illustrate the outlandishness of this plan, Robin enters the room and giggles about the Tom Cruise poster, rifles through Nancy's tapes, and becomes fascinated with Nancy's music box. This rash of immature and unserious behavior is all a set-up to Steve's quip to Nancy after she explains her plan:

Nancy: I did a little digging last night, and it turns out this Dr. Hatch [the asylum director] is a distinguished fellow of the American Psychiatric Association and a Harvard visiting scholar, okay? This is a lifelong student of the world, and if we're gonna win him over we're gonna have to convince him we are too. That like him, we are true academic scholars.

Share
Improve this answer
edited 2 days ago
answered Aug 6 at 14:28

Not the answer you're looking for? Browse other questions tagged character dialogue stranger-things .

28
Why does Tom Hanks' character never open up the last package?
14
Why does Walt talk about Victor?
14
Why does Robin call Petyr "Uncle"?
3
Why does Tom not want to leave even if his son is dying?
27
Why does Davos care about Jon so much?
3
Why does Nilo make the dangerous truck trip to the burning oil field?
0
Why does Evan say that Tess lied to him about the phone call?
4
What does Malcolm mean in this joke about Tom Cruise's brush?
2
Why does Ulysses Klaue think this about Wanda?