How does Tuttle actually disappear? 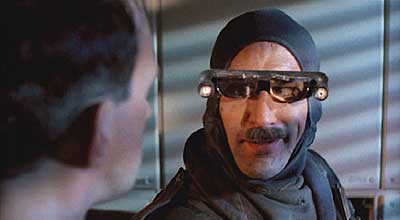 After zip-lining from Lowry's apartment, Tuttle gives a cheery salute but is then suddenly engulfed by flying newspapers.

He battles against them but is ultimately swamped by them and falls the floor in a writhing mass of newsprint. Then, as the wind picks up, the newspapers fly apart to reveal Tuttle has vanished.

Is there any explanation for this disappearing act?

Had he intended to vanish in this way, or is something else at work? What is Gilliam hinting at here (considering the film is thick with sub-text)?

I welcome personal theories but will be signing off on any official explanation ;)

The flying newspaper scene does not immediately follow Tuttle's service-call. It takes place near the end, after Tuttle (aided by Santa Claus and the Easter Bunny) rescue Lowry from Jack the torturer. However, Lowry's rescue and everything afterward, up to the final scene in the film, turns out to be an extended dream sequence, (as foreshadowed by the presence of Santa Claus and the Easter Bunny.) The final scene in the movie is of Jack and Mr. Helpmann leaning into Lowry's view, blocking out his image of living happily-ever-after with Jill, and remarking that he has escaped into his imagination. From Wikipedia:

Realising that Sam has grown catatonic, with a smile on his face and humming "Brazil", the two declare Sam a lost cause, and exit the room as the film ends.

An edited version without this final reveal may have been shown on television at some point. From Wikipedia:

Universal executives thought the ending tested poorly, and Universal chairman Sid Sheinberg insisted on dramatically re-editing the film to give it a happy ending, a decision that Gilliam resisted vigorously. As with the cult science fiction film Blade Runner (1982), which had been released three years earlier, a version of Brazil was created by the movie studio with a more consumer-friendly ending.

Tuttle wasn't engulfed by flying newspapers immediately after repairing the air conditioning and taking the zip-line away (at 34:27). It was much later in the film that he was engulfed by refuse papers and vanished.

If you return and watch the film, after Sam goes back to his work and deletes his girlfriend from the system, he is captured after showing her the deletion paper (at 1:59:22) and brought to his friend for torture. During the interrogation process, he loses his mind, and imagines that he is rescued by Tuttle. It is during this escape (in his mind only) that Tuttle is engulfed by paper and vanishes (at 2:12:35). This is possible because he is only hallucinating it. In point of fact, Sam is still in the chair during this whole episode, as shown at the end (at 2:18:46).

I've always thought of this as a literal pun: after years of not submitting the paperwork he should have for all the unauthorized repairs he's been making, Archibald Tuttle is literally buried in paperwork. This pun is echoed by at least two online commentators, first by The Dissolve:

One of Brazil's most fundamental themes is how bureaucracy chokes the humanity out of people, encouraging learned helplessness at best, and callous indifference at worst. [...] In Sam’s final dream sequence, even the heroic Tuttle is literally buried by paperwork, until there’s nothing left of him. It’s also significant that Tuttle is an outlaw simply because he operates outside the bureaucracy: In a society where nothing can be done without an insane level of paperwork, even repairing an air conditioner is seditious. Similarly, fighting the bureaucracy by trying to point out the Tuttle/Buttle error and rescue Buttle gets Jill stamped as a terrorist, and ultimately killed.

And then by Matthew Dessem:

My personal favorites are the music under the tracking shot through the Department of Records (a particularly manic arrangement designed to mimic typewriters) and the cue during Harry Tuttle's burial by paperwork (Harry Tuttle's theme comes back in a minor key and is gradually overshadowed by the bass line from "Brazil," newly ominous).

An appropriate punishment for the bureaucratocracy that's been hunting him down all these years to impose upon him, I think.

Not the answer you're looking for? Browse other questions tagged brazil .