In what order to watch the alien franchise?

I am a Sci-fi fan but not that much into horror and that is probably why I have seen Alien (1979) just a few months ago. I enjoyed it and was going to watch the next one but am know puzzled because there are so many movies and I don't know where to start.

As far as I get it right there are four storylines:

But in what order to watch this all? Does the order even matter that much?

So far I am quite confused where to start. For example, wiki does not even list the Predator as part of the Alien franchise but only the Alien vs. Predator movies. This seems odd to me. Further, I found lists that recommend in what order to watch the movies but the lists refer to the different storylines individually. For example, see here a list that only says how to watch the original Alien series, leaving out everything else or see here a source that says how to watch the alien movies, the Predator movies and the Alien vs. Predator movies, i.e. this source makes suggestions for each storyline individually. But in what order to watch all this movies listed above?

Watch each series separately in the release date order

While all the movies within the series follow each other (i.e. "Aliens" is a direct continuation of "Alien"), the relation between different series is relatively loose, and it doesn't matter that much. What's more, it sometimes contradicts itself - for example, the first "Alien vs Predator" tells that xenomorphs exist for at least thousands of years (as Predators used to hunt them on Earth in ancient times), but the "Prometheus" suggests that they are a new specie artificially created quite recently (recently to the events of the original "Alien").

Originally, the "Predator" universe was completely separate from the "Alien" franchise, that is until the "Predator II" movie, when the director decided to place xenomorph skull among the trophies in the Predator ship 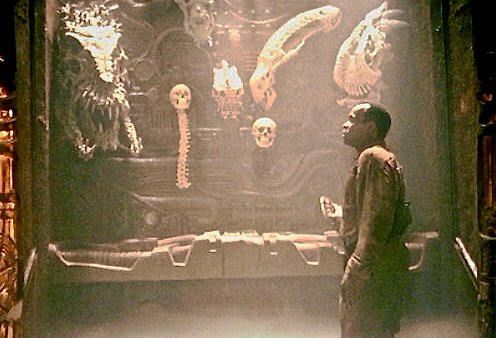 This started a whole series of "Alien vs Predator" comic series, which was suggesting that Predators kidnap alien Queens and then use their eggs to "seed" xenomorphs for the ritualistic hunt. The same concept was used in many computer games, starting from the "Alien vs Predator"in 1993.

The crossover movies seem to follow the same idea: Predators use humans as hosts for xenomorphs and then hunt the latter (occasionally killing some unlucky human). Those movies have just a tiny connection to the original franchise in the form of the names of some characters: In the first AvP Lance Henriksen plays a rich entrepreneur Charles Bishop Weyland, while in "Aliens/Aliens 3" he plays android "Bishop" and the company that Ripley works for is called "Weyland-Yutani" (the latter name is used in the "AvP Requiem" exactly once).

If you insist of watching it all in chronological order (which doesn't really matter between the series) then watch:

Watch them in the order they were made.

There is nothing wrong with Yasskier's answer, but I will offer a third option to go with the two he suggests: watch the films in the order they were made. Alien first, Aliens second, Predator third, etc. There are a couple of reasons why this is a good way to watch them.

You state that you are not that into horror, but obviously you have an appreciation for good horror since you liked Alien. You will very likely find that many of the later movies aren't good enough to trump your lukewarm attitude toward horror. It would be a shame if you missed Aliens or the first two Predator movies because you got turned off by watching some of the other stuff first.

18
Can Aliens see cloaked predators?
3
The movie Prometheus and Alien android designs:
9
Best order to watch the Underworld movie series
3
Battlestar galatica movies and series watch order
7
Where did Alien come from?
8
Did the Predator franchise ever address AvP or AvP2 being canon or not?
3
How did the war between Predators and the Aliens start?
8
Is it possible that a human can survive after a chestburster came out?
19
What do Xenomorphs eat in the Alien series?