What was the significance in Laura tipping over the cross in Logan?

In Logan, in the final scene, Laura takes the cross on Logan's grave and tips it over. Why did she do that?

Here's what I'm talking about:

It's a symbol of X-Men. The very same logo X-Men movies are using. 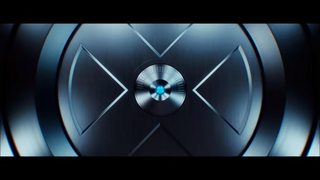 It's not stated in the movie why she did that. In my opinion, she feels that it will link to Charles Xavier and the X-Men he was a part of. Logan has sacrificed his life to save her and her friends, a group of young mutants. She was honoring the man for what he was, what he did.

This Looper article sheds some light on this (emphasis mine),

Laura picks up the little wooden cross that marked Logan's grave and tilts it on its side, making an X. That's a pretty obvious nod to, well, the X-Men. But it's also a pretty beautiful, quiet statement about the kind of guy Wolverine was throughout all these movies. The cross at a gravesite is meant to reflect a person's faith in God, in something higher than them. Obviously Logan wasn't much of a Christian—but he was an X-Man, and he spent his life fighting for the betterment of mutantkind and the ideals of Charles Xavier. The fact that he devoted the final years of his life to taking care of Xavier shows that, despite his insistence that he didn't care about much, he believed in Xavier and his dream of peace and prosperity more than he might have admitted.

Not the answer you're looking for? Browse other questions tagged plot-explanation x-men-cinematic-universe logan .

13
Why did Logan turn back to that specific time in the future
4
Is Logan no longer the Wolverine?
8
How did the wolf characteristics get passed onto Laura?
17
What happened to the X-Men in Logan?
10
What happens to the X-gene?
7
Why did Logan take Gabriela's phone?
10
What was the point of the fake heist?
12
Why could only Logan take Laura to Eden?