How realistic for jet fighter pilots to communicate via gestures instead of wireless comms?

Realistically, for the two enemy fighter pilots, when trying to tell if Maverick and Rooster are hostile or not, choose gestures over wireless comms?

Is this some kind of military practices that is unfamiliar to us?

Not realistic at all, I think.

For a hand gesture to be seen, the two pilots must have direct line-of-sight on each others' cockpit canopies, they must be relatively close to one another, they must remain that way long enough for a human observer to see and recognize the gesture, the recipient must be aware they should be looking for such signals, and the recipient must stop paying attention to their flight instrumentation for the entire time that they are looking for and attempting to recognize the hand signal.

All practical elements of line-of-sight will be frustrated by the need to maneuver in combat. Because of that, opportunities to flash hand signals will be very few and far between. And because those opportunities are rare, no pilot will prepare for such an occurrence. Nobody will prepare themselves to use an communication channel that is extremely limited and unreliable.

And all of this ignores the fact that even when those elements are aligned, hand signals will be impossible to see at night, while sunlight on the canopy during the day can obscure the interior of the cockpit.

It is absolutely 100% realistic.

Hand signals (which also include head movements) and other visual signals are a crucial form of plane-to-plane communication used by the military. Air crews practice these hand signals frequently to maintain a level of fluency that allows them to send and receive them as easily as communicating verbally.

Visual signals can communicate complex thoughts and detailed instructions. For instance, numbers are given with one hand by fingers held sideways (1-5) or up-and-down (6-0/10), so "Come to a heading of 217 degrees" can be flashed by hand almost as fast as it can be spoken.

There are multiple reasons why military pilots use hand and other visual signals.

Military air crews use hand signals between their aircraft in a variety of situations:

Using hand signals poses little difficulty when aircraft are not in combat.

Military aircraft typically fly in close formation during patrols and other missions and one reason is to facilitate visual signals. Maintaining close distance with other aircraft and matching speed and heading are basic skills that pilots master to make formation flying second nature. They maintain visual contact with each other to ensure nothing goes wrong with the other planes or their crews, so they are in position to exchange hand signals much of the time.

Contrary to what another answer suggests, pilots do not have to keep their eyes glued to their instruments most of the time. They constantly scan their surroundings and can easily devote attention to hand and other visual signals. At night, air crews use flashlight signals instead of hand signals, and as the materials I post below demonstrate, pilots can also communicate with the way they maneuver their aircraft.

Obviously hand signals are no use in combat, but Top Gun: Maverick never suggests that they are.

Another answer mentions that signals would be impossible during combat. This is true because in combat planes do not fly in close formation (usually) and the air crews' attention can not be easily diverted to such communications. But nowhere in the movie were hand signals used during actual combat. They were used during close formation flying.

The movie was mostly realistic in its depiction of the use of hand signals.

In the movie, the enemy nation is unable to raise the F-14 on the radio, so the enemy pilot came into close formation with the plane to establish visual communication and find out what was going on with the aircraft--this is very realistic, it's just what an air force would do with an apparently friendly aircraft not responding on the radio. The signal used by Maverick for "I've lost comms" (when trying to fool the enemy pilot) was pointing to his ear and giving thumbs down. This is the actual US Navy hand signal for "I've lost comms."

It is also probably realistic that foreign air forces have their own signals for a lot of things and Maverick and Rooster might not know the ones the other pilot was using. Different cultures have different conventions for non-verbal communications. For instance, a non-Western culture might not have context for the thumbs-up/thumbs-down sign. Given that many signals are so intuitive, there'd probably be some overlap, but it's unlikely all their hand signals would be the same.

In both Top Gun and Top Gun: Maverick's earlier training scenes, the student pilots communicate almost exclusively by radio when flying in formation during exercises. This was actually a little unrealistic, but it was done so the audience could easily follow along. In reality, the student pilots would have used hand signals during formation flying to prevent the aggressor pilots (Viper and Jester in Top Gun and Maverick in Top Gun: Maverick) from listening in to what they were saying and what they were planning.

Here are some US Navy cheat sheets that show some other standard hand signals for plane-to-plane communication. In the last one you can see that even maneuvering one's plane in a certain way can be used to communicate a command. 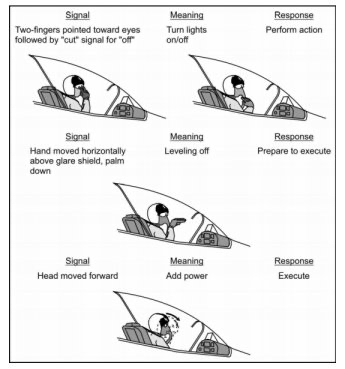 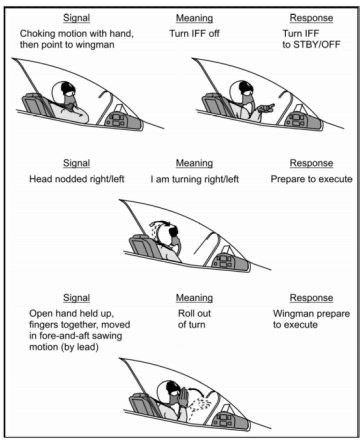 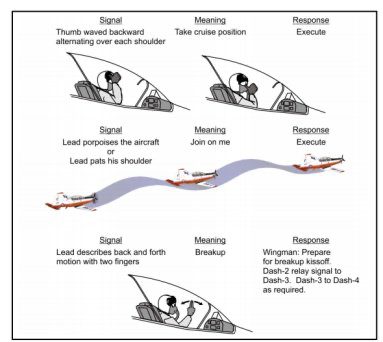 Other uses for hand signals

There is a whole other sign language used between pilots and ground crews. Ground crews must communicate with and direct aircraft on the ground, but they do not have radios and jet noise and lowered canopies make verbal communications impossible. So pilots use hand signals extensively even when they are still on the ground.

Military pilots definitely use hand and other visual signals for plane-to-plane communications. Top Gun: Maverick is highly realistic in its depiction of hand signals. The film's only lapse in realism with regard to hand signals is when the pilots in training don't use them during formation flying to hide their communications from the aggressor pilot; however, this was probably a good directing choice because it allows the audience to follow along more easily.