Was "Hanna Schmitz" responsible for the death of 300 people in "The Reader "?

Did she really do that?

Why didn't they show this part in the movie? 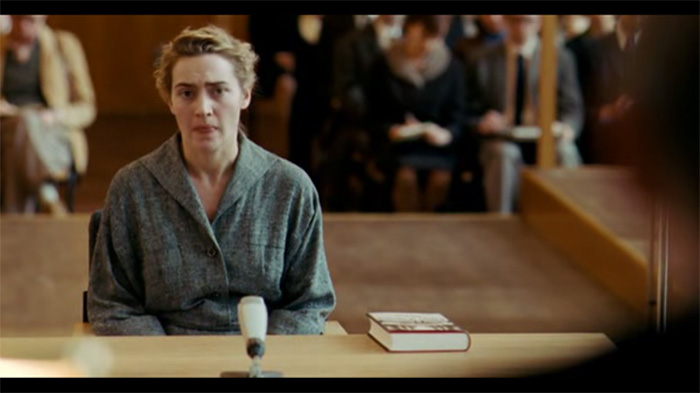 She denies authorship of a report on the church fire, despite pressure from the other defendants, but then admits it rather than complying with a demand to provide a handwriting sample.... she is illiterate and has concealed it her whole life. The other female guards who claim she wrote the report are lying to place responsibility on Hanna. wikipedia

So, she said she was guilty (even though she wasn't) only not to write down something, because she wasn't able. The whole life she's too ashamed of this thing so she never admitted, even if admitting it would have reduced her sentence in prison.

I don't think the other female guards knew about her illiteracy or at list it's not shown in the movie (you could read the book -- The reader if you want to have more details), but I think that's the point: she can easily admit she can't read or write to defend herself. I also think she was not guilty (because the movie led me that way) even if I found several sources stating that the movie contained a cutback scene to her standing refusing to open the doors and allowing the 300 to burn.

According to director Stephen Daldry, the ambiguity is intentional:

I think it's a complex story, and there is a great ambiguity. And one of the things we work very hard to do is to maintain that ambiguity, so people can have different responses to it. Mr. Schlink wrote the book about a generational issue, about how to love. I think he wanted to talk about, for his generation, the difficulties of loving your parents or your teachers or your pastors, and to heighten that issue, put the generational issue into a love affair. How is it possible to love in the context of a generation that's been through [genocide]? Is it possible to love? Is that love valid or invalid? When you find out the truth about the person you love, does that mean that everything you had together is a lie?

One of the stories that Michael reads to her, Checkhov's The Lady with the Dog, was chosen particularly because it is known for its lack of resolution.

The story is a parable which was written to help the generation that came after deal with what came before. The question facing the court is not whether she is guilty or not, but her level of responsibility for this particular event. She admits her guilt with regard to the women whom she sent to be gassed. She demonstrates brutality in her dominant relationship with Michael. Whether or not she ordered the burning, she did not stop it, so she is guilty. That she would accept full responsibility for the burning over the others because she was embarrassed to admit illiteracy is telling - her illiteracy is a metaphor for whatever blindness allowed Germans to allow these atrocities to happen, and no matter what the level of actual involvement, many Germans of that generation carry the guilt as if they had ordered the atrocities themselves. Whatever excuse they have for the decisions they made seem trivial in light of the atrocities, and we see that juxtaposition in Hanna's case before the court. The challenge for Michael is what to do with the love he felt for her, just as the next generation of Germans had to deal with their love for their parents.

Hanna Smitchz was, in a way, responsible for the the death of the 300 people. Her illiteracy does not omit her from the wrongs she had committed when she sent several people to die. Illiteracy is simply an academic disadvantage that may result to social difficulties, but would not necessarily blind her moral capabilities.

She was, unfortunately, framed by her colleagues as the master mind behind the deed. Being the 'master mind' behind the crime would ultimately lead to more years in jail, and indeed she did- she received a life sentence in jail (she got out at 18 years) whereas her colleagues received far less.

The important part is, however, in legal scholarship you can be held responsible for a crime if you were simply a part of the scheme. Your role in the crime will be a factor when the judge issues a sentence, but she is not entirely innocent. Even if Michael Berg did disclose the details on her illiteracy to the judge, she would not be without a life sentence.

Hanna was probably guilty but you would have to question her overall intelligence. In the film she had no understanding of right or wrong. First of all having an affair with a kid.she saw nothing wrong with this and also in court she saw nothing wrong with condemning 300 people to death. I think she was a pawn and was took advantage of due to her lack of intelligence or understanding of situations so ultimately I could not find her guilty.a misfortune misled woman.

In response to the poster above who remarks that Hanna was not intelligent and could thus not distinguish right from wrong, I would like to make a comment.Hanna was not unintelligent. Her actions had nothing to do with intelligence. Hanna's illiteracy resulted in the facts that she could not appreciate or recognize ambiguity or recognize that she--not others--had the power to make choices for herself. Being a prisoner of her illiteracy, she did not recognize that she had the power to choose to open the door. She could not understand subtlety or irony or paradox or "breaking the rules" because she was a "black or white" or either/or thinker. Hanna was both guilty because she sent women to their deaths and did not open the doors, but not guilty because she did not understand that she had the power to make choices that were not the rules imposed on her by her authorities. Tragically, the greatest victim in "The Reader" is Hanna.

Hanna is a morally ambiguous character. I have read that some believe she was based on Ilsa Koch, but the crimes and cruelty that Hanna was accused of pale in comparison to the cruelty that Ilsa exhibited. Certainly Hanna was guilty of the crime at the church, but no more than the other defendants and due to her illiteracy, maybe, just maybe, a little less. Still, she had more than enough guilt on her conscience and when, she was finally able to read about what the consequences were for those people, her guilt became overwhelming. So yeah.. she was guilty, but in more than just the legal sense. After all, the story is about the German people dealing with the guilt of the Holocaust.

Not the answer you're looking for? Browse other questions tagged analysis plot-explanation the-reader .

14
Kid's pictures in Clint Eastwood's True Crime (1999)
11
What did Charlie's aunt do?
12
Did Natalie really help Leonard or was she just using him again?
4
Why did Anastasia make that choice in the end?
2
In the end of "The Reader" does the photo frame owned by the daughter depict "Hanna Schmitz"?
18
Why does Cersei say that she killed her husband?
1
What was Tom's position about Daisy in The Great Gatsby?
5
Was V saving Evey really coincidence?
4
How do you justify the strange behaviour of Edward in Nocturnal Animals?
6
Why was she murdered?