Meaning of the shapes used in Squid Game?

Throughout the series, we see these 3 particular shapes popping up; Square, Circle and Triangle. First we see them printed in the card that Gi-Hun receives from the mysterious man in the trains station. Next, each magenta guard in the contest seem to be wearing one of those symbols on their masks.

What's the significance of these 3 specific symbols?

A circle, square and triangle together have long been associated with Alchemy. It relates to the mathematical impossibility of "Squaring the Circle". The Squid Game, as you know, is geared to be impossible.

Also, if you recall, at the beginning of the very first episode, they showed the squid game in action, then zoomed out on the playing field revealing a circle, square and triangle which made up the field. You can see it here at the 2:05 mark.

The shapes on the invitation card may be reminiscent of the PlayStation logo, but it definitely is no reference to the console.

The circle, triangle and squares are actually letters of the Korean alphabet, written in Hangul, the Korean writing system.

The circle is the letter ‘o’, the triangle is part of the letter ‘j’, and the square is ‘m’, so side by side, it reads ‘O J M’, which are the initials squid game in Korean, which is read as
Ojingeo Geim (오징어게임)

It’s hinted in the opening sequence of the show, where the squid game floor markings in episode 1’s flashback seamlessly transform into the title. 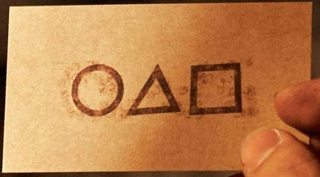 Even Microsoft noticed the similarity… 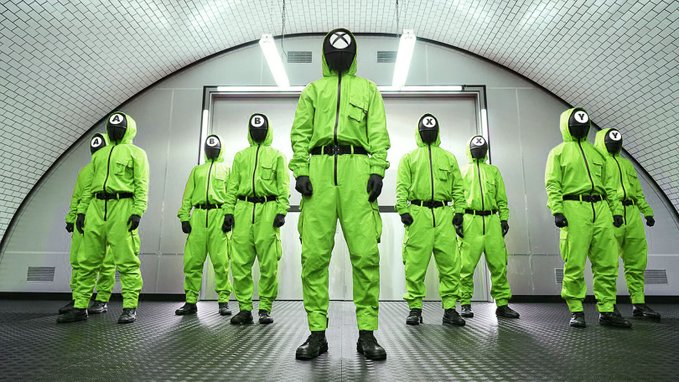 Not the answer you're looking for? Browse other questions tagged plot-explanation squid-game .

2
What is the meaning of the expression used by Dorothy?
3
Are Minipods transporting to another game within a game?
11
Why did the old man (player 001) vote as he did?
5
How do the organizers keep the game secret?
4
How are the guards recruited?
7
Number of players left in Squid Game after the fourth game?