Did Patrick McGoohan personally own the Lotus Seven seen in The Prisoner?

In the opening sequence of The Prisoner, Patrick McGoohan is seen driving a Lotus Seven bearing the number KAR120C. Within the show, it was his character's personal property (in the episode "Many Happy Returns", he asserts that he built it). The car was a signature of McGoohan's character, and seems almost a signature of McGoohan himself. Was that vehicle personally owned by McGoohan prior to the show's creation (and incorporated into his character), or was it part of the show's creation to select the vehicle for his character (the actual vehicle owned by some other party)? I realize the show itself was created by McGoohan, so there could be some blurred lines here, but looking to understand how much the car represented an aspect of McGoohan's own personality vs the character portrayal. 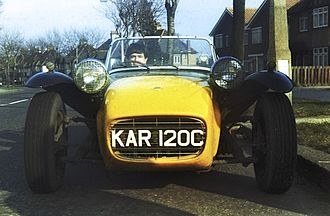 No, but he did choose it

Adapted from an interview conducted by Dave Jones

DJ: How didMcGoohan choose the car for use in The Prisoner?

GN: I've heard this from Patrick himself He was looking for an individual car - something that portrayed this idea of freedom. The word he used was maverick, which I think describes it quite well; something that, sort of, goes with the herd, but is different and runs along-side when it feels like it. He went to Lotus looking for such a car, because they were very well known for producing individual-type cars. Lotus were at the point of phasing out the Lotus 7 and getting round to doing a deal with me. They were very keen for him to have the Lotus Elan, which at the time, of course, was running in "The Avengers" series. There was no way that Patrick wanted that. He saw the Seven in the yard and said: "That's the car I want."

DJ: The car used in the series was the Lotus demonstrator, wasn't it?

GN: That's correct, it was the original Lotus demonstrator. It was used as a press car, for them to test, for photography and that sort of thing. Having done the filming... Patrick then wanted the car back again for use in "Fall Out". By that time Lotus had sold the car... so there was a big panic. "Could we find another car?" So what we did was, we actually came up with a reproduction. So there were actually two cars used in the series. The one used in "Fall Out" is not the original one.

Not the answer you're looking for? Browse other questions tagged the-prisoner .

7
Does The Prisoner have a 'canonical' running order?
9
Is there a canon explanation of the function/purpose of the rotating teeter-totter device in The Prisoner?