What is Charlie Chaplin's assembly line making in the eating machine scene of “Modern times”?

In the Charlie Chaplin film Modern times, Charlie Chaplin's character works in a factory at an assembly line. He's standing in front of a conveyor belt. The belt carries objects that look like a thick rectangular metal plate, about 0.3 m long, with two big nuts sticking out from its top, and no other features visible. Chaplin is holding a ring wrench in each of his two hands, and loosens the two screws on each object with one swift motion. The worker after him strikes each object once with a hammer and chisel. 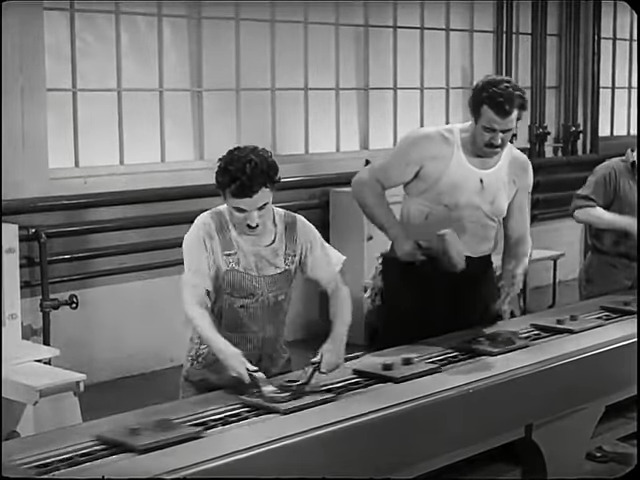 Are the objects that they are making supposed to be recognizable? What are they?

It's probably part of the point the film tries to make that we can't tell what's actually assembled on the assembly line.

When assembly lines became common in the early 20th century, one big point of criticism was that they were thought to alienate the workers from their work and from the product they produced. Previously, a worker had typically manufactured an individual product from start to finish (they were exceptions, but that was the basic idea). On the (then) new assembly lines, the workers only ever did one repetitive step in the process, and probably never even saw the finished product.

The idea was that, in order to experience job satisfaction, the worker would need to identify with the product they made ("I made this shoe, I made it well and I'm proud of it"). But on an assembly line, this connection was seen as broken.

So it's probably on purpose that Chaplin's character (and the audience with him) not only never sees the product he's working on to completion, he doesn't actually have a real clue what he's producing in the first place.

The scene is likely meant to be representative. There's no obvious use for what Chaplin is doing in the scene. The key is that

The Tramp works on an assembly line, where he suffers greatly due to the stress and pace of the repetitive work on the assembly line. He eventually suffers a nervous breakdown and runs amok, getting stuck within a machine and throwing the factory into chaos;

As an Everyman, the audience is meant to empathize with The Tramp (Chaplin) and his plight as a "cog in the machine" in the scene. So it doesn't matter what he's building, just that he's doing it over and over, until it drives him mad.

Not the answer you're looking for? Browse other questions tagged charlie-chaplin .