What's the significance of "Shallow Depth of Field" effect?

I have marked the blurry portions in below images: 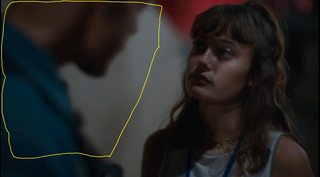 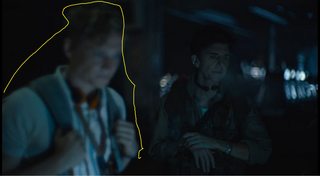 click for larger
This effect is used in lot of scenes.

What's the significance of "Shallow Depth of Field" effect in Army of the Dead (2021)?

This is a fairly standard cinematic technique.
It is used to draw attention to the important element in a shot.

Often in simple over-the-shoulder shots like the first image, it focusses on the current speaker, who is furthest from the lens.

In the second image, it is again pulling to the significant character - presumably for their line or to show some significant reaction to the other character or situation.

There is often a secondary purpose to very shallow shots, which could be somewhat cynically described as "Ooh, look at the pretty anamorphic bokeh!"
Out of focus pin-point lights will show this effect most clearly, displaying as soft circles or ovals.
Bokeh is the quality of blur in out of focus areas, though often confused with just "there is some blur in out of focus areas".
Anamorphic lenses make bokeh shapes that are distorted vertically and look oval, rather than circular.

In this instance I'm not sure why they want you to look at it, as it's poor ;) It shows bright lines round the edges - an effect called 'donut bokeh' and usually avoided.

As a lot seems to be being made in comments about the fact they used a particularly wide-aperture lens for this movie, let me fill some info in on that. [I'm going to skim details because it can be as dull as all heck unless you're really into maths.]

In brief, the wider your aperture, the more light you let in. This results in a shorter Depth of Field [because physics… light rays passing through the edges of a lens produces a less-sharp image than those passing near the centre.]
'Science' has been trying for decades to reduce this factor & some modern lenses really do almost eliminate it.
'Art' says, "We don't want all that, give us our fuzzy edges back when we want them."
This is data recording vs. cinematography, in action.

Another way to get a shallow Depth of Field is to use a longer lens - again because physics [I'm not going into all the detail; it doesn't really belong on here. Look at our sister site https://photo.stackexchange.com/ if you want to research this further].

So… having a shallow Depth of Field is not unique in cinematography - it's just that this particular movie used a 50mm lens with an extremely wide f/0.95 aperture to do it.
Most movies if they want shallow just use a longer lens, a 70mm, or 105mm and 'stand further back'. This changes perspective [again see photo.se] but provides an 'intimate' feel to the shot.

If you need to keep the aperture open to get your desired look, then with digital or film cinematography you must reduce your 'film' sensitivity [ISO… look it up;). If you can't reduce that far enough, then you put filters in front of the lens to block out some of the light. These are known as Neutral Density [ND] filters, and can let you shoot in full, bright sunlight without compromising your other settings. They impart no colour change or any other artefact to the captured image - they are neutral, as the name implies.

Directors quite often have a 'feel' in mind when they're deciding what lenses to use on a movie. I actually occasionally work on one reasonably high budget TV show that quite emphatically uses specific lenses made in the 70s because of the 'feel' it gives the show, and stops it looking like any common or garden 'cop show'.

So, there's an art as well as a science to this, worked out by people several levels of smart better than I. I can quite often spot what they did and how they did it, but there's no way I have the knowhow to have chosen that look myself. I leave that to the experts.

Not the answer you're looking for? Browse other questions tagged analysis effects army-of-the-dead .