In Jungle Cruise, do the adventurers travel upstream or downstream?

In Jungle Cruise, do the adventurers travel upstream or downstream? I'm confused because I recall Dr Lily saying, 'I require passage up river', ie. upstream to a more remote part of the river basin, but later in the film we see them travel down rapids and nearly over a waterfall.

Quite simply, it is a geographical error in the movie (likely) or it is a terminology error (less likely).

If Disney had made a terminology error and they actually meant they would sail downriver towards the rapids then the start location of the movie would make no sense given that towns and villages are more likely to be located at the estuary.

So it is much more likely that the term upriver was accurate and the geography was embellished for dramatic effect.

It would be impossible for two tributaries, flowing from a higher elevation and meeting at the fork to have rapids as they were filmed. Either or both tributaries could have rapids but not as the film depicted.

The source or sources of the river must be at a higher elevation than the fork.

Therefore, should the characters have taken a more treacherous route (as indicated by the script) they could have reached a series of rapids but they would be at the bottom of those rapids, not sailing over them. They would effectively have to portage the sailing vessel uphill and over the rapids to maintain the journey towards the source.

The script called for an upriver journey but took dramatic license with geography and elevation leading to an impossible sailing scenario.

Adding to the previous answer by M. A. Golding, which is essentially detailed and correct. I would like to add actual scenario from the movie where the river bifurcation happened and Lily and Frank had argument over direction of Lagrimas De Cristal and saving two days by using bypass, which is the direction of rapids and water fall.

Lily: McGregor, I think you seem to be taking us off course. We should turn that way. (Pointing to bypass)

Frank: No, we are good. Stay on course. Lagrimas de Cristal is that way. (Pointing to upstream).

Lily: I think you are mistaken.

Frank: I'm not mistaken. I am the skipper. The Lagrimas de Cristal is straight ahead. Stay on course.

Lily: Frank, it says on map that it's passable. Here we have that cliff and exactly that tributary. We can save two days going this way.

Frank: We cannot got that way. We have to go that way. Lagrimas de Cristal is that way. (Pointing towards upstream) We go that way, it's rapids. You ever been down the rapids ?

Lily: No, but I preassume you have.

Lily: Which is why I hired you ! So just turn that way. To the right. Starboard. Whatever you call it.

After which Frank takes the wheel and turns the boat towards tributary. 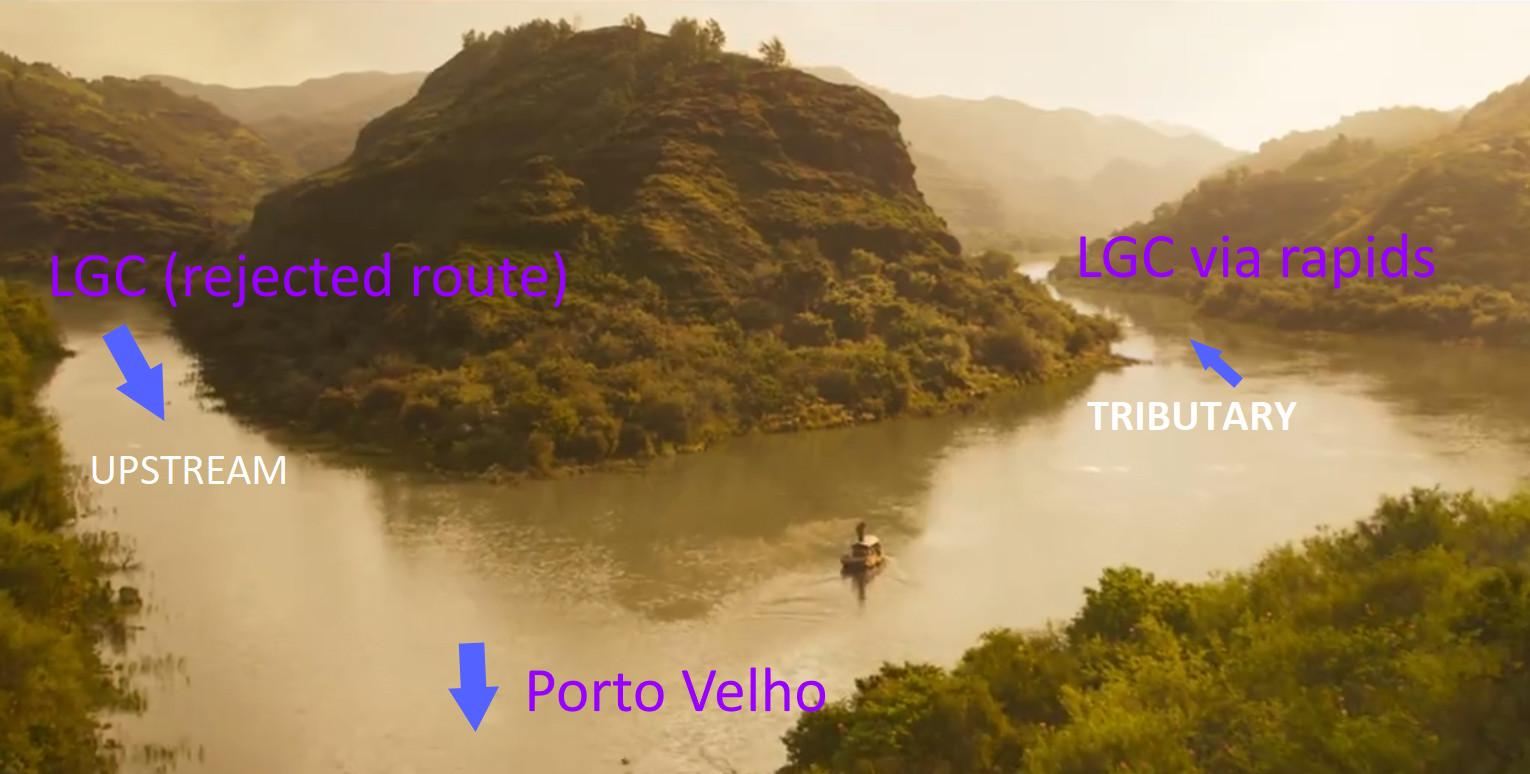 The bypass downstream route opted by Lily takes them to Lagrimas de Cristal. But later they find out that the location of tree is at La Luna Rota. So they had to change the route again.

So when they reach La Luna Rota, where serpent bite it's tail we see that it's at the feet of a waterfall and at considerably lower altitude than upstream tributary which Lily refused to take. 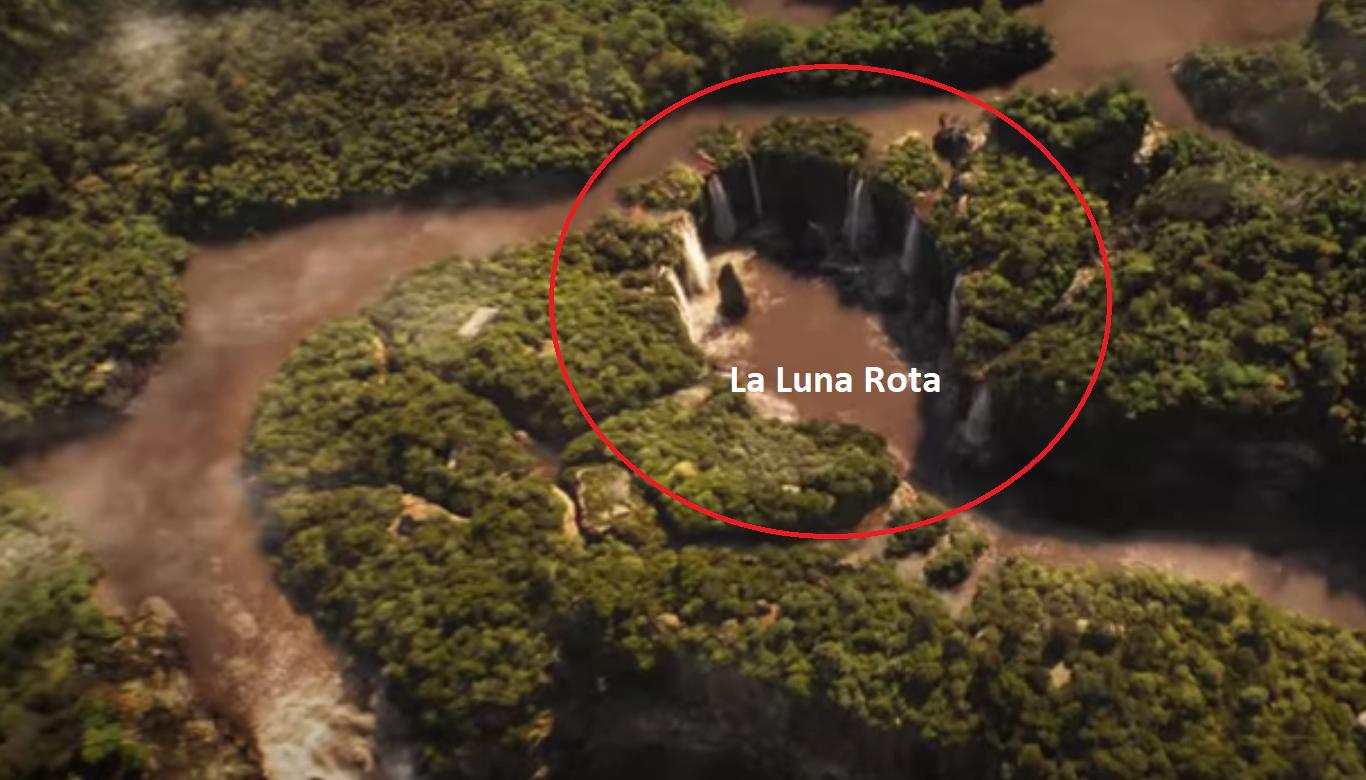 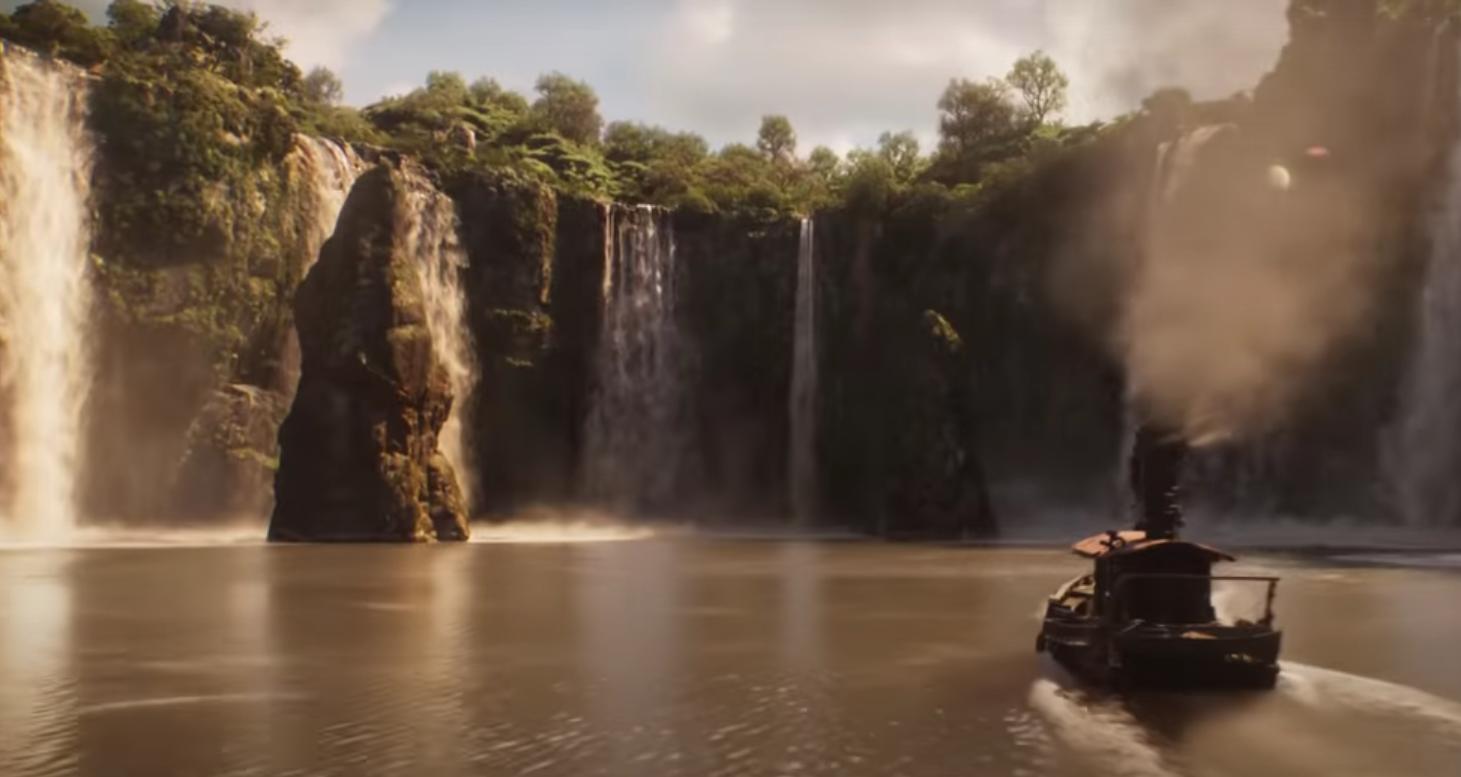 As for the waterfall encountered after rapids, it's just in the way of downstream and have nothing to do with source of the river. As there are many waterfalls and trenches in the way of river, which can be seen at multiple places in the movie.

I remembr hearing her saying she wanted to go upstream in a trailor for Jungle cruise.

If they travel upstream the only rapds and water falls they should encounter when traveling downstream should be in their return journey when their mmission has succeeded or failed. And they should see those same rapits and waterfalls previously when they are going upstream to their destination.

And obviously the river boat can't go up a waterfall!

If they were travelling by canoe they could portage their canoes on land around the waterfall and launch them upstream of the waterfall. Hopefully far enough upstream that the current won't carry them down over the waterfall.

In the movie Fitzcarraldo (1982) a 19th century Amazonian rubber baron has a large riverboad dragged up a mountain and down the other side to take it from one river system to another. The movie is based on a true story, but I don't know if the actual river boat was portaged whole, or taken apart and reassembled at the destination body of water.

And I think the movie Fitzcarraldo (1982) showed that dragging the riverboat up the mountain and lowering it down the other side was a massive enterprise with hundreds of workers.

So it is possible that Jungle cruise, which I haven't seen, has a scene where they employ hundreds of laborers to drag the riverboat around the falls.

There is a place where boats can sail in either direction across a continental divide - boats which are no larger than those leaves, that is.

And maybe people the size of mice could sail a little steamboat up one branch of the stream to the Parting of the Waters and then down the other branch. And that way they might start out going upstream and later go down a different stream and come to the upstream side of a waterfall and plunge over it to their doom.

And there is a larger body of water which does the same, in the rain forests of South America.

The Casiquiare river (Spanish pronunciation: [kasiˈkjaɾe]) is a distributary of the upper Orinoco flowing southward into the Rio Negro, in Venezuela, South America. As such, it forms a unique natural canal between the Orinoco and Amazon river systems. It is the world's largest river of the kind that links two major river systems, a so-called bifurcation. The area forms a water divide, more dramatically at regional flood stage.

I believe that the Orinocco River does have dangerous rapids at Malpures and Altures below the point where the Casiquiares splits off.

In 1968, an expedition was set off by National Geographic and Hovercraft from Manaus in Brazil to Port Of Spain (Trinidad). Aboard of a SR.N6 hoverwork the expedicionaries followed the Negro river upstream to where it is joined by the Casiquiare canal in the border between Colombia and Venezuela. After following the Casiquiare to the Orinoco River they hovered thru perilous Rapids of Maipures and Atures. The Orinoco was then traversed down to its mouths in the Gulf of Paria and then to Port of Spain. The primary purpose of the expedition was filming for the BBC series "The World About Us" the episode "The Last Great Journey on Earth from Amazon to Orinoco by Hovercraft", aired in 1970, and demonstrate the abilities of a hovercraft, thereby promoting sales of this British invention.

Going the other way thorugh the Casiquare River into the Rio Negro, it also has some rapids below on its route to the Amazon River. But as far as I know, no waterfalls.

There are other examples of rivers or creeks which divide and go to separate destinations.

A river will sometmes split into two rivers that flow separated for a distance and then rejoin, forming a river island between the two branches.

I can imagine there could be a river island 50 miles long, and the water level could be 50 or 100 feet higher at the upsteam end of it than at the downstream end. In one branch the river might flow torugh a gentle slope, and on the other branch it might have abroupt rapids and waterfalls.

So possibly in JUngle Cruise they travel upsream along the gentle branch until, somewhere upstream of the island, the engines fail and the boat is swept downstream by the current and into the branch which goes though rapids and over a waterfall.

Majuli, in the Brahmaputra River in India, a non-coastal land mass between two channels of one river, is recognised by the Guinness Book of World Records as the world's largest river island, at 880 km (340 miles).1 Britannica cites another large land mass, Ilha do Bananal, in Tocantin, central Brazil, as an island that divides the Araguaia River into two branches over a 320 km (200-mile) length of water.2

So there should be a few large enough river islands in the jungle regions of the world. But I don't know whether any of them had a navigable river branch on one side and a river branch with rapids and waterfalls on the other side.

So I guess it would take someone more expert in geography than me - who has also seen Jungle Cruise and knows the plot - to say whether there is any place in the world where a riverboat can travel upstream and then find itself on the upstream side of rapids and waterfalls.

Not the answer you're looking for? Browse other questions tagged plot-explanation jungle-cruise .

31
Is the time loop on the cruise ship a second timeline in Triangle?
6
Time Travel & The Girl Who Leapt Through Time
8
How did the giant travel across the sea to Castle Black?
6
When exactly do Gordon's intentions in "The Gift" turn?
10
What's the rush to travel forward in time?
31
Why did The Unsullied travel by sea?
10
What would have happened if their life runs out in Jumanji: Welcome to the Jungle?
5
Was Fritz a Nazi all along?
19
Travel in Guardians of the Galaxy