How and why did Disney reuse animation?

I recently saw a video of Disney reused animation. This clearly shows lots of instances where Disney films reused animations from much earlier films, presumably in order to save cost or money.

Why did they do this?

In that case what benefit is there of copying scenes from another animator's work decades before?

The reuse of animation in this way is attributed to director/producer Wolfgang Reitherman, and was reportedly done because the animation had already proved to work well in its previous use.

From The Real Truth About Disney’s “Recycled Animation” (Medium crosspost), as reported by Jim MacQuarrie regarding an interview with Floyd Norman about a similar viral video (emphasis mine):

He nodded, laughed and said, “That was Woolie Reitherman.” A quick check of Wolfgang Reitherman’s IMDB page confirms that nearly every Disney film shown using recycled footage in these videos is one he directed, most notably the Jungle Book, Robin Hood, the Sword in the Stone, Winnie the Pooh, 101 Dalmatians and the AristoCats.

“It’s actually harder and takes longer to redraw an existing sequence,” Norman told me, “it’s a lot faster and easier to just do new animation, and it’s a lot more fun for the animators. But Woolie liked to play it safe and use stuff he knew would work. That’s all it was.”

Milt Kahl, another of Disney's "Nine Old Men" among Norman and Reitherman, confirms in a 1976 interview with Michael Barrier and Milton Gray:

Barrier: I can't see how the re-use of animation saves money.

Kahl: It doesn't. The funny thing is that most of the time they spend more money trying to figure out how to re-use it than they would [animating the scene from scratch]. I'd rather see it animated from scratch; even if it's a little bit amateurish, at least it's fresh and new.

This primary-source reporting was then cited in the Wikipedia article on Wolfgang Reitherman, as notes 15 and 18 respectively:

During his tenure, he [Wolfgang Reitherman] frequently used "recycled" or limited animation from prior works, presumably because it was a safer method for a quality product, though it was in fact more labor-intensive15, not because it was supposedly cheaper.16,17 Reitherman's use of recycling animation proved to be controversial within the studio as animator Milt Kahl lamented its use stating "I detest the use of—it just breaks my heart to see animation from Snow White used in The Rescuers. It kills me, and it just embarrasses me to tears."18

It is possible that Reitherman's original motivation was saving money or tightening deadlines, and that the animators took a cynical or futile view, but in any case the practice is associated specifically with Reitherman and in available interviews fellow animators felt it was less about money than about using what had worked in previous films.

For what it's worth, MacQuarrie's postscript update cites different reasons for Beauty and the Beast, in a conversation with Gary Trousdale that still cites Reitherman's precedent:

“The scene from Beauty and the Beast that we re-used was done for time, but not money. (well…time IS money, but that’s another story). We were just days from our final deadline to deliver, and we had an entire dance sequence (the last scene of the movie, not the ballroom) to do. Everyone was booked and busy, and we knew damn well that Woolie had established this precedent, so we took the Sleeping Beauty dance, re-sized and re-positioned it, and gave the note ‘Note to Clean-up: clean up Aurora as Belle, clean up Prince Charming as Beast.’”

I'm not sure where to look for citations on this, but the animation & the cell drawing/colouring are two different skillsets.

The animator could design a set of moves without fleshing out the characters. That could come later, or even be redrawn simply using the original moves, rather than needing the full skillset to generate the moves initially. The animation sequence would be drawn pencil on paper, to later be transferred to final cells by a separate department. Saving one entire department of highly skilled artists by reusing an animation sequence fleshed out by cheaper labour is… well… cheaper.

This video shows how Disney made Snow White.

You, of course, only get to see fully-fleshed drawings in this, but grabbing a ream of already-owned paper & setting a different artist to literally copy the moves for a different character in later years will still save a lot of work on movement & pacing. When each one is entirely drawn & copied by hand, that's a lot of time & money saved.

From comments
You can't overpaint an old cell to make a new one. They're painted, in effect 'from the back' so the outline goes down first, then the detail & last the overall colour.
I have a Disney Tinkerbell 'Sericell' on my wall here.. & the face view is the non-painted, clear cell side. 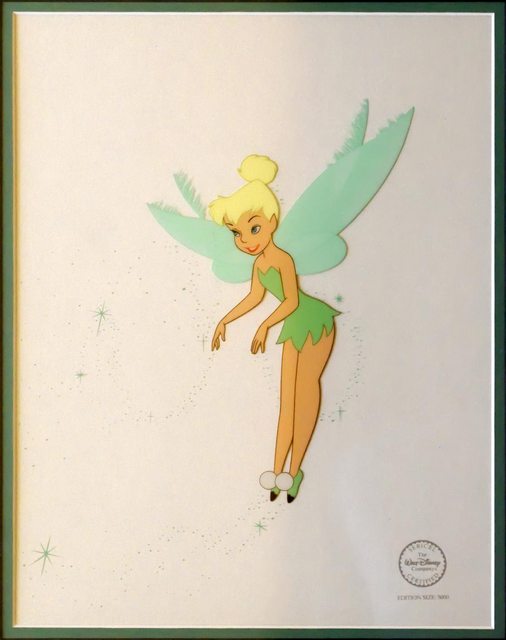 Because the cell floats slightly off the paper background & she's lit from the left, you can see shadowing to the right.

One of the biggest time-consumers of early hand-drawn animation is character placement, particularly during complex moves like dancing. If you've ever seen documentaries or "behind the scenes" footage, you see the animators frequently flipping back and forth between the current frame and the previous one. By tracing over the existing frames, it allows the animators to quickly recreate those complex movements.

The opposite logic is true.

In a current computer age re-animating entire sequences from scratch is easier since you can do automatic tweening using easing and physics simulations (easy to use physics simulation is fairly recent). A lot of the recent work by both 2D and 3D animators is to make use of simulations or constraints to drive the details of the animation (tail movement, gravity, walking sequence etc.) so that you just need to manually animate the major movements.

Getting the details right is the difference between bad and good quality animation. Getting cloth to move right, getting things to bounce correctly under gravity, even getting people to move realistically is hard.

Snow White was famous for being the first major work of animation to get human movements right and not cartoonish. Animators spent months studying people dancing, walking, speaking etc. and analyzed countless film reels to get it right. A simple 10 second sequence could take weeks of study.

Once you have the physics captured in pencil drawings and you know the effort to capture that physics took weeks or months of work then it makes sense to want to reuse that investment and trace new characters over the animation sequence that already captured the correct physics.

6
Which Disney film reused the most animation from previous films?

25
Why have Disney princess films post-2009 all started with the princess as a child?
65
Why do Disney parents usually die?
15
Why don't we have more Disney prince stories?
26
Why do Disney and Pixar animated movies contain the 'A-113' easter egg?
6
Is Disney redefining "true love"? Why?
7
Does Disney now own Howard the Duck, and why?
6
How many Disney princesses end up with older men?
61
Does Disney no longer produce hand-drawn cartoon films?
4
Why are Pluto and Goofy so different?