Why does deliberately causing a coolant leak in main engineering NOT result in catastrophic destruction of the ship?

In Star Trek: Generations, it was this very thing that destroyed the stardrive section of the Enterprise-D. As soon as LaForge recognized that a coolant leak had occurred, he evacuated Engineering immediately and reported to the bridge that a warp core overload was inevitable and irreparable. Yet in the very next film, Star Trek: First Contact, Picard suggests (and Data supports) causing a massive coolant leak in order to eradicate the Borg infestation there.

It is reassuring that my thoughts are echoed by the article on plasma coolant in the Memory Alpha wiki.

The short answer is that it wasn't the coolant rupture (in Star Trek: Generations) that seems to have led to the warp core explosion, it was the failure of the magnetic interlocks within the warp core. The coolant leak was a secondary issue, and one that resulted in Engineering being evacuated, but this seems to be more to do with the health of the staff than the health of the engine

We see a similar issue in DS9: Our Man Bashir.

WORF: The magnetic interlocks are failing... a warp core breach is imminent.

As to whether the loss of coolant was an issue, it may be stating the obvious that there are two plasma coolant tanks. Data only broke one of them. It seems likely (in fact downright certain) that the Enterprise-E can survive on only a single tank, at least for the amount of time needed to effect repairs.

PICARD: The first thing they'll do in engineering is establish a collective, a central point from which they can control the hive. The problem is if we begin firing particle weapons in engineering there's a risk we may hit the warp core. I believe our goal should be to puncture one of the plasma coolant tanks. Data? - Chakoteya - First Contact Transcript 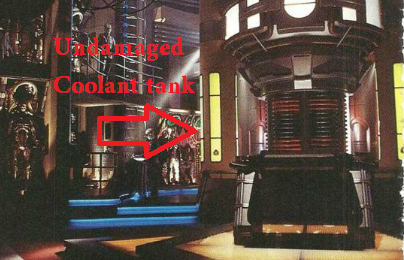 This is backed up by the film's official novelisation

He moved over to a large display padd, activated it, and called up a schematic diagram of Main Engineering. “The problem is, if we begin firing particle weapons inside engineering, we risk hitting the warp core. So I believe our goal should be to puncture one of the plasma coolant tanks.” He tapped another control; the schematic rotated and zoomed in on a diagram of the warp core with two flanking coolant tanks, each marked with a flashing biohazard symbol.

The Sovereign Class Starship is more advanced with the two coolant tanks.

21
Why does Weyland have to hide that he was on the ship?
2
Why does the escaped prisoner not return with help?
7
Why does Superman not see the Kryptonite?
11
Why does the healing ability not help Subah Nur?
15
Why does Sansa not become Queen of the North?
2
Why does the rift-causing machine not get sucked up into the rift as it is closing?
4
Why does the guard not check the pastries?
11
Why does John Wick not just kill the adjucator?
5
Why does Brigitte Mohnhaupt deliberately destroy the execution myth and how accurate is her closing dialogue?