Can anybody identify this painting from Black Widow?

This painting is hanging in Dreykov's office in Black Widow... Is this a famous painting? Can anybody identify it and shed some light on what it contributes to the scene there?

This painting features very prominently in the background of a shot in Dreykov's office, during a conversation between Natasha and Dreykov. That conversation is dripping with "me-too" symbolism, and playing with the power dynamics between the characters. I think it is extremely likely that the painting is intended to contribute to the meaning of this scene. It seems crucial to the understanding of what the movie is trying to say... 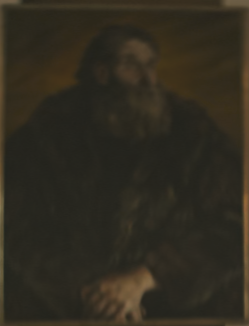 Is this a famous painting?

I don't believe it's a famous painting, though several people seem to think it is a painting of the famous figure Rasputin.

The painting of Rasputin in Dreykov's office sparked a lot of theories in my mind...

...but by the scene with Djerkov and Black Widow standing at the oppsite of eachother there waa a painting displayed of Rasputin.

Posting another answer/hypothesis in case it helps anybody else move towards finding conclusive evidence... I've seen multiple suggestions from Screen Rant authors that the portrait is of Karl Marx. It's entirely possible that one got the idea from the other, given that they blog for the same site.

They also do not provide any supporting evidence for their claims.

Red Guardian's prison sequence reveals that he's covered in tattoos. The most notable are the KARL and MARX across his knuckles (a love he shares with Dreykov, who has Marx's portrait hanging in his HQ) and the Russian coat of arms emblazoned on his chest.

One of them is Karl Marx tattooed across his fingers, which gives him a link to Dreykov, his former boss, who has a portrait of Marx in his office.

That is a knock-off of a Rembrandt called Homer dictating his verses. In the original you can see the Scribe who he was dictating to. The reason his face is painted long and drawn is because Homer was blind. As its painting in there it is Homer contemplating the meaning of his verses.

In the context of being in the office the two of them going back and forth they were trying to feel each other out and contemplating where they stand and feel about different things! This is Rasputin: 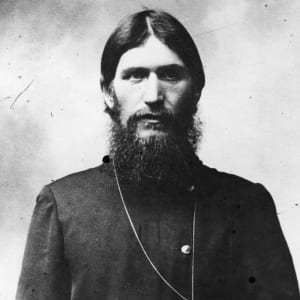 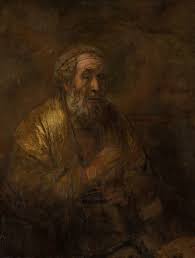 It is Rasputin. Rasputin was a prominent and very influential figure during the reign of the last Russian czar. In fact he was so influential, that he was suspected to have mind-controlling powers over the last Czar and his wife. Mind control is the element linking him to Dreykov I suspect.

Not the answer you're looking for? Browse other questions tagged marvel-cinematic-universe black-widow .

45
What did Black Widow say?
27
Did Black Widow really trick Loki into revealing his plans?
24
What did Captain America mean after being kissed by Black Widow?
20
Why should Bucky know Black Widow specifically?
27
What was done to prevent Black Widow from getting pregnant?
28
In MCU, Hawkeye and Black Widow talked about Budapest. What really happened in Budapest?
50
Are Agent Barton and Agent Romanoff ever called 'Hawkeye' and 'Black Widow' in the MCU?
9
Why did Black Widow give the spear to Proxima?