Tierra y Libertad attribution to Orwell, and films based on books in general

Tierra y Libertad (Land and Freedom) by Ken Loach (1995) tells a story of a British volunteer in the Spanish Civil War.

For anyone who read George Orwell's Homage to Catalonia, it is more than obvious that the film is entirely based on the book. Except for the different protagonist (who is Orwell himself in the book), it often matches in minutae details; as it feels, quite deliberately (like the exact same type and age of rifle he gets).

Yet, Orwell is not credited in the film at all. As if the book didn't exist. Furthermore, typical articles about the film, like the Wiki linked above or IMDB, either don't mention the association or mention it in passing.

I find this bizzare. The book is famous and the association, as I said, is too obvious. It seems that the film authors wanted to acknowledge it but were prevented from doing so somehow. Apart from deliberate technical matches (which were artistically not necessary), I suspect the director tried to add "hints" like this: 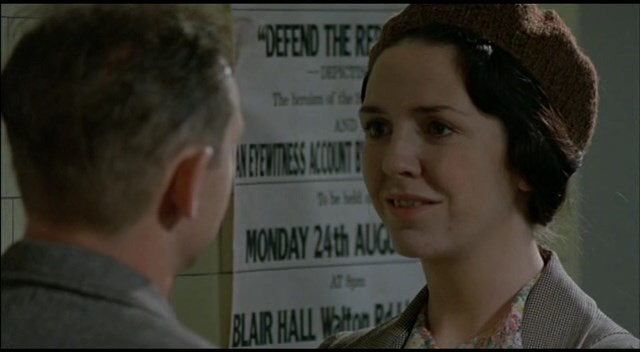 (Blair Hall was a real place in Liverpool, where this scene is set, but it feels it was prominently inserted here as a reference to Eric Blair, which is the real name of George Orwell).

Anyway, what could be the reasons for this situation? If not for this film specifically then for similar occurrences in general?

An obvious answer would be the copyright holders for the book, who didn't like the film for some reason. (By the way, Orwell is in public domain from this year (2021) in most of the world, but this wasn't the case in 1995). In fact, Sonia Orwell was a kind of guardian who could do it. But she was long dead by 1995.

However, I believe that removing explicit associations would not be sufficient to clear the copyright issues when the film so closely relates to the book. I can only imagine what Tolkien Estate would do to anyone who'd made a LotR film with just names replaced. So the question remains...

I haven't seen the film, but based on the Wikipedia article and IMDB information linked from the question, I think it's simply a matter of the story being different enough from Homage to Catalonia that, while they share a setting and some plot elements, the film isn't an adaptation of the book.

On the other hand, all the similarities between the two stories can be attributed to the setting, which is based on a larger historical record of which Homage to Catalonia is merely one part. There really was a Spanish Civil War, some contingents really did elect their officers, the Comintern really did have it in for the POUM, they really did use 40-year-old rifles, etc.

Not the answer you're looking for? Browse other questions tagged copyright .

6
What are the rules regarding usage of non-featured songs in films?
8
Rights to "Gotham" and Batman after Fox's proposed sale?
7
Does Disney now own Howard the Duck, and why?