Why does Donald Curtis have a Dutch/Netherlands flag pin displayed prominently when he is clearly American? 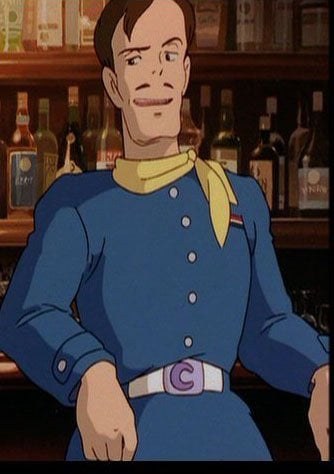 In the movie Porco Rosso, why does the character Donald Curtis have a Dutch/Netherlands flag pin displayed prominently when he is clearly American?

I could be wrong about the flag being Dutch/Netherlands. But it is definitely not a United States flag.

As to the patch itself, I don't know anything definite, so this is speculative.

He is (for sure) meant to be American. In the manga, his name is Donald Chuck and he flies a Curtiss, and his backstory is that he won the Schneider Trophy twice. He still flies the Curtiss in the movie.

Americans won the trophy twice in Curtiss planes and I note that the Army Air Service version of the Curtiss would have had three colored bars on the tail fin. In the manga and movie, the paint scheme is different, but I am certain Miyazaki, a lifelong admirer of aircraft and aircraft history knew about the red-white-and-blue bar paint scheme. I assume he decided to use it on the flight suit to call it out and also to kit out the suit in a manner that was easy to draw 24 times per second. Similarity to a Dutch flag is probably accidental.

A cursory image search of "Curtiss R3C" brings up very many images of actual and model planes with the tail fin scheme.

One of the Scheider Trophy winners was Jimmy Doolittle, who led the Doolittle Raid depicted or heavily referenced in a number of movies: 30 seconds over Tokyo (1944); Part of Pearl Harbor (2001); Chinese Widow (2017; tangentially); Midway (2019)

Not the answer you're looking for? Browse other questions tagged character porco-rosso .

100
What significance does Mike Yanagita have in Fargo?
8
Why was a female selected for M's character in James Bond?
20
What is the significance of “The Girl in Red” in Schindler's List?
8
What happened to Robert Englund?
11
Why would being US Navy prepare someone to be a great velociraptor trainer?
2
Does Fredrick Zoller feel remorse for the actions he's famous for?
4
Was there a purpose to Margaret Allison Hart being introduced in Season 7?
4
Why does Ty have so much money?