What would've been a satisfactory "ending" to the film, in the view of the omnipotent monster?

The indie film Resolution (2012) mostly stays obscure, but I decided to watch it because the premise sounded interesting. It begins with Michael, a graphic designer now living in the city (perhaps Sante Fe or Flagstaff?) with his pregnant wife finding out that he needs to come help his drug-addict friend from HS, Chris, end his dependencies and battle withdrawal symptoms. Michael tries to make him go to rehab; but he said "no, no, no". 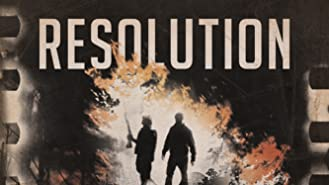 He chains Chris inside the cabin, waiting for him to act less erratically; however, Michael begins to experience intensifying strange occurrences, including clues to disturbing stills and video footage of French archaeology students acting strangely, as if ritualistically performing a dramatic presentation for some unknown audience.

Additionally, he learns that Chris is illegally squatting on Native American owned land, and must deal with not only the local native representatives (Byron, etc), but also a variety of weirdos such as local drug addicts from High School (Micah, Billy) and UFO cult members, and a charlatan attempting to purchase the cabin illegally.

The movie commits a cardinal sin and kills off a dog. Then Michael meets with the remaining archaeologist, who describe the students' behaviors as strange (mutually accusatory for alleged theft and moving property, writings, IP) but also systematized like the beginning, rising conflict, and resolution of narratives in fiction and film screenplays. In this way, the film begins to become blatantly self-referential.

Toward the end of the film, Michael can't control his own technology, which begin to operate on a dimension of space-time beyond our comprehension. His laptop and projector showcase current events in real time, as if someone is watching them and recording them, but also depicts vivid future scenarios involving their death, almost as if some higher force wants them to use this information to craft an ending cooperatively, but without fully depriving them of autonomy: perhaps affording actors some degree of self-determination makes things much more interesting to this Unnamed Fathomless Omnipotent. (I can sense Kubrick squirming in his grave and Hitchcock denouncing it; Fincher is still alive, so don't tell him that this movie exists).

In one case, they're beaten to death by Billy and Micah; in another, Byron loses patience and murders them with firearm.

The leads opt to avoid both endings, allowing Byron to eliminate Billy and Micah and burn down the cabin, while Chris finally relents to register for rehab, even though "he ain't got 70 days". This conclusion, including the ultimate explosion of all affecting substances, is viewed as the ideal outcome not only for Michael and Chris, but also to us, as viewers.

Does the film provide any clues about how It/He/That wanted Michael and Chris to resolve their story? What was an ending that would be appeasing and gratifying? Do Michael and Chris necessarily need to die, for It/He/That to be convinced and contented? Was the ending that they produced not good enough in some other way? Or will the Unnamed Fathomless Omnipotent force them to reshoot over and over again until they go crazy? (Okay, in this case we might get Fincher back on our side, as long as we do at least 16 more takes).